One of the pleasures of my position of tour boat captain for Aerie Ferry Tours in New Bern NC is the need to bone up on local history.  Between the rail road swing bridge and the Hwy 70 high rise bridges is the Lawson Creek harbor area.  The basic tour boat talk runs,   “ there once was a commercial boat yard which has resulted in a huge amount of underwater pilings and debris which can foul anchors.  The harbor now attracts long term anchorage of boats (some of which sink), but few knowledgeable cruising folks due to the hazards to anchoring.” 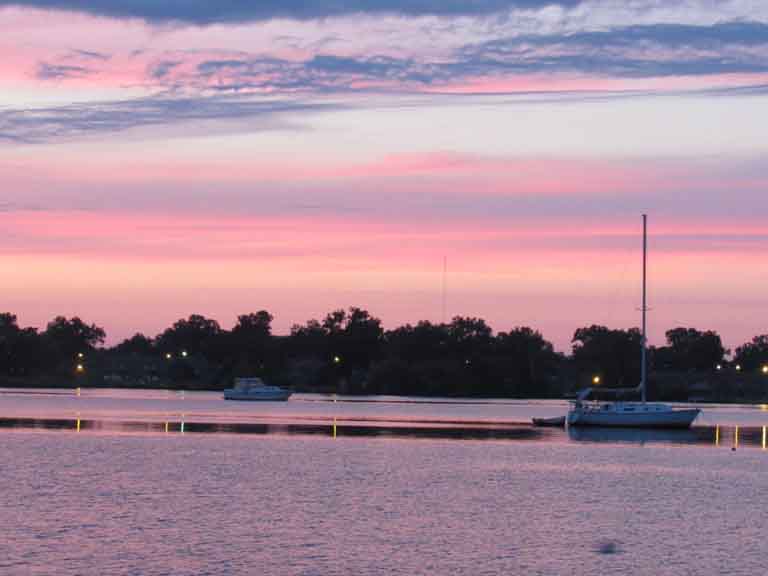 I was happy giving that simple story.  But it kept nagging at me that there might be much more to that story.  A bicycle ride to New Bern’s Lawson Creek Park further stirred my interest.

This image is of the gear system used by Barbour Boat works to launch and haul boats on its rail system.  Note the size of the chain! 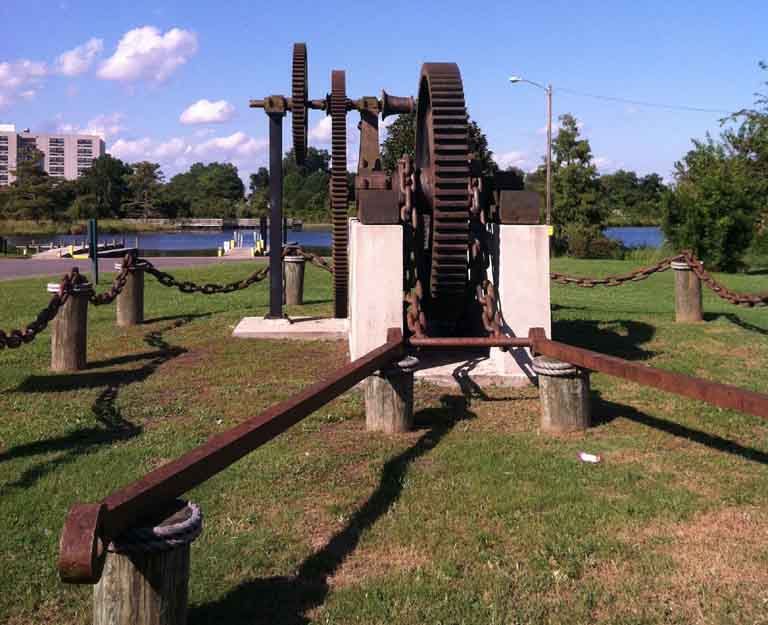 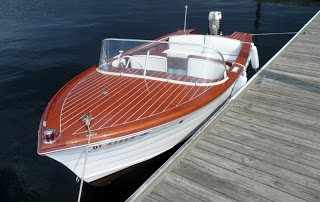 A run about style built by Barbour in the 1960s

“Barbour Boat Works Inc. was founded by Herbert William Barbour in 1932 on the Trent River at New Bern, North Carolina. The company initially specialized in wooden vessels. It remained a small company until the coming of World War II. At this time the company began receiving U.S. Navy contracts for ship construction. They began expanding their facilities and soon had a payroll of over 1200 people. Ships built included salvage ships (among the largest wooden ships built for wartime use), net tenders and mine sweepers. In the coming years, more vessel contracts were obtained from the Navy, Army and Coast Guard. These included a number of 56′ troop transport vessels for the Vietnam War effort (five of which were fitted with helicopter landing pads, making them the smallest carriers in the U.S.), a prototype steel fire boat and steel tug boats.

Following the war, the company began construction of both private and commercial vessels. The private vessels included rowboats, racing class sailboats, normal duty sailboats, outboard runabouts and utilities, inboard cruisers and a few larger coastal cruisers. The bulk of the private vessel construction consisted of 14′ utilities and 19′ and 21′ cruisers in both outboard and inboard configuration. These types sold on a worldwide scale. Commercial vessels included trawlers, ferries, tankers, fishing vessels, barges and tugs.

A 155-foot seagoing tanker, delivered in April, 1972, was produced by the company for a major oil company. At the time, this was the largest ship to be built in North Carolina since World War II.” 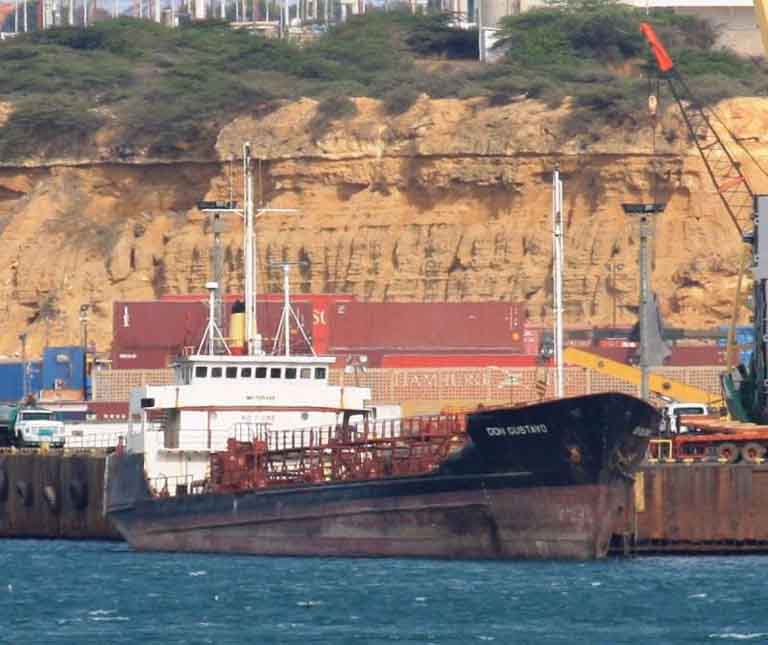 The Esso Islander had been built in 1970 for Bahamas fuel deliveries. She was scrapped in 2005 after a couple of name changes 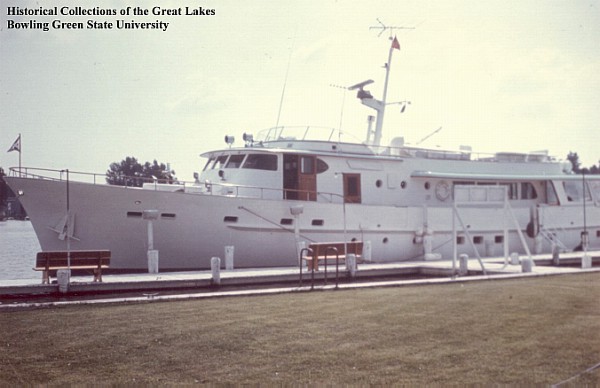 During the company’s long history, a number of subsidiaries were formed by the company. One of these, formed in 1955, was Reggie’s Outboard Service. This subsidiary featured a complete stock of boats, motors and sporting goods, as well as a complete shop for servicing outboard motors. Also, in 1957, a complete Diesel Parts Supply division was added. The same year, the shipyard made the transition to steel construction, its first steel vessels consisting of three ferries for the state of North Carolina’s eastern ferry system. The company also eventually expanded its services to accommodate repairs and conversions of vessels for both U.S. government agencies and private business. In 1945 a propeller reconditioning shop was installed at the plant, and in 1970, a complete machine shop was relocated there. The company closed in the mid-1990s.” 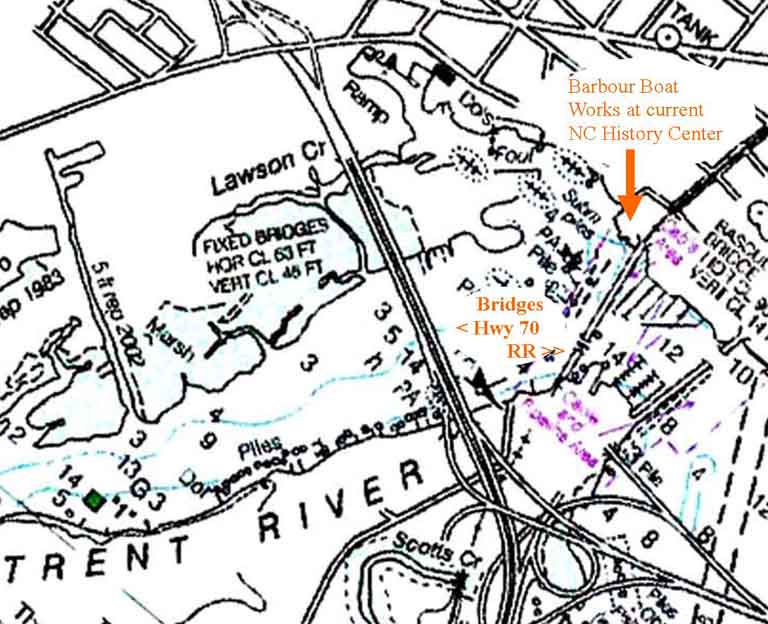 Two links worth following are:

The Aerie Ferry runs tours on the Trent River in New Bern, NC.  Sights include the entrance to Brice Creek at the Coatan National Forest and continue for a total of twelve miles, turning at the homes of Nicholas Sparks; and former NC Governor Beverly Perdue.

The story / blog of Yacht A Fun, a Gemini catamaran sailboat, traveling the ICW and east coast with insights to the extended cruising life. Barbour Boat Works