Standing on the OSB panels, previously cut and placed to protect our cockpit floor from engine work related damage, I gazed upon the Westerbeke 30b engine.  Painted Texas Pete orange over Westerbeke catsup red, it was obvious that function over style had prevailed in the paint job.

Ultimately, the come-along attachment point, on the lifting chain, had to be moved forward to add tilt to the engine so it could better be passed under the seat back area of the compartment.

Thankfully the roller system of the gantry worked like a charm.  A small third block and tackle was added – first to clear the oil pan from the front lip of the compartment; and then to aid in keeping the couple system from dragging on the compartment floor.

It was a meticulous and slow project.  Thanks go to fellow boaters, Stephen and John, for their help with the effort.

To get the isolator feet in correct positions for their bolts, cut bent nails were dropped in as guides. 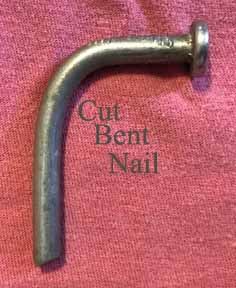 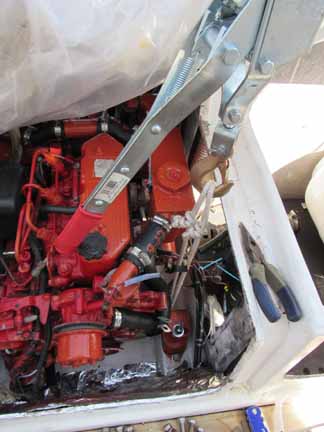 After lunch, and an hour and a half nap- I worked on bolt installation.  Seven went in fine.  The eighth is located under the impeller pump housing and beside the starboard compartment side wall flange.  After an hour of attempting to fit my hands in small places, I realized I was tired and that I need to quit for the day.

At 2:30AM I awoke to the solution of unbolting that mount’s arm to gain better access to the bolt and hole.

That morning , with much hugging of the engine (really- my right elbow was on the bilge floor and fingers just touching the bolt head) and two hours of effort, the bolt gained thread and was partially turned in.

That afternoon the gantry was disassembled and parts taken to buddy Dave’s workshop.  Long 2x4s will be repurposed.  Short stuff will be part of the fall camp fires he so much enjoys.

Hurricane Irma was coming.  The 4 foot by 4 foot work float could become airborne if left in the water.  Given the amount of accumulated duck poop that had developed, I opted to trash the float.  The amount of mussel shells was amazing- and heavy.  That messy project ended the day.

Diann and I had showers and walked the docks with a glass of wine to end a long day.  We continue living the boating life on our Gemini catamaran.   For now a “Yacht a Work” is completed.  More minor stuff can begin after Irma passes through.

The story / blog of Yacht A Fun, a Gemini catamaran sailboat, traveling the ICW and east coast with insights to the extended cruising life.  Westerbeke engine work