I awoke before the sun was truly up. Zoey had to pee and I was ready to begin my day.

The Bean Coffee shop was already open. After Zoey wet the grass, I took my laptop and a client’s real estate file (yes I’m still doing a tad of brokerage—- from the boat) to The Bean.

Hot coffee and an hour later I had the last of my residential listings posted into the Catawba Valley MLS. My view during all of this…… 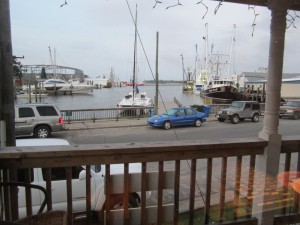 Great coffe at The Bean and having this view as I entered MLS data for a Hickory, NC townhouse for sale

From the street (the afternoon before)…………..

What a sunset experience

We had planned to remove as much un-needed heavy stuff as possible and so, at 9AM, I borrowed a bike from Inland Waterway and peddled to Deaton’s. After driving the Jeep back to pick up Diann, we loaded multiple items, including the home sized dehumidifier which has served so well since December to keep mildew out of the boat, and went to Village Storage to off load the stuff.

Back at the boat—-after multiple other business calls which were part of the property management wind-down, I got a call from Deaton’s………….we weren’t needed until after 1PM.

So what to do for several hours? How about take the 300 pound dinghy off the back of the boat and load it on our trailer which is parked at Village Storage. So for a third time in less than 24 hours, I borrowed the same bike & peddled back to Deaton’s to get the Jeep.

At Village Storage, we had to drop the hitch mounted cargo rack in order to replace the hitch to pull the trailer. But, wait—there’s more. Remember the Alliance dinghy we had put on the boat trailer? To make room for the YAF dinghy, it had to be lifted onto the black utility trailer that is now also at Village Storage!

Returning to the Town Dock, we had lunch.

We dropped the Avon into the water and I re-inflated the boat. OOOPs, one needs to be sure the fuel line is connected to the motor for it to run.

I motored the dinghy to the launch site and Diann drove the trailer. Loading the dinghy was a snap. Returning to Village Storage, we were able to park the trailer and cover all three boats on two trailers. Removing the pull-ball assembly from the hitch, were able to reinstall the cargo rack. Getting that Alliance dinghy sold is becoming a priority!

I dropped Diann off at Inland Waterway Provisioning Company to buy new sunglasses, and then returned the Jeep to Deaton’s and rode the bike back to see her new glasses- and return the bike for the third time. (The least we could do for Inland Waterway was spend money.)  Thank goodness Oriental is small………….or all the peddling would have been a bear! 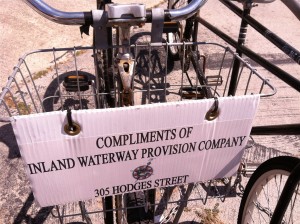 Once on the boat, I had anxiety about how it would back into a stiff breeze. So, I called a Gemini owner who had befriended us the night before. (They are having work done on their boat at the facility across from Deaton’s and had seen us at town dock—and stopped by to meet.) Mike’s reassurance of the boat’s ability made me feel that I should have zero issues.

With only minor operator error in cranking the Westebeke, the departure from town dock was effortless and smooth. Using the “red right returning” lessons, the entry went well.  Past boating was a good base for backing into the evenings berth.  Deaton’s staff were good line handlers. 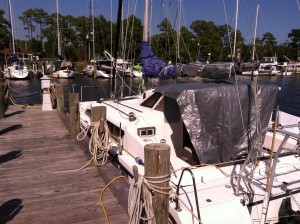 Tarped up the cockpit to block the late afternoon sun. AC is running !

After arriving at Deaton’s it was shower time. Diann and I were both tired. No need to wonder why!

It’s 6:30PM. Diann and I are at M&M’s restaurant having $1.50 draft beer and glad to be starting phase two……….tomorrow after a good meal!