M&M’s offers Killian’s and Bud Light on draft for $1.50 on Wednesdays!   After a long hot day a cold beer, or three, seemed like a good idea.

This blog needed updating, so Diann and I went to the bar area, of the restaurant, and did the WIFI thing.  Two hours, two glasses of water, and two Killian’s later and I was hungry.

The restaurant has a modest range of fare- from basic, and seafood themed, sandwiches to entree’s.  The soup specials were corn-crab chowder; and split pea.  We opted to start our dinner by share/sampling the soups and having “half salads”.  The salads were so large we ended up with soup and salad for dinner and didn’t move on to a sandwich or shared entree. 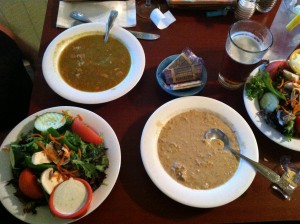 One might see this photo and think the view to have been bad.  Not so.  Since Oriental is a shrimping town, as well as boater-tourist town, dining on the harbor includes aspects which are part of the reality. 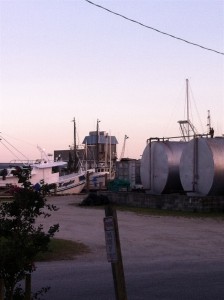 The chowder had an intense spice, which I believe was Anise.  Our waiter said he asked the cook but was told, “just salt and pepper”.  It was spiced with a licorice flavor- and was very appealing.  A secrete ingredient perhaps?