Sailrite snap screws work well for attaching canvas window covers. There can be a potential leak issue however. On our Gemini catamaran, Yacht a Fun, the snap screws were turned into existing screw holes. Initially, having caulk injected before snap screw insertion caused a decent retention and stability of the screws after the caulk had cured. 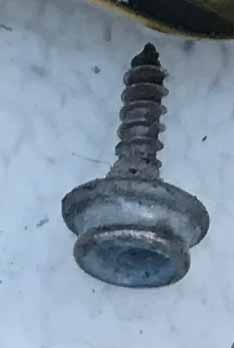 Over time, however, wind against the canvas, and popping the canvas off the snaps, caused a wobble of the snap screws. My quick fix of using butyl tape worked well in sealing against water intrusion. Wobble today, though, can mean leaks tomorrow. So, it was time for a full repair.

One of my dock buddies suggested using a match inserted into epoxy. Using a match would allow a good bite for the screw threads, and would be more forgiving of re-application of the
screws than would drill holes on the center of the new epoxy.

Task one was to put up a shade. Our 14’ long whisker pole works well from which to suspend a tarp. (Note how weathered the tarp has become. Flecks of brown and grey on Yacht A Fun’s deck indicate the tarp is now less than waterproof. As a sunshade it works well.

Used dental picks are great boat tools. Ask your dentist for broken ones. The material is of quality and free.

Aligning with a pencil eraser helps.

Pressing of the tape stretches the material to follow the hole’s contour. 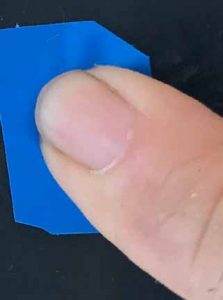 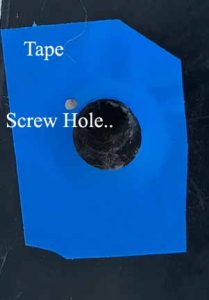 The epoxy of choice is West System’s Six-10. A small, Syringe style, squirt tube is easily filled by the Six-10 caulking tube. Though it would be possible to apply the epoxy directly from the tube, control of the flow would be very difficult. 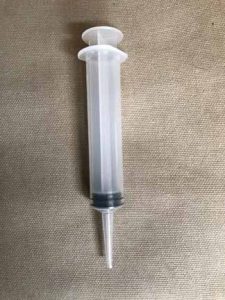 With epoxy squirted into the hole, wooden pegs (matches) can then be inserted. Diann individually scored the matches such that when broken, the break should be uniform vs. splintered. (On that point, we’ll see after the epoxy has cured and we go on to the next phase of the project. 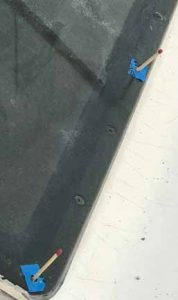 The story / blog of Yacht A Fun, a Gemini catamaran sailboat, traveling the ICW and east coast with insights to the extended cruising life. Snap screw hole filling