It was our goal to be in Oriental NC for the New Years Eve running of the dragons.   And make it we did.   We left Yacht A Fun at around a quarter till 7pm.   As a result we found a decent parking spot near the Oriental Inn & Marina complex; which like The Bean Coffee Shop is the center of Oriental’s harbor activity.

The official countdown screen was mounted on the bow of a sailboat tied on the Town Dock- in the center of the event’s route. 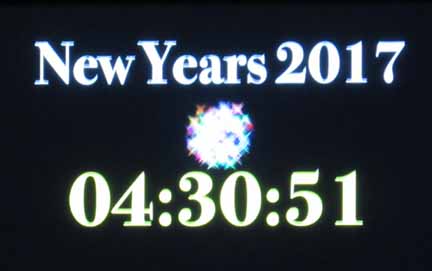 Leading up to the initial running of the dragons, drummers kept a continuous roll of the same beat- for well over thirty five minutes. 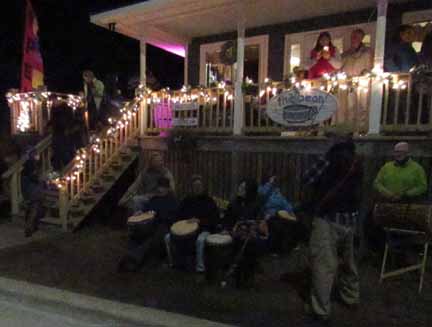 Drummers in front of The Bean 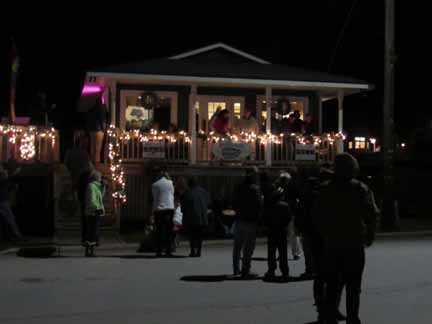 The Bean is across from the Town Dock

At eight PM the first running of the dragons was done.   Attendance exceeded a thousand.   Honestly the count could have reached a couple of thousand folks.   (I based my 1,000 estimate by pacing the width and length of the section of street that was blocked off.   At 9 square feet per person the count is 1,000.   Actually folks were crowed much tighter than being in the middle of their own 3 ft square of space. So we could as easily guess 2,000 people were there).

Many people reached out to touch the dragons for good luck.   Pots and pans were banged to scare away evil spirits. Noise makers of all kinds were sounded during the running. 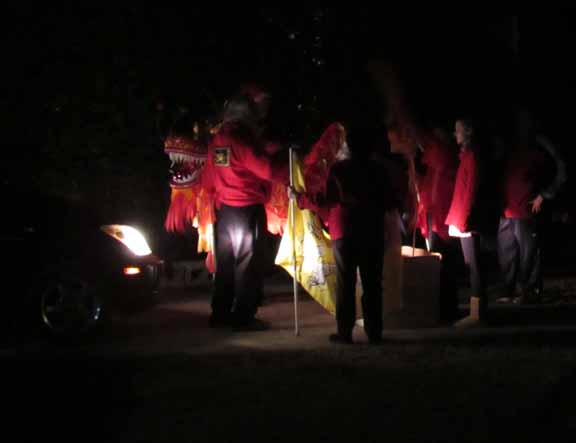 Using headlights, the dragon teams were able to get ready. 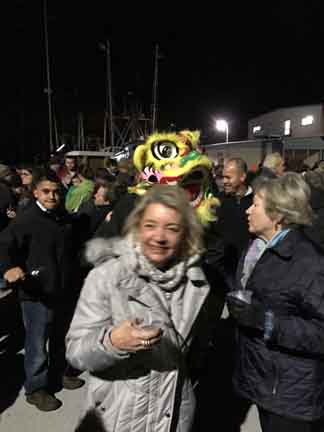 Meanwhile the crowd got prepared. 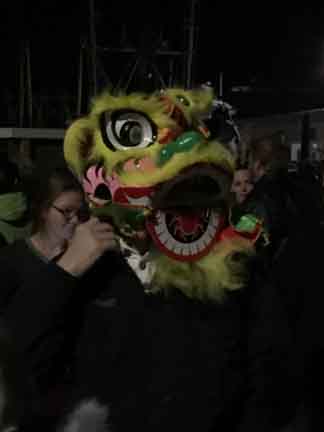 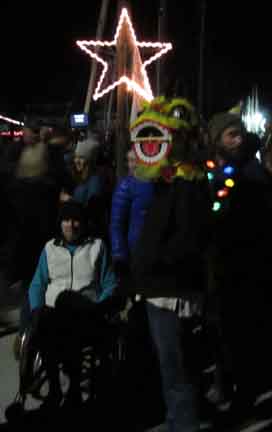 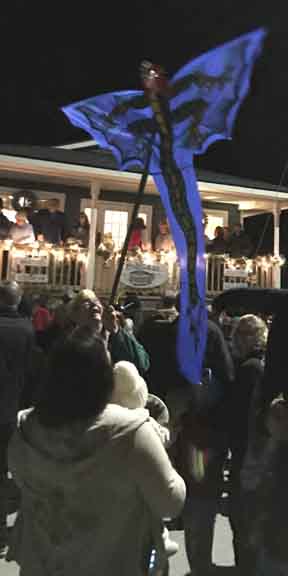 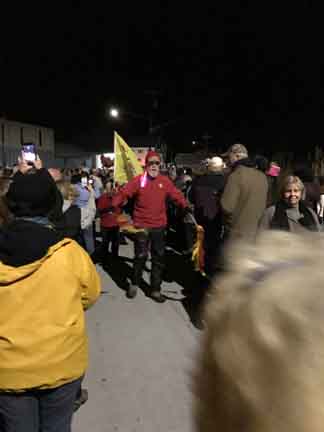 Coming of the second, which was smaller than the first, dragon 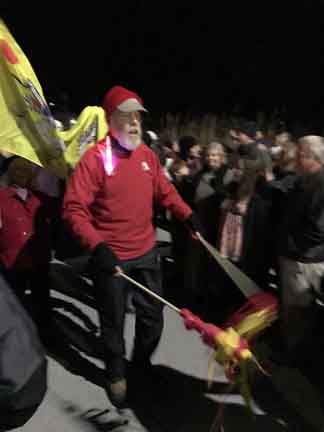 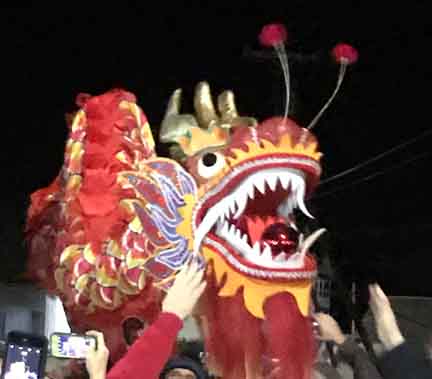 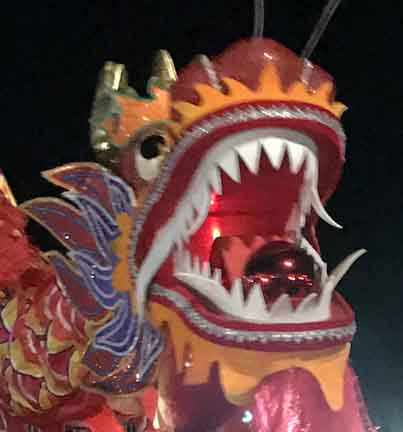 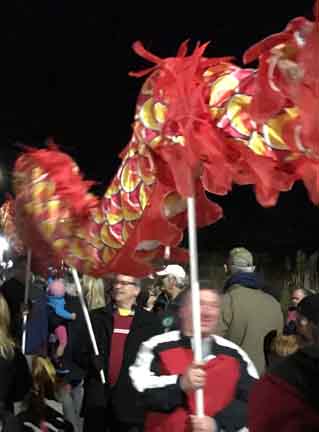 Note the poles supporting the tail

After the 8PM event, Diann and I visited three restaurants to sample beverages- and to keep warm until the 11:30 event.   Just before 11:30 we went to The Bean for hot decaf coffee and a snack.   The warmth of my refill was much appreciated as I stood on the deck and by doing so reserved the most advantageous spot for viewing the running of the dragons.    For drink beverage info and images, link to Rum & Coke and The Bean 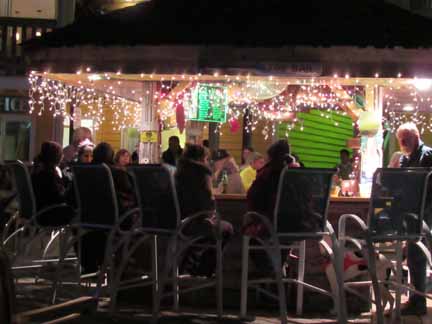 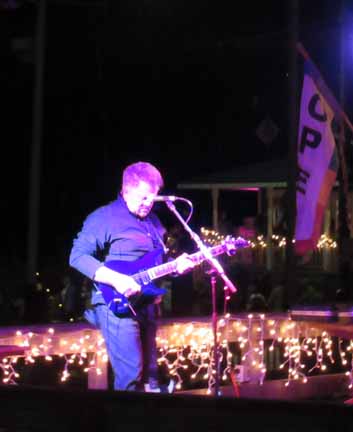 At 11:30PM the second running was done.   The number of viewers fell dramatically.  Perhaps 25% of the earlier number was then in attendance.   The best viewing spot is the north west corner of the deck at The Bean. 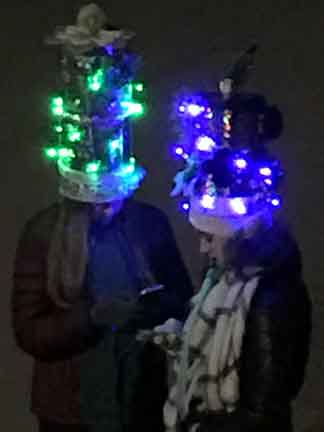 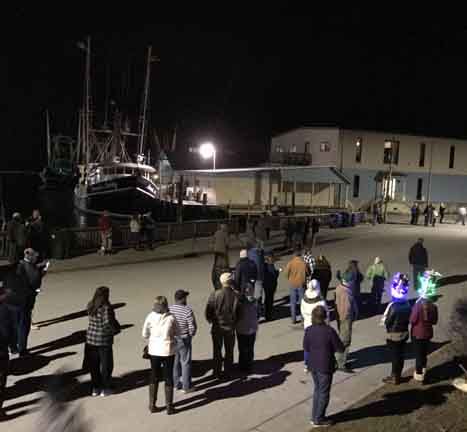 Part of the crowd 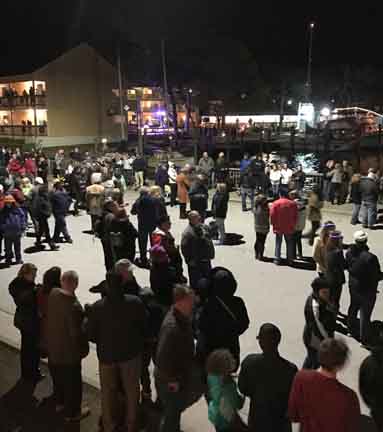 The rest of the crowd 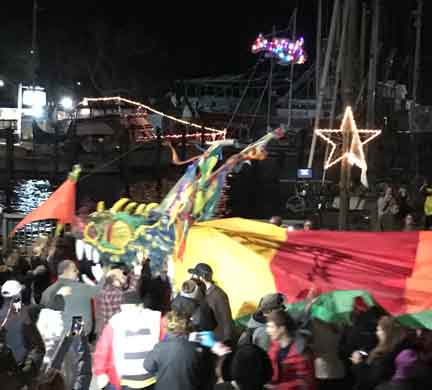 The larger of the two dragons 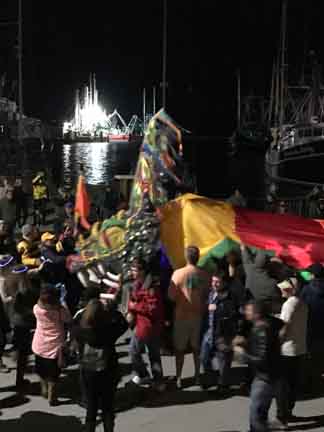 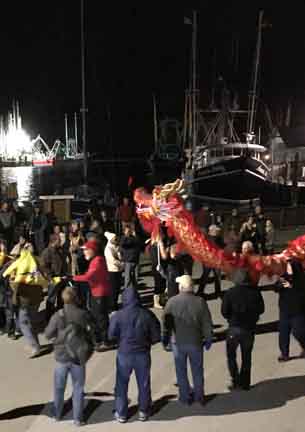 Followed by the smaller one 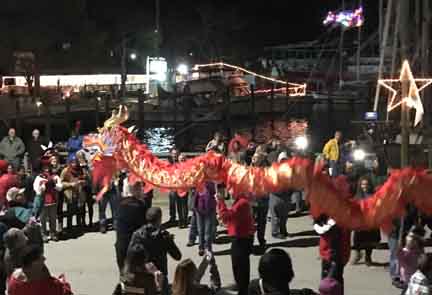 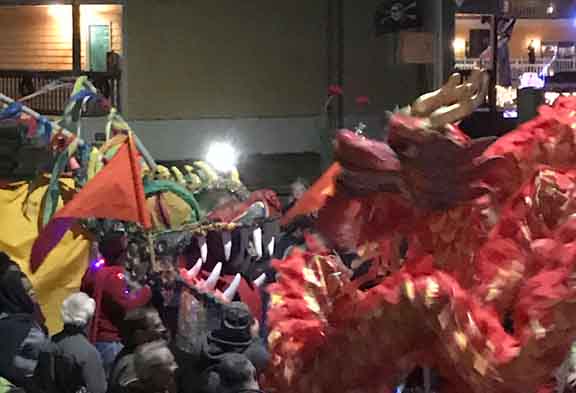 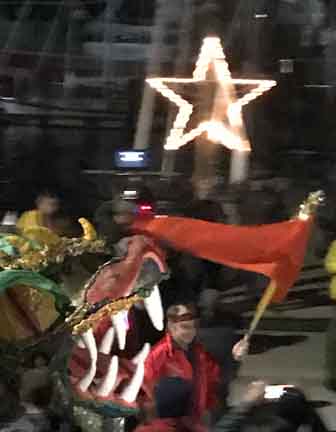 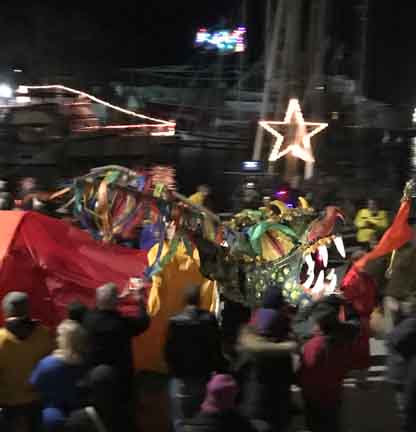 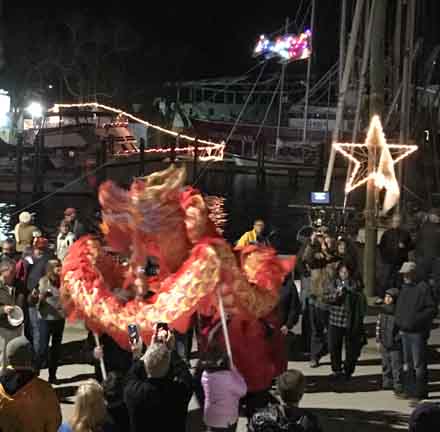 The dragons finished their runs in time for the “dropping of the Croaker”.    A croaker is a type of fish which makes a croaking sound when pulled from the water.  Oriental uses a lighted sculpture to lower for New Years Eve.  And, NO-  it isn’t as spectacular as Key West’s lowering of a live drag queen in a shoe. 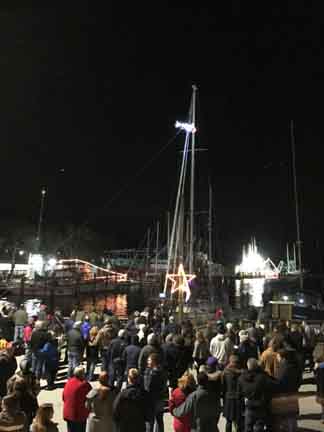 First the Croaker is raised to the upper area of the mast. Swinging against halyards and stays, the Croaker’s ascent isn’t simple. 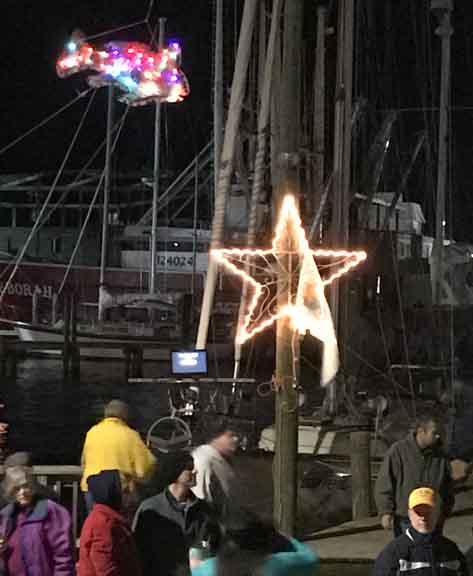 Oriental’s new Years Eve running of the dragons is very much a family friendly local’s event. I’m beyond glad to have attended.  It is truly an event where all attendees can contribute to the experience.

To link to Town Dock.net to see the harbor, click

The story / blog of Yacht A Fun, a Gemini catamaran sailboat, traveling the ICW and east coast with insights to the extended cruising life. New Year’s Eve Oriental