Call me bad !   I didn’t see the name of the band which was playing last night at New Bern’s Brown Pelican bar. If I had seen a placard with their name, I’d certainly have made note.

The Brown Pelican is small enough that even with a small crowd, it feels like an intimate gathering of friends.  For an age of patron perspective-  think a smattering of late 20s; a bulk of forty somethings; and a sizeable hand full of us youthful seniors.

A mainsail from a 28’ sailboat hangs stretched across the ceiling.  Exposed brick emphasizes the room’s heritage.  Craft beer, wine by the glass, and a modest mixed-drink / shot  selection carries the night.  It’s a Membership bar- so food is not available except for a maintenance feeding hot dog.  There’s the main room; a couple of back of bar pedestal tables (my choice due to minimizing loudness); and an outdoor patio for smokers.

What started out to be my music accompaniment of a Rusty Nail ended up being just a scotch on the rocks.  The waitress mistakenly told me she had Drambuie for the ‘rusty part of the nail’.  But, what the hey- why end a good day/evening by being bitchy?  So I accepted what had been poured and perhaps saved her the cost of the mistake. 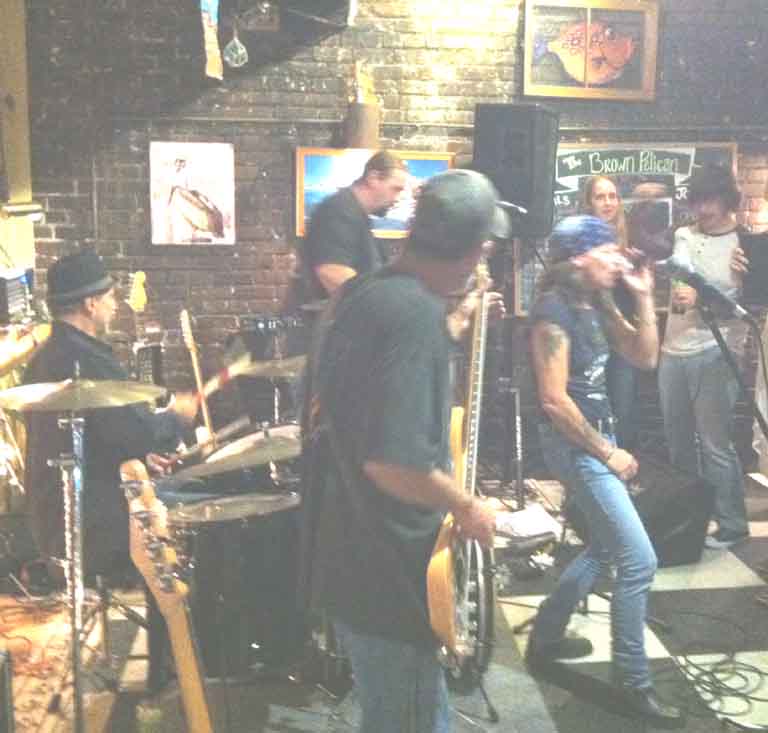 Last night the four person band was very good.  And made all the better since they didn’t try to enhance the music by ramming up the amplifier volume.  The female vocalist did an outstanding run of Janis Joplin’s  “Me & Bobby McGee”.

I stayed for almost two hours, but left after hearing Mustang Sally.  Had I seen a tip jar on my way out, I’d have dropped in a thank you.  Though I looked for one, it didn’t present itself.

As the Pelican’s front doorway retreated behind me on Broad street, I could still hear music as I turned back onto Middle Street- headed for Yacht A Fun.

The story / blog of Yacht A Fun, a Gemini catamaran sailboat, traveling the ICW and east coast with insights to the extended cruising life. “Brown Pelican Bar”