Steel life lines rust. Especially when coated in plastic. The white plastic looks great when new. But as the sun degrades the plastic, it cracks. Rain and salt water get into the cracks. Rust results since the stainless cable doesn’t get proper oxygen. The rust highlights all the cracks in the plastic.

Yachtafun, our 1997 Gemini sailing catamaran, had functional plastic coated metal cable lifelines which were original equipment. All the cracked plastic showed rust. Eventually the cables would not be trustworthy.

The cost of custom replacement lifelines on catamarans runs into the multi hundreds. The cost is impacted by the need to swage new wire into new parts. Existing Pelican hooks can usually be reused- but all the other stuff for steel cable lifelines would have to be new. To material costs, add labor at $75, or more, per hour.

The cost of using Snap Shackles to replace the typical Pelican Hooks is minor. We acquired our Snap Shackles at the Miami Boat Show for a song. The Snap Shackles require a bit more care, than Pelican Hooks, to be sure they are closed. Arguably the rope lines don’t tighten up as much with Snap Shackles as wire pulled by Pelican Hooks. So far, however, we have been very pleased with the replacement lifelines we have done.

The trick to using AmSteel ( or other brands of 12-braid cord) is in doing the eye splice. The process, however, is truly simple. 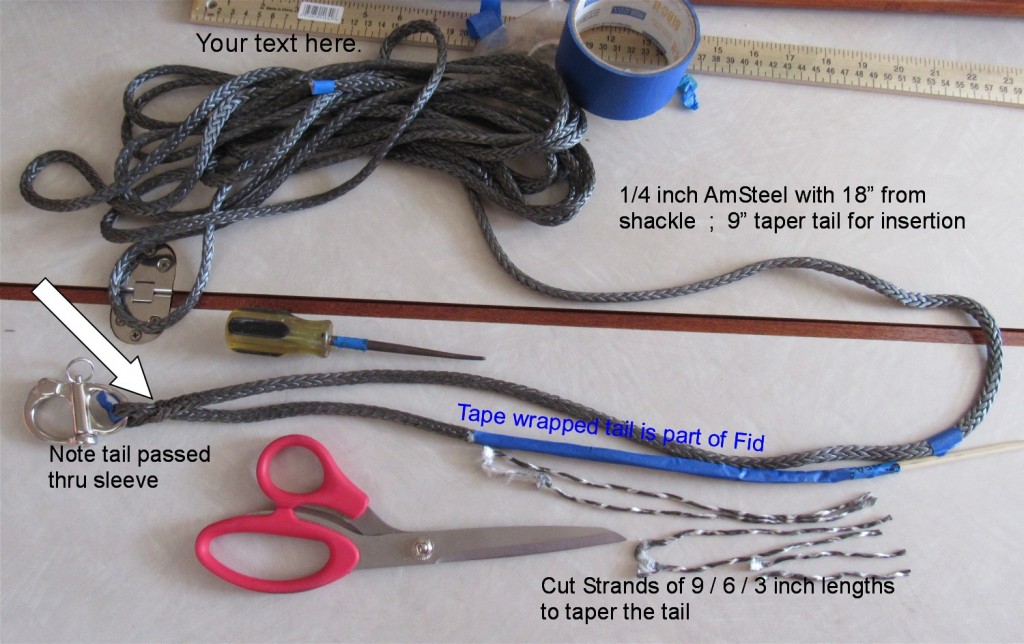 Getting started with eye splice 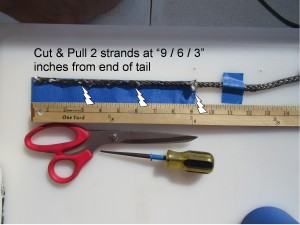 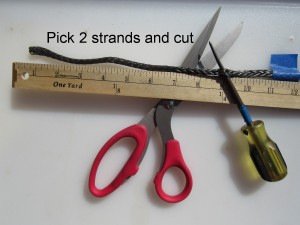 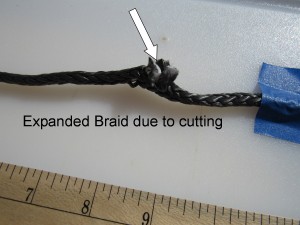 Pull the strands as you cut them

Lay the 18” tail beside what will become the outer cover. Mark along the cover at a point which is about 4 inches from the end of the fid. (The fid will exit the cover at that point.)

When attaching the shackle, you’ll first need to put it into the arc of the eye. Then perpendicularly pass the fid through the cover- which creates a lock. You can pass back thru again for a double lock- which we did not do.

About six strands (or the diameter of the cord) from the lock, insert the fid into the center of the cover. As you push the cover toward the fid, strands open and allow the fid to move through. Once the fid reaches the exit point, pull the fid and the tape-covered taper all the way out.

Strip the tape toward the tail tip to remove the tape in one piece.

As you work the cover down, from the eye loop, the tail will disappear into the cover. “Milk the cover” away from the eye to work it tighter. You’ll need to stitch the eye loop end of the cover so that it doesn’t open when un-tensioned. Recently I used shrink tube, instead of stitching, as a test of securing the splice.

AmSteel does not melt. Heat guns don’t harm the cord when shrink wrap tubes are used.

Shrink tube, or other chafe protection, is a must for the cord sections as they pass thru the supporting stanchions. Twelve Braid cord is wonderful- but it will chafe and/or cut. Without chafe protection, the cord could be cut by the edges of stanchion holes- just when the lifeline cord is needed most.

The Snap Shackle ends make your “gate”. You can pull the cord back to the first stanchion and simply tie it off. Try that to store a wire cable life line when not needed!

To complete the life line upgrade, snap the Snap Shackle to the gate end of the run. Thread the cord through the stanchion holes- after making provision for chafe protection. Then create an eye the same way as before- but without attaching it to the end point. Use small cord to complete the attachment so that the safety line can be tensioned as needed.

This image is of the second gate on the same life line cord. Note the tensioning cord connection.

Rope Incorporated, in Ft. Lauderdale is a good source for AmSteel. They have a web page with links dedicated to splicing techniques.

Other links which may be of interest are: