My goodness, it has been a while since I last did a post. Unfortunately a tornado did substantial damage to a Hickory NC rental property on Oct 23rd. Dealing wilth all the issues has certainly taken my mind off blogging about boating.

Yacht A Fun, our Gemini catamaran has fortunately been running well since pulling and reinstalling the Westerbeke 30B back in the late summer.

Cold weather came to New Bern about ten days ago. Diann and I needed to head over to pump out our holding tank- but the engine wouldn’t fire up. It would turn over, but not fire.

The bar connects the three glow plugs to one wire terminal.

It had to be that the cylinders weren’t heating well enough to cause the diesel to fire under compression.

Knowing that the glow plugs might be affected by corrosion on the electrical lead, I pulled the tie-bar. The above image shows that indeed there was corrosion. 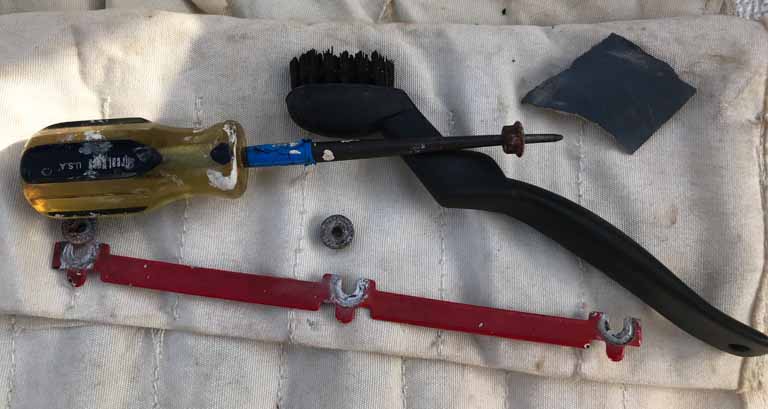 By using a brush and fine sandpaper, the corrosion was removed. Dielectric grease was applied during reassembly. The grease should slow future corrosion.

In addition to the glow plug maintenance, I purchased a $12 heating pad- as in sore back medical use. The heating pad fit under the oil pan with little clearance so the heat could rise directly to the underside. Though I think the bridge deck absorbed much of the heat, some went into the oil pan. (Next time, I’ll put the heating pad on top of the engine and insulate it with a towel. That may be as effective without bilge related grime.)

The engine fired on first try! Was it my efforts, or just that the day was warmer than before?? The next really cold day when heading to pump out will be telling.

The story / blog of Yacht A Fun, a Gemini catamaran sailboat, traveling the ICW and east coast with insights to the extended cruising life. Glow plug corrosion