After the high-tech (everything is relative) Gemini catamaran steering cable replacement event we were ready to continue to Southport NC. Though we had originally planned to go offshore thru the inlet at St. Augustine, we felt it prudent to have a shakedown cruise on the protected ICW before again venturing offshore.

Currents run strong at the intersection of the ICW and the inlet. We timed our exit to coincide with the opening schedule of the Bridge of Lions and with tidal flow. Though its reputation caused apprehension, the confined ICW channel, at the inlet, was well marked and depths good. 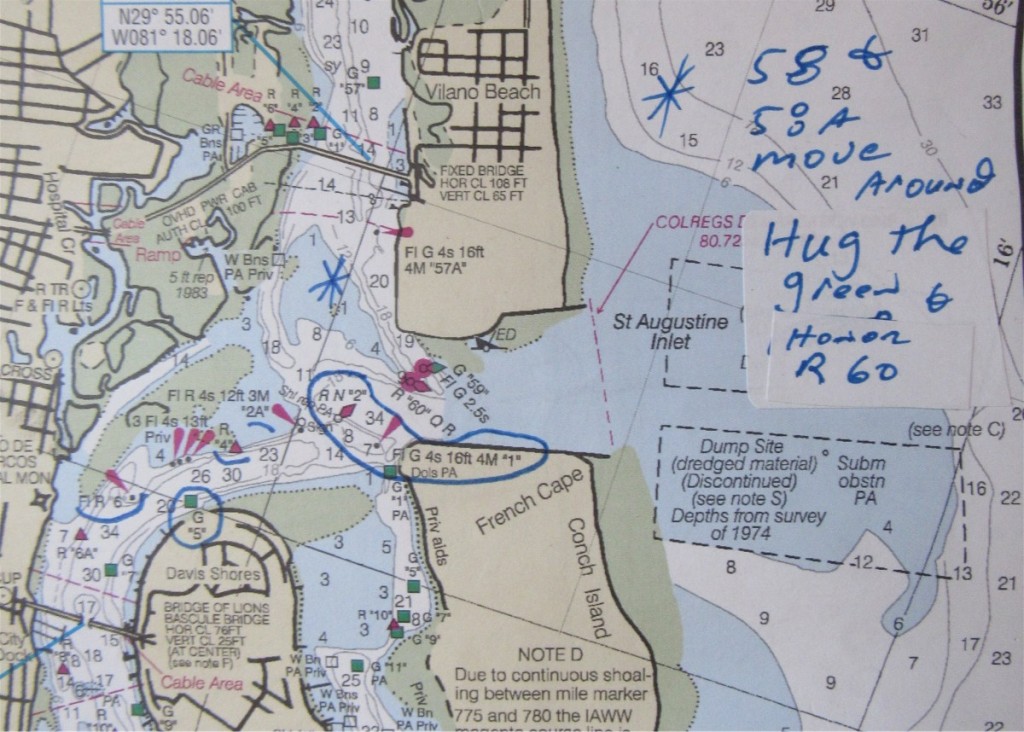 The smoothness of the steering system’s operation became reassuring as we headed to Mayport, outside of Jacksonville.

That evening we tied our catamaran up at the Morningstar Marina- with its strong current of the St. John’s River. 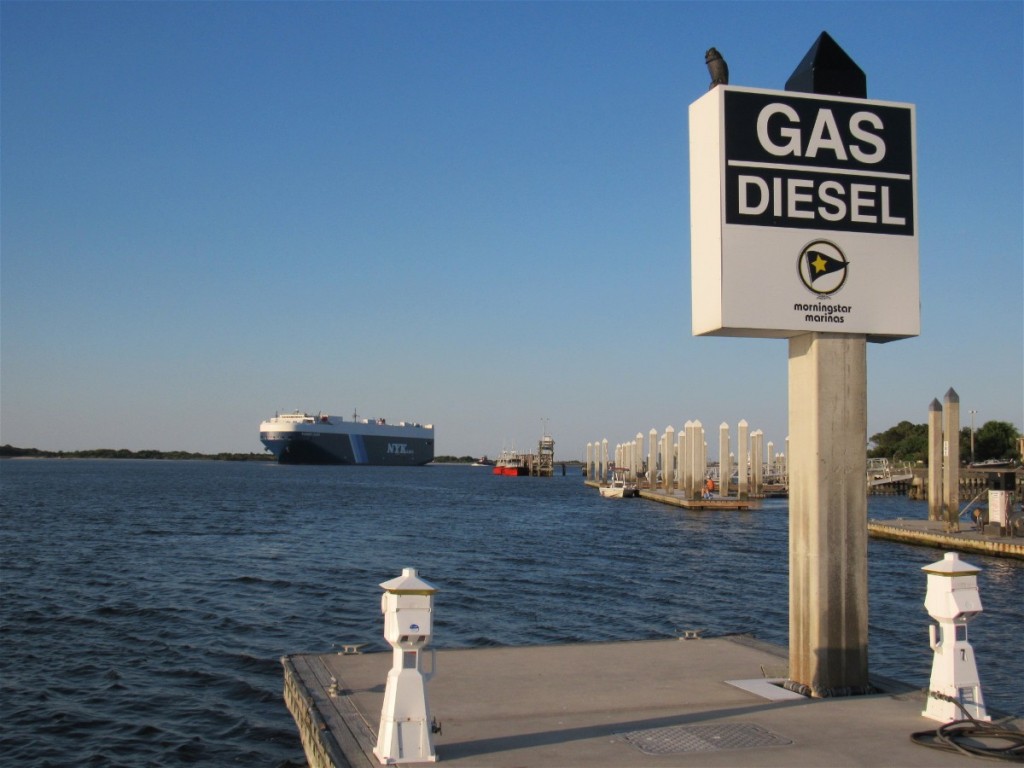 View from dock at Morningstar / Mayport

Navy helicopters made broad circles as they practiced what we assumed were touch and go landings. 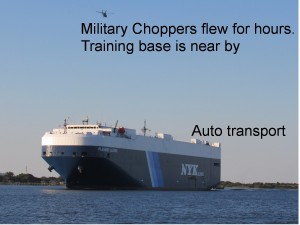 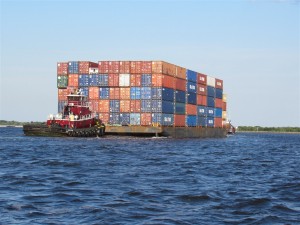 Auto transport and cargo vessels were active all night long! The sloshing wakes bounced Yachtafun as they went by. Thank goodness the dock system is a floating one.

Onward, the following morning, with a minimal current we returned to the ICW and occasionally endured inconsideration from power boaters. I tried to photo this fellow’s boat-name, but could not because of his stern wave and the action to our boat. Items fell off our shelves from the rocking which resulted as he came so close. I looked for his boat at Fernandina but he was not at the municipal docks. 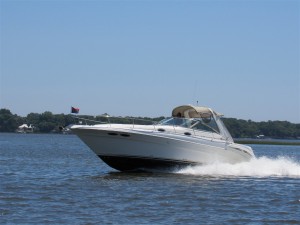 If only I could have met this jerk in person

Keeping to the “magenta line” (charted ICW channel) was important as shallows were evident where one might assume deep water would have been. 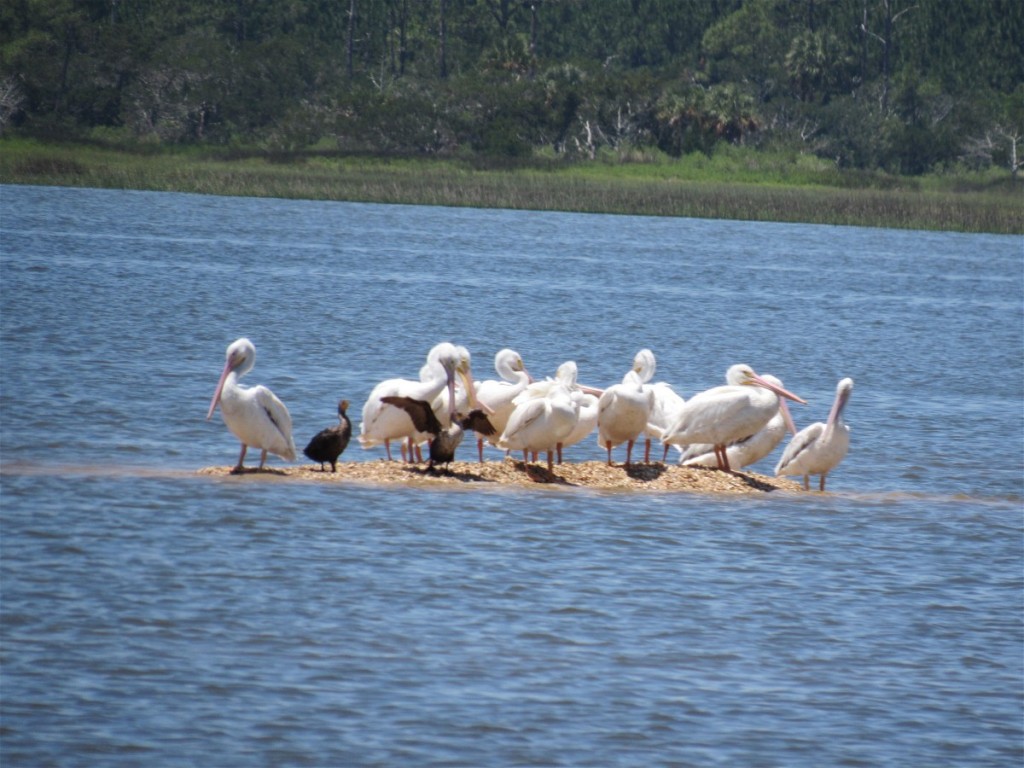 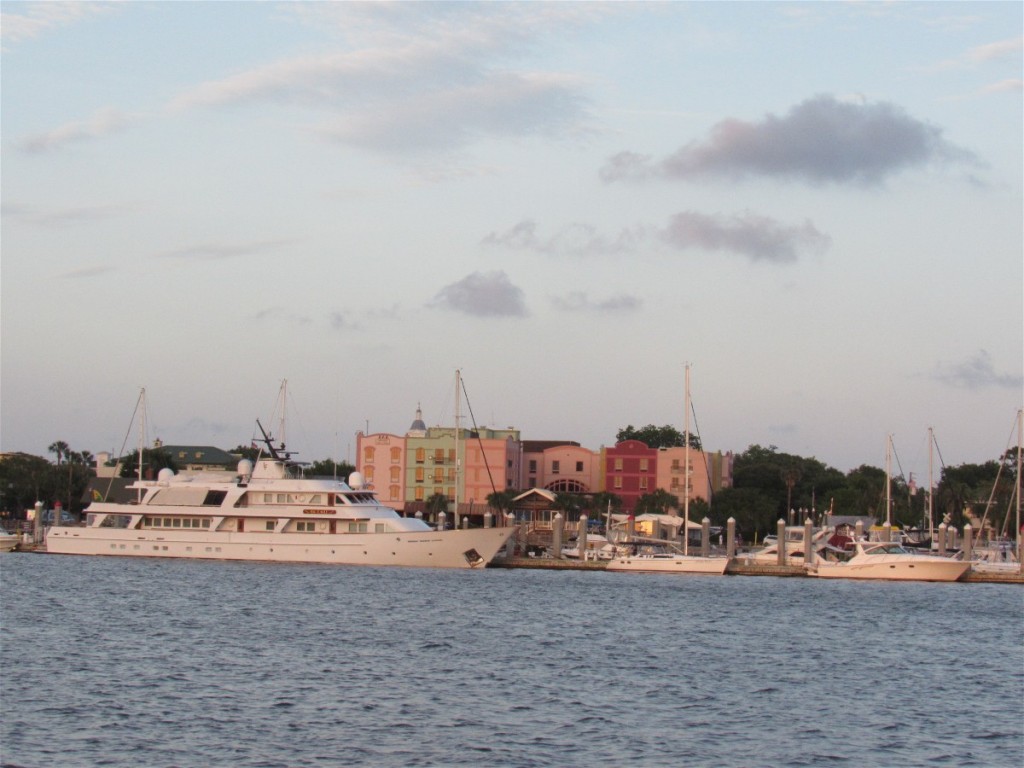 A research vessel was positioned within the mooring field area. We did not learn what it was studying. 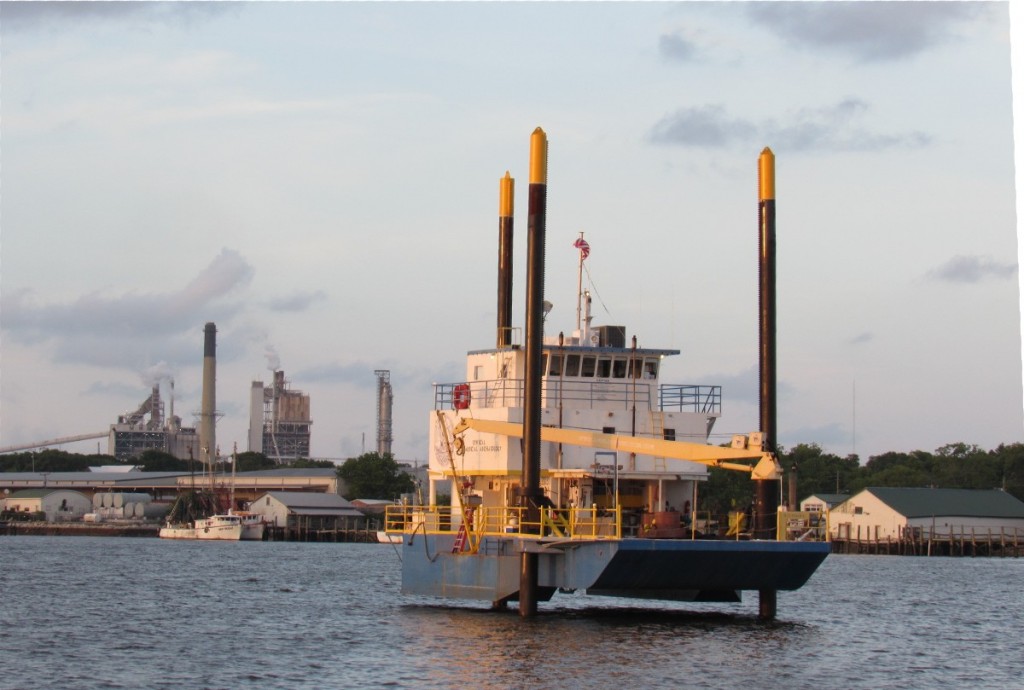 Wind was high, so we did a lay-day and enjoyed the town and its shower cabanas. Diann proclaimed Fernandina Beach tops for shower facilities we have experienced. 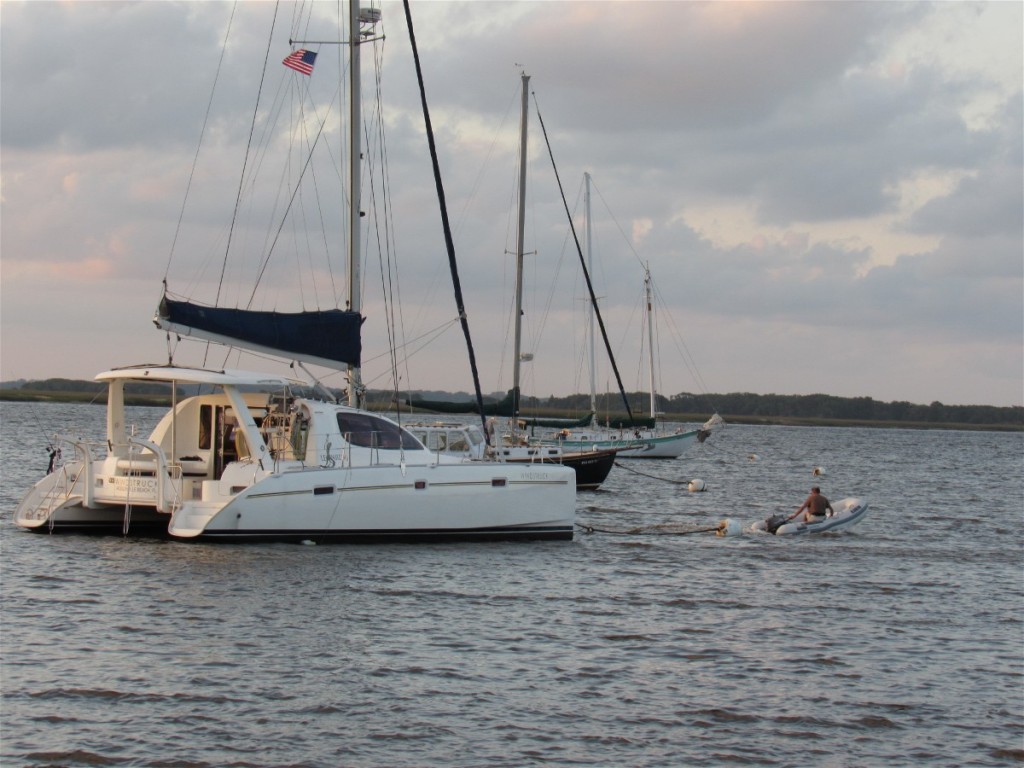 The fresh seafood market (next door to the shower facility) provided crab, butter, beer, and shrimp for our second night’s dinner. 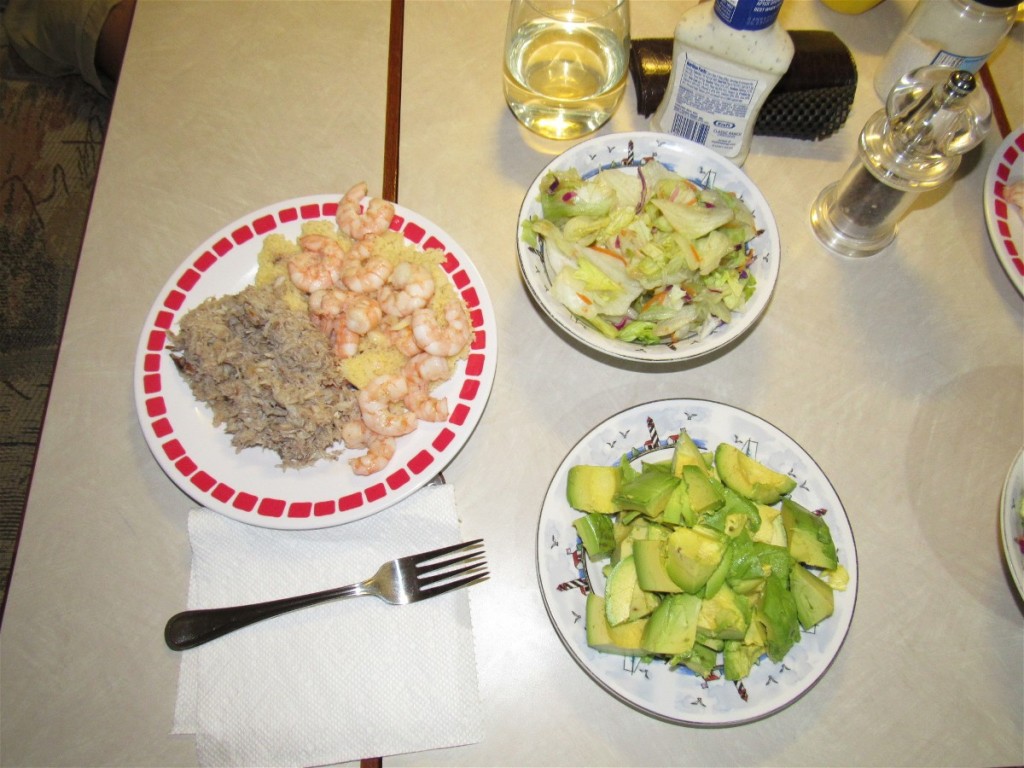 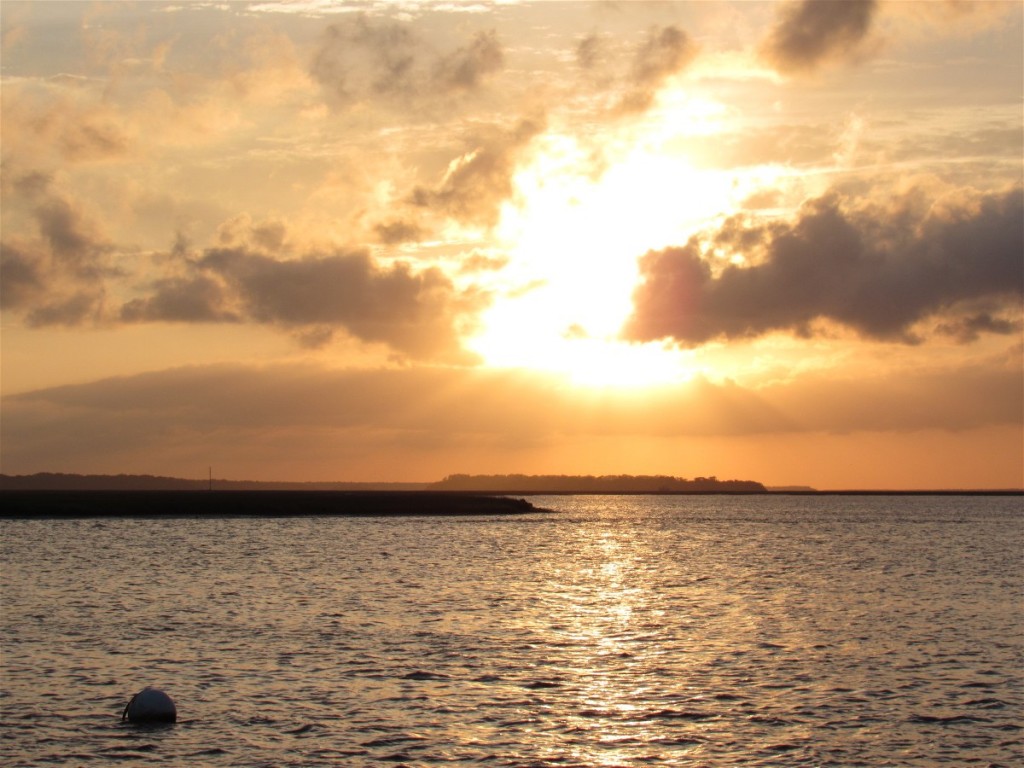 On the morning of our departure, I made crab and eggs for breakfast. 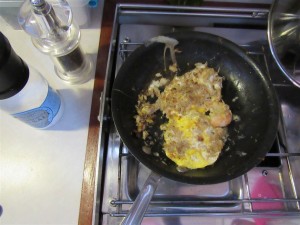 Crab and Eggs with one shrimp

After topping our fuel we headed out the inlet. Diann steered between channel markers, which meant into swells and east wind for an hour before we reached deep water and sufficient distance from Cumberland Island’s shore. 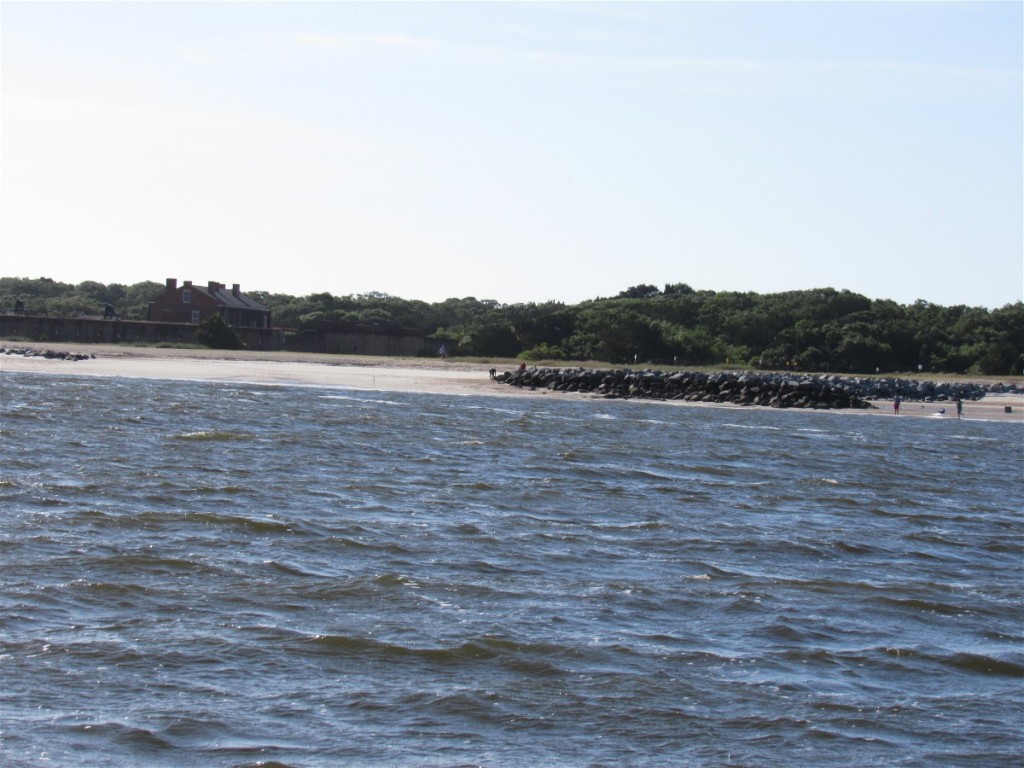 The inlet begins near Fort Clinch 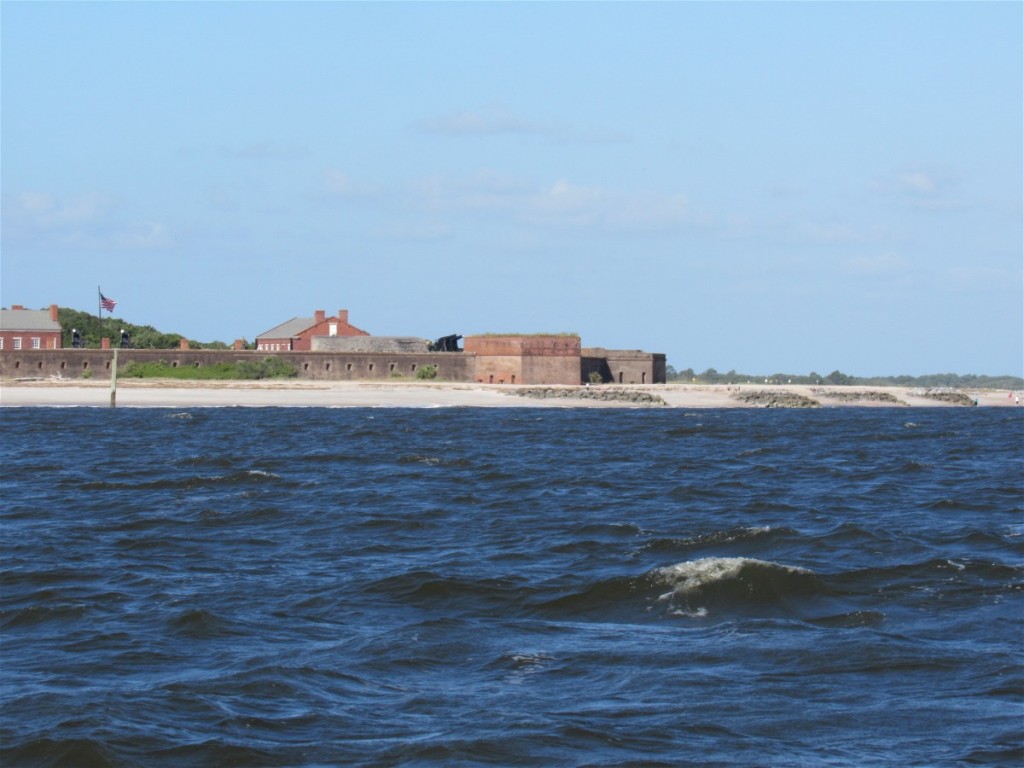 We were expecting to sail on 3 to 5 foot seas. Sailing was not practical, however, as we learned that our Gemini sailing catamaran “points” to 30 degrees in calm bay type waters- but not in rolling off-shore waves. Had the wind been more to the southeast, we would have been in good shape to sail.

But, we were forced to give up sailing and fired the engine. Unfortunately we had lost so much forward motion/distance while trying to adjust the sails so as to parallel shore that we could not make Doboy Sound by nightfall. None of the other close inlets were safe to navigate at night. Thus began our first overnight passage- as it was safer to remain off shore.

When NOAA predicts sea heights, the upper number is the average of the highest 1/3rd of the waves. The forecast was “3 to 5 with occasional sixes” . Well, that also implies an occasional 12 foot swell- which we had. The “period” between crest and trough was predicted at eight seconds, which it seemed to be. The long period was beneficial in that the waves rose up and “slid” under the boat and let it down gently.

Before dark fell, I had rigged our radar reflector up high in our rigging. Apparently the fishing trawlers honored us as they turned from us as we intersected courses that evening. 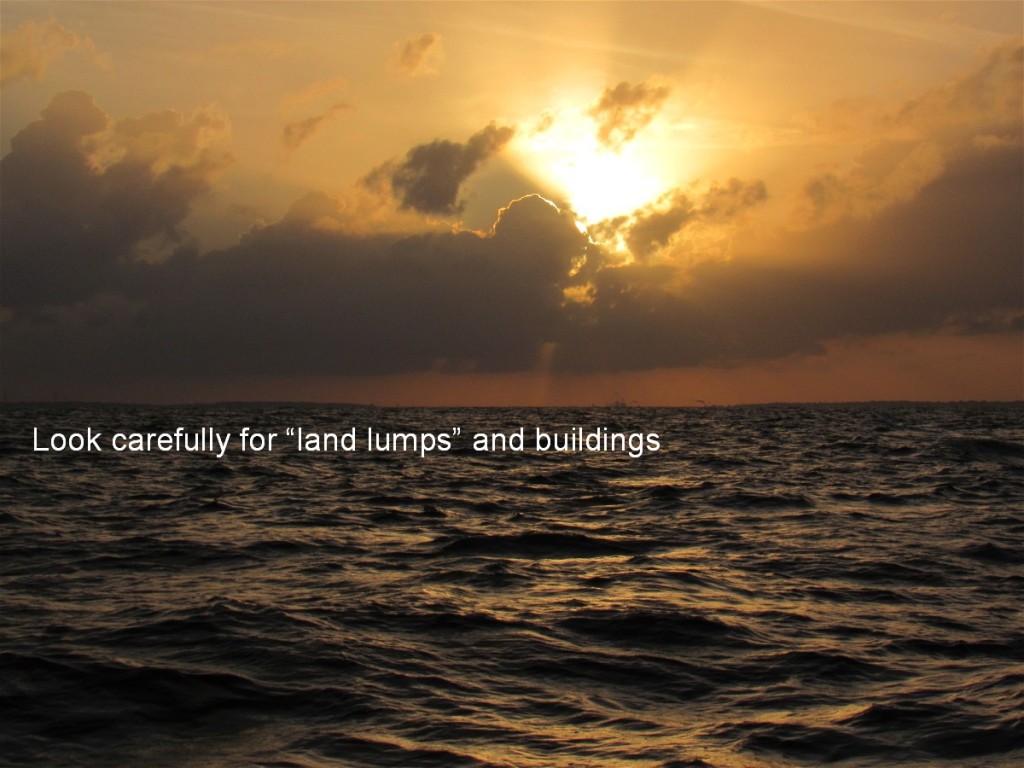 Our first sunset seen from off shore

The half moon, from which we had expected some illumination, was hidden by the “partly cloudy” sky. NOAA missed the calming seas forecast by two more days.

Our red and green running lights cast a glow on the white bridge deck. From the view of the steering station, the green light also highlighted cresting waves as they passed by on the starboard side. Occasionally one of the wave tops would slap onto the starboard hull and explode into spray. At Midnight I took my turn to sleep for four hours.

At 4 AM, it was my steering time. Soon I had to put on foul weather gear to keep dry as the slapping wave crests splattered small bits of water.

It was an eerie feeling to motor and steer by compass, with no visibility beyond the red and green glow around the boat. Diann remained awake all night and kept check on the iNavX chart on her iPad. We made sure we were five or so miles off shore.

The sun revealed itself as a dim glow on the eastern horizon. It took well over a half hour before what one typically considers “day break” to occur. We were relieved to again have light by which to see our surroundings.

Our destination became the inlet at Tybee Island, the entrance to Savannah and to Calibogue Sound at Hilton Head Island. Once near Calibogue I decided to contact Harbor Town Marina at Hilton Head. What a wonderful decision.

If we had ventured to Savannah we would have had an additional 3 hours of up river slow motoring- and then have those same 3 hours to return to the ICW the following day. By heading to Harbor Town we gained a lot. 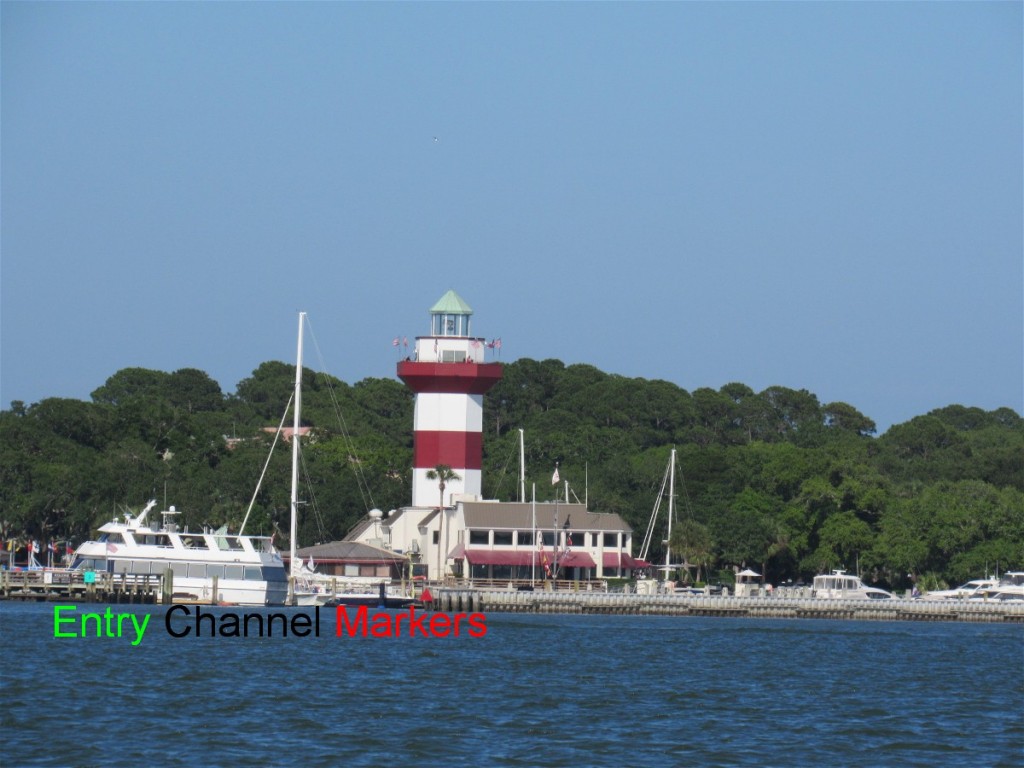 First off, the $2.50 per foot slip fee was less than in Savannah. Laundry is included in the rate, a bottle of wine is delivered to your boat with your sign-in documents, 10% off cards are provided for use all over the island, and if you are staying for more than one night you have use of the free trolley system to tour and use the Sea Pines Resort.

The experience begins as a dock hand, on a service boat, greets you at the harbor entrance and guides you to your slip. Once he has assisted in tying your dock lines, he returns with your guest package. The materials are informative and as first class a welcoming as one could desire. 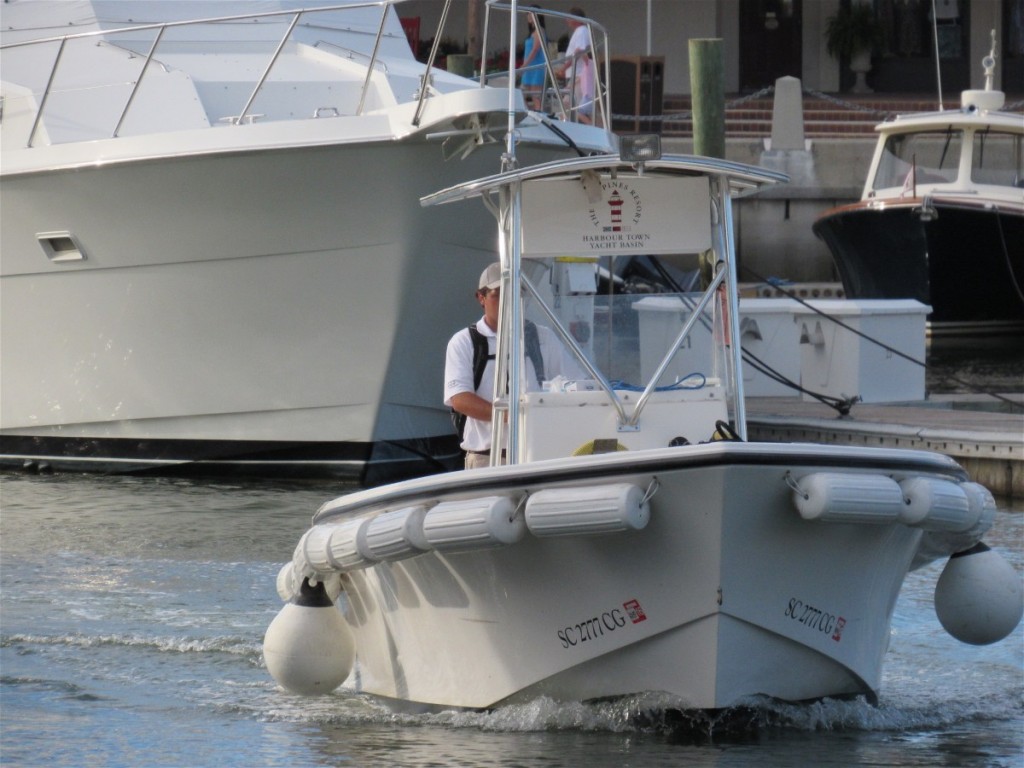 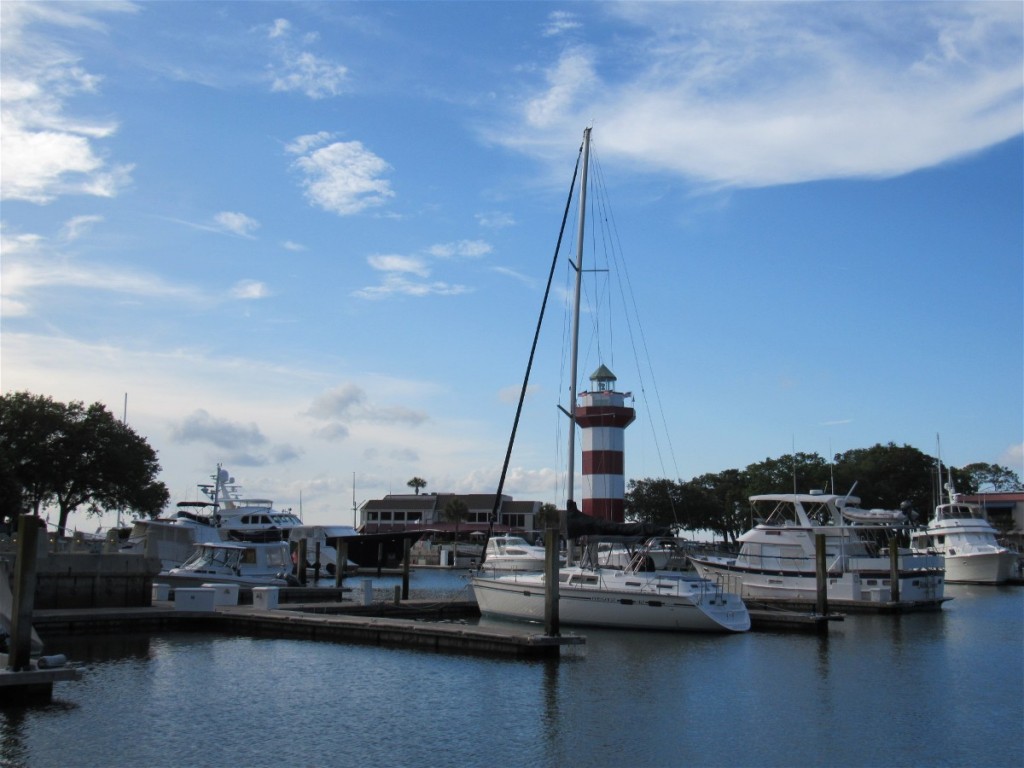 View from our slip 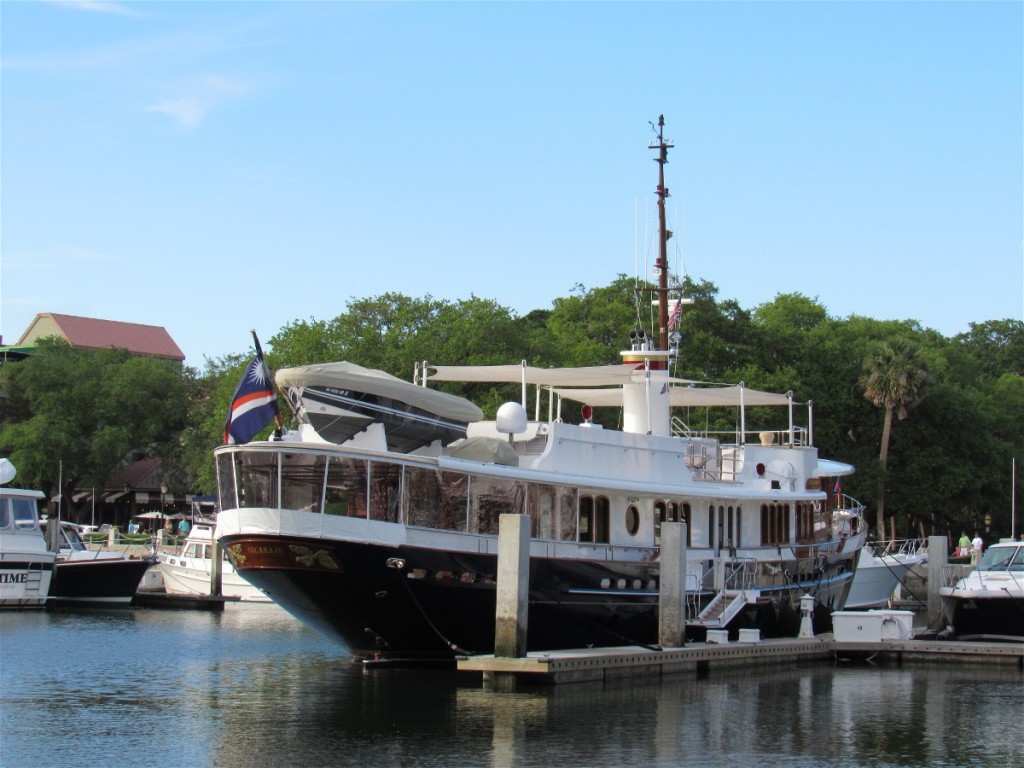 A large variety of dining options are available along the harbor’s area adjoining the famed red and white striped lighthouse. We chose to have burgers and fries. We had failed, in Fernandina Beach, to quench our hunger for burgers. It was a treat, without spending much money.

Our next day would be a short one and so we began it by doing laundry before pumping out our holding tank and topping off fuel at 1PM.