I awoke at 5:30AM and worked with computer files and emails as our power cord would be cut when we left out this morning. My 2007 Toshiba laptop continues to be a wide-screen workhorse but I haven’t replaced the internal battery- making a/c a necessity.

Last minute double checks of the boat, lines, and systems made us ready.

OOOOPs I forgot to check the boarding ladder which had been dropped to make access for my feet when tying down the dinghy on the starboard side. As a result, the steerage when we departed was stopped by the rudder impacting the boarding ladder. Fortunately I understood, and used, bursts of forward and reverse to make YAF turn.

Once I calmed down and looked aft, I saw and corrected that problem. let’s call it a learning curve!

Then the wind died and we decided motoring would get us to our anchorage before expected thunderstorms hit.

The boat motored fine.  We enjoyed seeing the ferries as we were near Oriental.

Using paper charts and an iPad chart system we made South River by early afternoon.

Only one communication glitch on anchor signals and we were set in grey mud (learned the color Tuesday morning).

Then we got to watch the shenanigans of another boater who made multiple attempts at anchoring nearby. The accompanying photo also has a distant fellow-anchorer in the image. 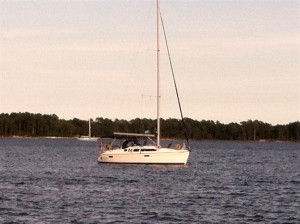 Two other boats anchored in South River near Oriental

Diann and I relaxed and positioned our Catalina grill onto a work board and grill/cooked black eyed peas and shrimp with Old Bay and olive oil. A good dinner- improvised in the cooking.

It was hot. Really hot. Diann began her night’s sleep on saloon cushions moved to the cockpit seating.

We both got up rested thought.