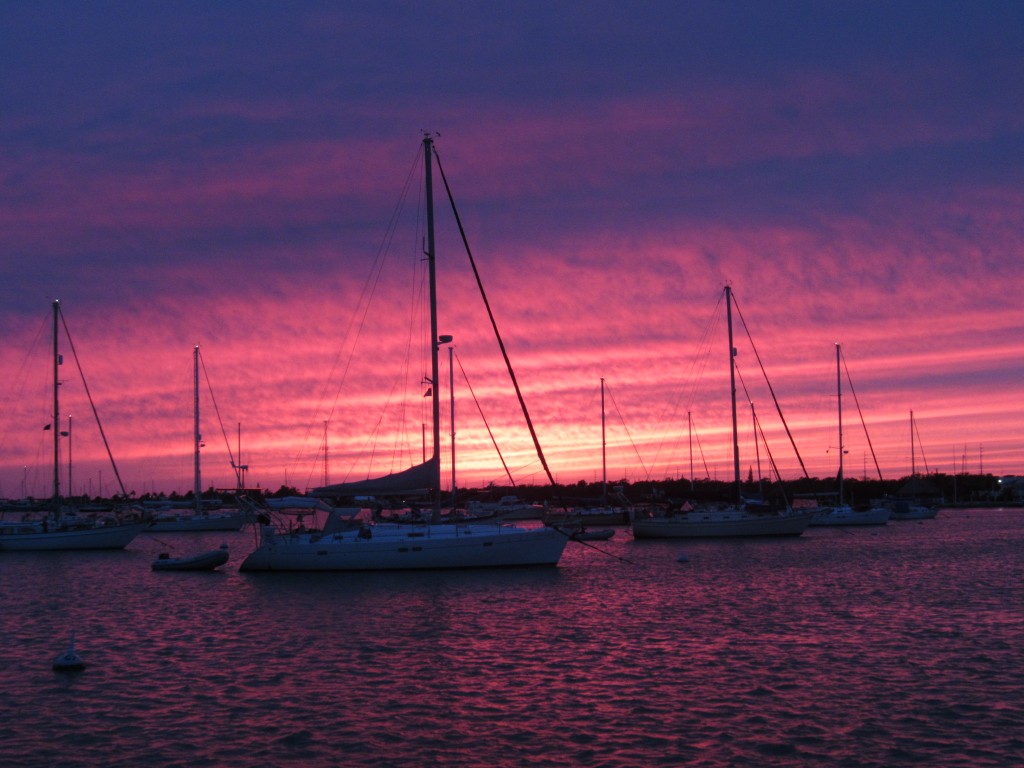 My blogging has had a bit of “interuptus” of late. That’s in part due to research visits to local attractions and writing advertorials for the Hickory NC paper and due to boat work performed and getting a bad cold and also having a touch of what’s fondly called Key’s Disease (when you just get lazy and a bit irresponsible).

A week, or so, back- I spent the better part of two days scrubbing the scum and stains from our Gemini catamaran’s two hulls above the waterline. Wavelets carry oils, dirt, plant life, and a host of other things which add up as they contact, and adhere to, the boat.

A coarse scrubby pad works wonders on the stain / growth. The trick is in having a line, run from bow to stern, which provides a means for the person to remain fixed at the work station. Without that line- wind, currents, and boat motion, work to make scrubbing all but impossible. With a little practice the line can also act as a means of leveraging one’s body against the hand holding the scrubby- thus adding pounds per square inch to the scrubby’s action. On a catamaran, one has four trips down the length of the boat.

Once the above-waterline work was done, it was time to scrape barnacles from the below waterline part. The line, for the below water task, was run port to starboard and attached to opposing stanchions. The result set a stripe pattern / grid for cleaning consistency; and provided the aforementioned positioning stability and leverage points.

The amount of growth found was phenomenal.

The entire bottom had been pressure washed and cleaned before we left in November of 2014. Two months ago the hull had been “side scraped” in Coconut Grove. Now in slightly warmer water in Boot Key the sides were covered more densely that what had been removed in Coconut Grove. The bottom was almost covered with nickel sized barnacles, which scraped off in sheets.

As I began the underwater work I noted that fish were congregating below my work area. What were those fish eating?

When I came up for lunch I found that my suit was covered with tiny shrimplike creatures. I smelled like a fish market! A Google search leads me to think that many of the creatures were barnacle larvae.

Cleaning the boat hull on multiple days set the stage for my following cold. About two days after the bottom cleaning, I began to get a sore throat. The throat soreness was followed with sneezing and tiredness. By last Saturday I was so whacked that I simply stayed in bed for 38 hours straight ( except for food and potty breaks).

Was there a connection between cleaning the boat and getting the cold? Or, did I get the cold germ from other visitors at one of the areas we visited? I’ll probably never know. And that too, is part of cruising……………..