About three months ago, the women living at New Bern Grand Marina (and some who now are living off their boats) decided to gather on Thursday mornings for breakfast. Their conversations stay fresh by being open and range from boating topics to family ones. Each Thursday the attendees sit next to someone other than during the previous week. The breakfasts have become special to Diann and have broadened her friendships to include folks from all the docks.

About three weeks ago, men at the marina decided that if their significant others were having breakfast off the boat- then it must be a good idea.

Today, I attended the men’s breakfast, which is enjoyed at Baker’s Kitchen on Middle Street here in New Bern, NC. My order was the Farmer’s Breakfast of pancakes, bacon, eggs, grits, and coffee. One of the pancakes made it back to Yacht A Fun and was desert during lunch on board. 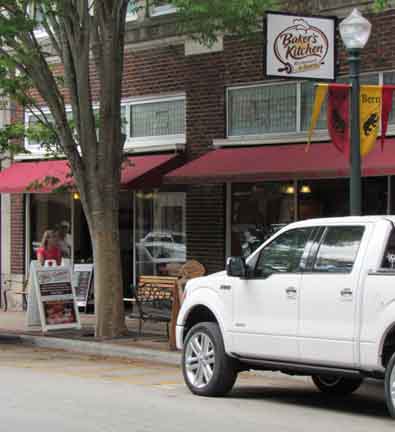 Breakfast and Lunch only.
A short walk from the marina.

This kind of socialization has not been typical at other marinas at which Diann and I have stayed. I’ve made a point to get to know as many folks as possible when at the various locations we’ve stayed for periods longer than transient days- and I’ve not heard of such regular gatherings previously.

Perhaps the catalyst for the formation of the New Bern breakfast gatherings is that many of the people involved have either been long term residents of the marina, or have had extended stays during “snow-bird” cycles on the ICW.

New Bern is only 22 or so miles up the Neuse River from Adam’s Creek / ICW route. It’s a great place to base. As a result it has caused more than a couple of boaters to acquire downtown residences as they gave up their full time live aboard life style. As an east coast cruiser, I recommend you pass thru New Bern to see if it might be a good place when you decide to swallow your anchor!

The story / blog of Yacht A Fun, a Gemini catamaran sailboat, traveling the ICW and east coast with insights to the extended cruising life. Baker’s Kitchen Breakfast Meetings