Our Gemini catamaran has the Westerbeke engine with “JS” transmission. There’d been a bit of oil in the bilge mixed with pink Rotella antifreeze. The antifreeze ooze source was discovered last fall by using a pump with gauge so it could safely be pressurized. Solving the antifreeze leak was a matter of tightening a hose clamp.

Confirming the transmission oil leak was a bit more involved.

Mechanic number one showed up late for his appointment; didn’t call to say he would be late; and came without the dye kit his shop foreman had indicated would be how the issue would be reviewed. It took Mr. Mechanic forty five minutes to go and come back from his shop. I timed it myself- the commute is only ten minutes each way. 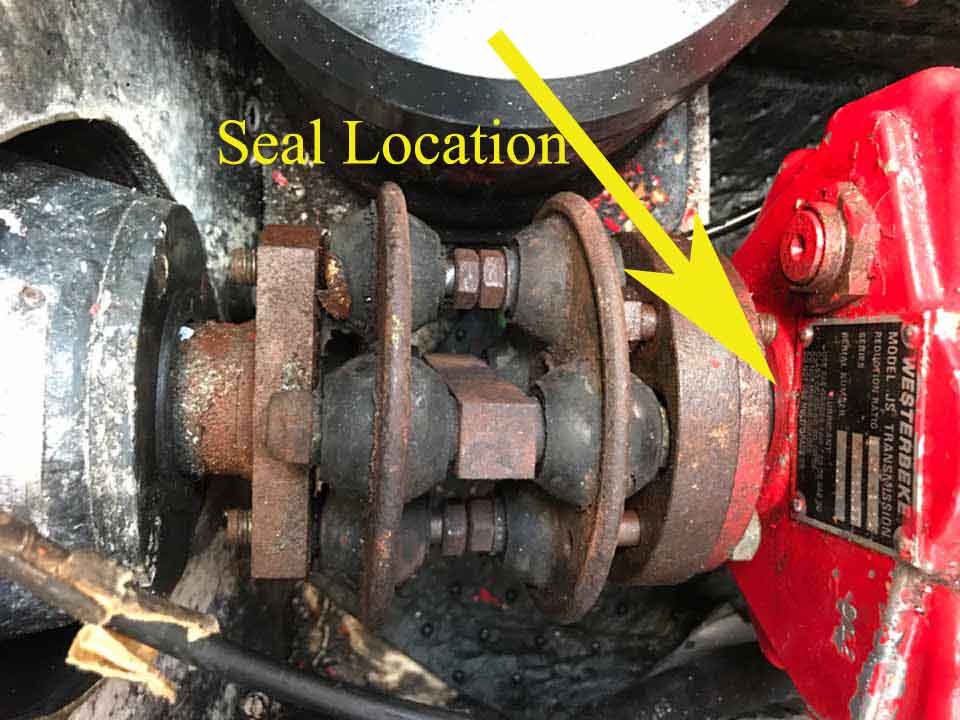 After adding the dye and running the engine under load against the dock lines, the black light showed the leak to be at the rear seal.

However, a follow-up call from the shop foreman indicated that they don’t service transmissions in house and that the engine / transmission would have to be removed- and the transmission sent elsewhere for service.

SO, I contacted Engine’s One out of Portsmouth VA and was reminded by them that they have a sister service shop at Jarrett Bay industrial boat yard.

Yeah! I was happy to locate an alternative in which I have confidence.

But, the sequence goes on! After a hour’s charge at $110 and hour, Mechanic Two indicated he could remove the coupling and once done could replace the rear seal without removing the engine. That sounded good, though I knew it would be a tight body-fit and the effort would be slow.

On the day for his scheduled second visit he spent two hours of looking and wrench work and ultimately discovered that the coupling system does not simply span between the transmission and engine. There is no “slip room”, nor do the coupling components separate in place.

Note there is no room to remove bolts

We decided to remove the drive leg and swing it by a pulley. The idea seemed good.
HOWEVER:
The lower right bolt was blocked by the zinc and by the hydraulic ram that raises the leg;
The middle left bolt was blocked by the reverse lock assembly;
After removal of conflicting parts and the six bolts we discovered that the manufacturer had applied 5200 to the base and so the drive leg mechanism could not be removed without extensive labor. 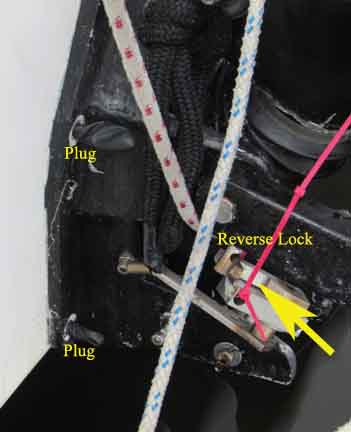 For two days, the drive leg remained attached to the transom by 5200 alone. Safety ropes were attached but without tension.

The game plan was set that I would soften and remove the 5200 sealant on Wednesday and the mechanic would return on Thursday. It was not to be.

That night I got a stomach virus which prevented me from starting the 5200 removal process the following day . As it has turned out, getting sick allowed me time to reflect on the big picture.

Just to double check myself, I called England and spoke with Glen Print. Always helpful, Glen confirmed my fears. Breaking the 5200 bond could very well damage the gelcoat and underlying fiberglass. His suggestion- loosen the engine mounts and slide it away by less than a half inch.

Once off the $15 phone call, I felt better. But, I also realized that the engine and drive leg would need “alignment labor” after the transmission seal part of the project is completed.

Now for the great ponder of options…………
#1 retighten the coupling bolts and add stop-leak to the transmission oil and simply minimize the problem.;

#2 do the engine slip technique and hope the seal can be replaced in-situ; or

One aspect of the decision process will be the condition of the engine mounts.

While awaiting the mechanic’s return I have the four open drive leg base bolt holes plugged. The plugs were fashioned by rolled magazine paper, painter’s tape, and fingers cut from a nitrile glove.

The story / blog of Yacht A Fun, a Gemini catamaran sailboat, traveling the ICW and east coast with insights to the extended cruising life. Westerbeke Transmission seal