Yesterday was a good day. We bedded three hatches, and cleaned rain diverter “eyebrows” of the large windows, and cleaned more of the cockpit textured trim. The rain that later came was so intense I don’t know that I’ve heard a more steady flow. Wind blew off the Neuse River at about 2AM and was a driven mist which chilled me to the bone as I took off the flapping tarp sun screen that I should have removed before turning in. Cold, darned cold. I buried myself under the bedspread to regain warmth.

Then, at about 3:30AM there was a constant bang/tapping that needed review. I got up again but put on a rain coat this time and found the lazy jacks (that I had released to make room for sun screen placement) to be tapping on the mast. So, I tied them off with the most available bitter end of some line coming out of the boom. I knew that wasn’t the most professional way to stop the banging, but getting too cold again was not to happen. I’ll undo the tie up later.

Two days ago we managed to lose the holding tank plug overboard.  We went looking for a replacement today.  One would not believe how much West Marine wants for one- $15 or so!  Inland Provisioning had a blue colored water fill plug for $6.95.  The local hardware store offered us a red colored fuel fill plug for $5.  I chose the blue one.  Better to have water mistakenly run into the holding tank than fuel pumped in!  I colored the blue color with a black permanent marker.  Note the blue line where the turn handle fits. 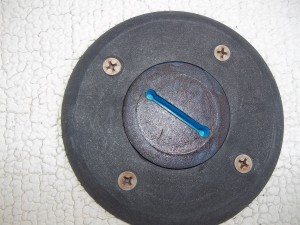 Today was a boost in having Deaton’s staff arrive onboard to check out three of the ‘in-water” components.

First the air conditioner was run, by Steve, and found to need a little Freon. In the scheme of things a minor issue.

Then Eric checked the generator. We learned that it takes the power of both batteries to turn the unit well enough to start. My guess is the owner, who had it installed, skimped on the size wiring. A simple fix- turn the Guest selector to Both Batteries and roll on. BUT, the run solenoid had issues and needs to be replaced. It worked, but only with manual assistance—-NOT. Overall, typical maintenance for an aged unit. 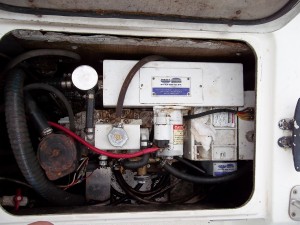 Finally, Eric checked the intermittent electrical issues with the Westebeke tachometer and alternator gauge. That process took the longest to diagnosis. It turned out to be that the blue wire (no kidding the wire is blue) had a break somewhere along its run. Replacement of the wire solved the problem. Lots of labor, little material later and it runs fine. Analysis is the knowing what to look for. I’m still in the low level “red to red, black to black” house wiring general contractor knowledge level. I felt like the understudy to “Capt’n Ron”, but never asked “why is that”. 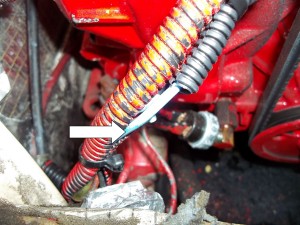 While Eric finished his magic, Diann and I checked out the local marine consignment store for bargains. Hopefully the bronze GROCO shut off valve I bought can be used to replace a worn one that controls water flow to the a/c unit. If not we can return it.

We also brought back a stainless steel L shaped mounting bracket to see if our Catalina grill would mount to it and, it to our rail system. Yes, to the mounting. No, to the stability when the boat encounters rough water. So, back to the consignment store.

After the consignment return, I continued on to the Town and Country grocery for tonight’s stir fry. Cumin, Cilantro, Garlic, Red Pepper- should be good with Avocado, Black Beans, and Kiwi. 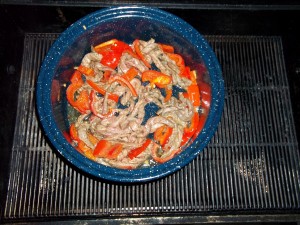 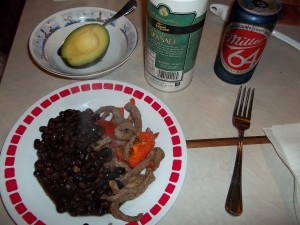 The schedule is on- tomorrow we get hauled.

My first activity after haul out is to remove the existing toilet for the electric, water saving, upgrade version that’s to arrive Thursday. It’s a sh__y job but someone has to enjoy “another fun day”. Meanwhile, Pinot Noir makes a good accompaniment to Pandora and Ziggy Marley.

Zoey on the other hand looks up to say, I’m tired.  And returns to sleep on a clean-laundry bag amongst the clutter of living and working on board. 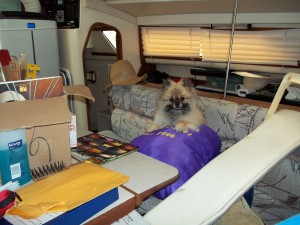 Zoey wakes for a moment