One of the big benefits of cruising in place is being able to experience a location in depth.  Yesterday was a good example of  such a depth of experience.

Diann and I left our Gemini catamaran to walk our Pomeranian, Zoey along the Trent River.  “Have you seen the trawlers”, one of our fellow B dock liveaboards asked. She went on to explain that an assembled  fleet of commercial fishing boats were anchored in the Neuse River in preparation for a public hearing about regulations proposed by a “public interest group” out of Raleigh. 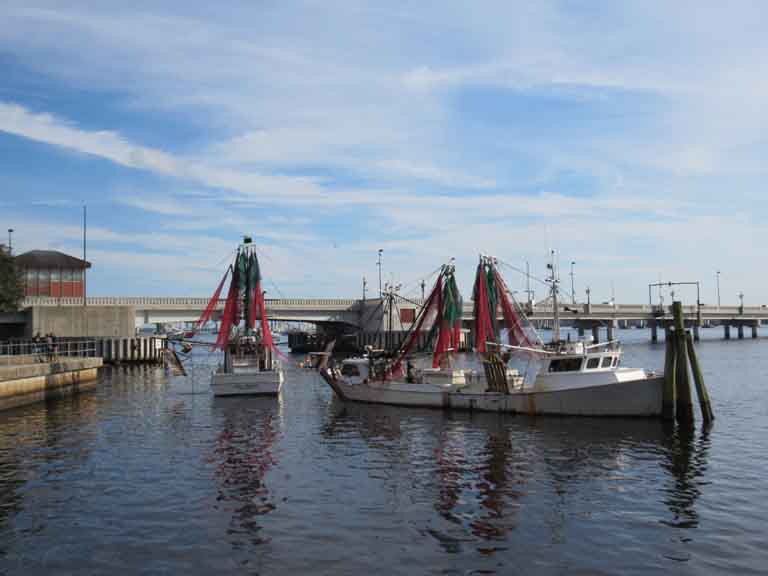 As Diann and I walked toward the Cunningham draw bridge, we began to see what the excitement was about.  Small trawlers had come thru the bridge and were tying up to a set of dolphins (triple pilings) and rafting together bow to stern.  The boats used an anchor from the third boat, to prevent swing movement.

The bridge being a high location from which to take photos, I fast walked away from Zoey and Diann so that I could get images from the upper vantage.  I was awed by the number of anchored vessels on the Neuse River. 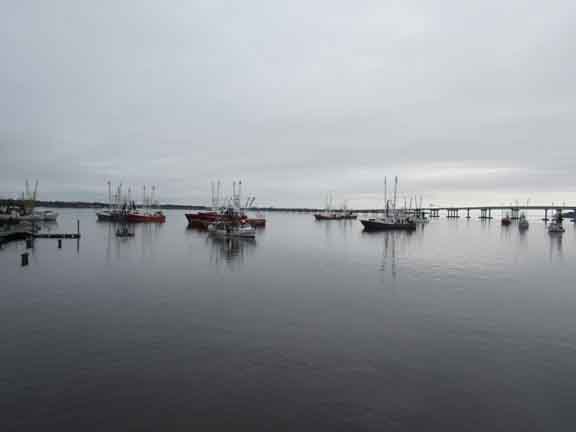 The Hwy 17 bridge to Little Washington is in the background

Returning to the river walk, the three of us walked on to the tip of Union Point, which is on the Neuse. 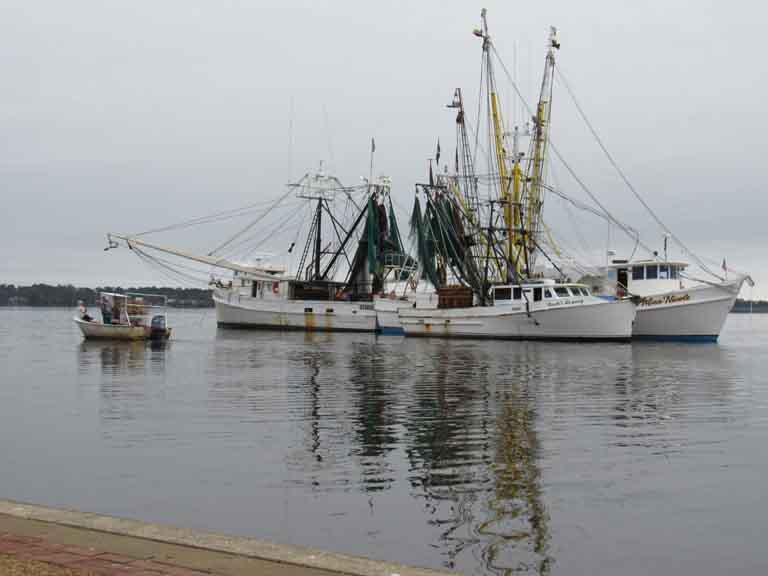 The brick pavers are part of the river walk 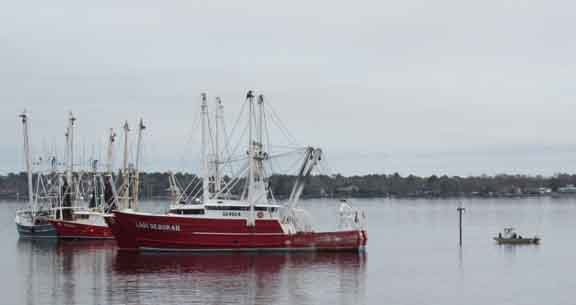 An example of large trawlers

While at the point, I met Elizabeth Tew, of WNCT.  She let me know the basics of the hearing to be held at 12:30 in the convention center. 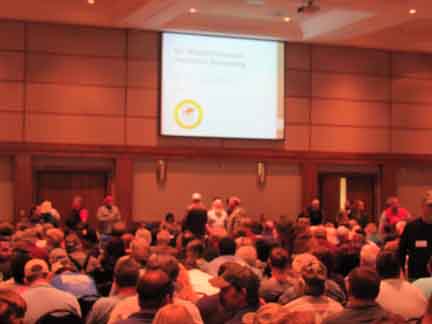 Two big screens were on on opposite walls. Commission members could see the pair which were behind the public. It was the largest public hearing I’ve ever attended.

“NEW BERN, N.C. (WNCT) – Hundreds gathered at the New Bern Convention Center for a public hearing on a petition filed by the N.C. Wildlife Federation designed to add regulations on the shrimping industry.

Before the shrimpers made their way inside, dozens started in the waterways, with trawlers coming from miles away to attend, all in a show of solidarity against the regulations.

Trawlers came from Pamlico, Brunswick and Carteret counties, just to name a few.

The federation filed a petition in November to add regulations on shrimpers.

Other proposed regulations require 60-count shrimp in the Pamlico Sound before trawling could begin and designate the sound as nursery waters.

Hundreds gathered at the New Bern Convention Center as five advisory groups questioned the federation about the necessity of the regulations.

The N.C. Wildlife Federation points out three species of fish are already depleted in North Carolina waters due to excessive bycatch.”

The Federation’s petition for being regulated to fish only during daylight seemed out of touch with reality since some NC shrimp species are nocturnal. As to the Federation’s petition item that the season be opened only after the shrimp sizes reach 60 per pound, the Federation didn’t have an answer as to whether the season would close when samples showed more shrimp per pound (smaller shrimp equals more per pound) occurring during the season.  That lack of thoroughness in developing their petition was evident in other aspects of their presentation as well.

In my opinion, one of the strongest comments from one of the commission speakers concerned fish reduction as a result of farm waste and city sewer releases making its way down the rivers into the Pamlico and Albemarle Sounds.  That speaker made his point that the Wildlife Federation (the petitioner to the state agency) had shown no effort to account for the massive amount of hog farm and chicken farm waste, nor focus attention to those sources before blaming shrimp trawlers for the reduction in fish in the sounds.

Overall, I felt the Wildlife Federation’s arguments lacked enough substance to offset the input from the state’s commissions and from the fishermen themselves.  It’ll be interesting to see how the State answers the petition.

News Reporter Elizabeth Tew quoted David Knight with the N.C. Wildlife Federation as saying, “We are not trying to ban shrimp trawling in North Carolina. We are trying to protect what we believe are juvenile nursery areas in North Carolina…To do that, you have to restrict some of the trawling going on in these waters.”

My thought on Knight’s quote is that if the shrimpers become so regulated as it to be impractical to stay in business- a ban will effectively occur.  Consumers will not buy shrimp if prices get much higher than the $8 to $10 a pound one finds in local fresh seafood markets.  If buyers aren’t making purchases, there’s no way for the shrimp boats to stay in business.

Sustainable  fishing would automatically occur if all trawling had to be done by sailing vessels, without aid of power while fishing.  The Ada Mae, now berthed in New Bern as an educational boat, is an example of how fishing was done before fishing stocks began to be “depleted”.  Perhaps the old ways need to be revisited. 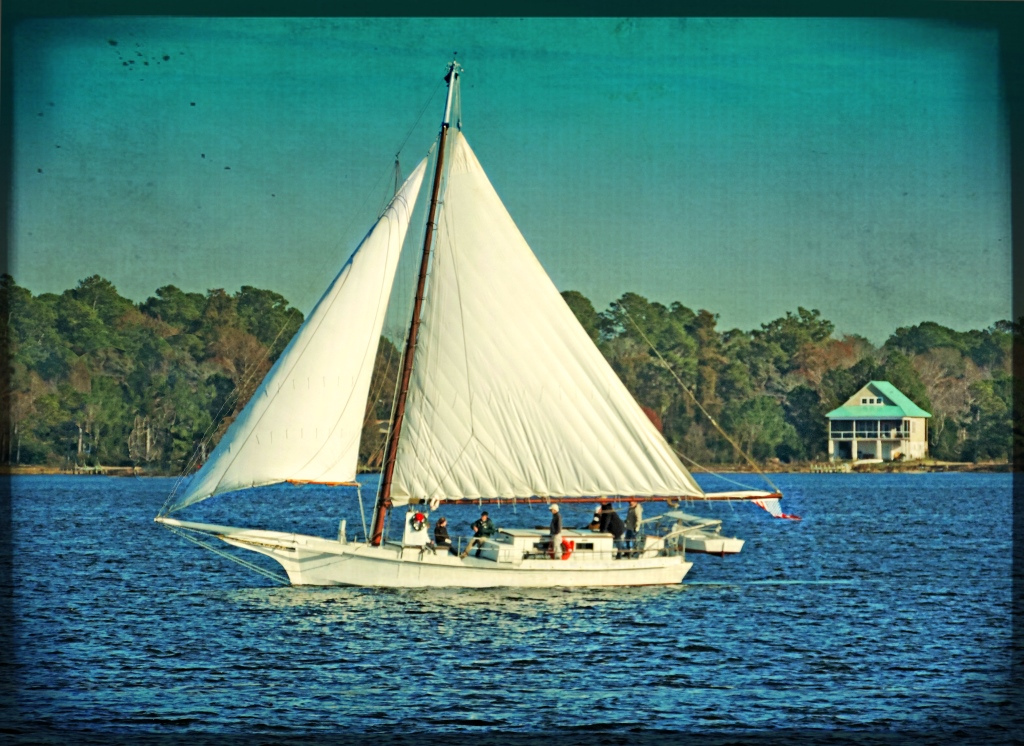 Think of  shrimp, fish, and oysters obtained while sail boat fishing as being “Organically Caught”!

The story / blog of Yacht A Fun, a Gemini catamaran sailboat, traveling the ICW and east coast with insights to the extended cruising life. Shrimp Trawlers in New Bern