Having worked all week on our Gemini sailing catamaran here in Oriental, NC , I was ready for a more leisurely pace for Saturday.

Diann and I awoke around eight and after making coffee decided to go to the Farmer’s Market at Town Dock. Produce is out of season, but honey is available from Patrick Del Reo of Pamlico Bee Works. Patrick is a certified Beekeeper. Other vendors were in attendance offering bread, yard plants, and art. 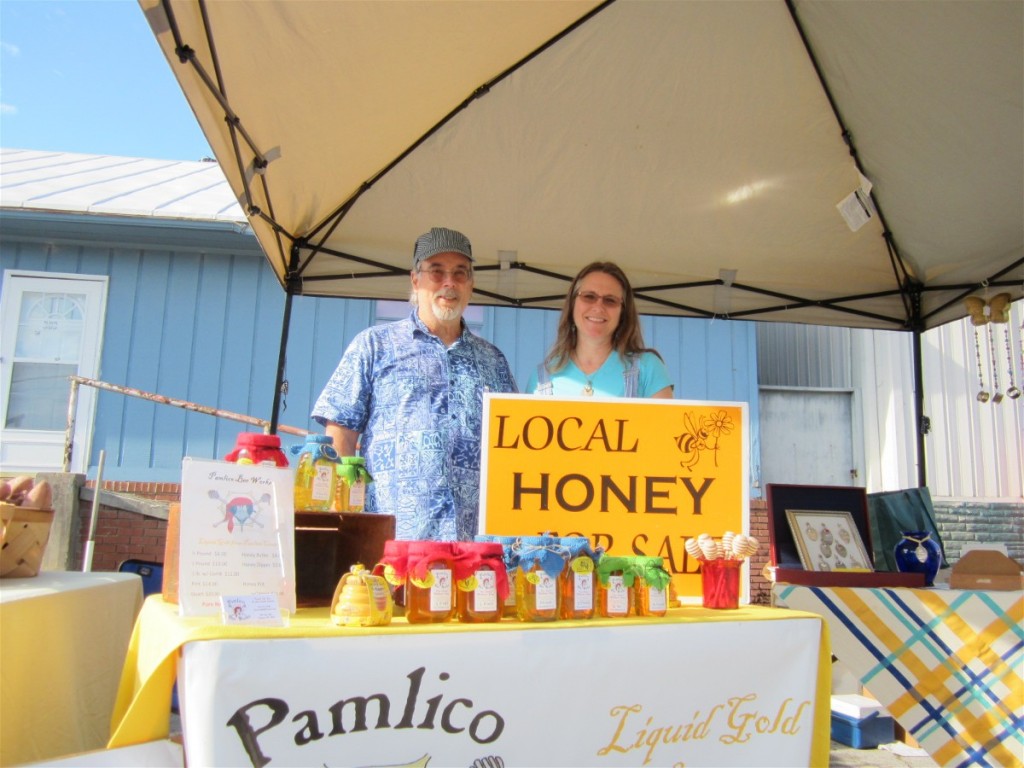 The business part of our mission was to get cardboard for mocking up the panels which will surround, and make water proof, the new holding tank containment area. Inland Waterway Provisioning Company had a number of boxes headed for recycle- we snagged them thanks to store manager, Pat.

Diann’s to do list included buying glued Fly Strip Ribbons. Off to General Dollar we went. (After later hanging a ribbon we found we had no flies in the boat. Now that’s a preemptive product if I ever saw one !)

Tiring of grilling bird, pig, or cow- we decided on spaghetti if Endurance Seafood was closed. But fortunately Endurance was open.

The seafood place is three driveways after crossing the bridge at Oriental. Keith and his family live in an elevated home off the canal / creek at Pecan Grove Marina. Keith fishes early in the mornings and returns to his docks to sell to regional delivery services, as well as to sell fresh to local folks.

Keith was not in, but his son Ben was prompt to check in with us as we stood at the shed. 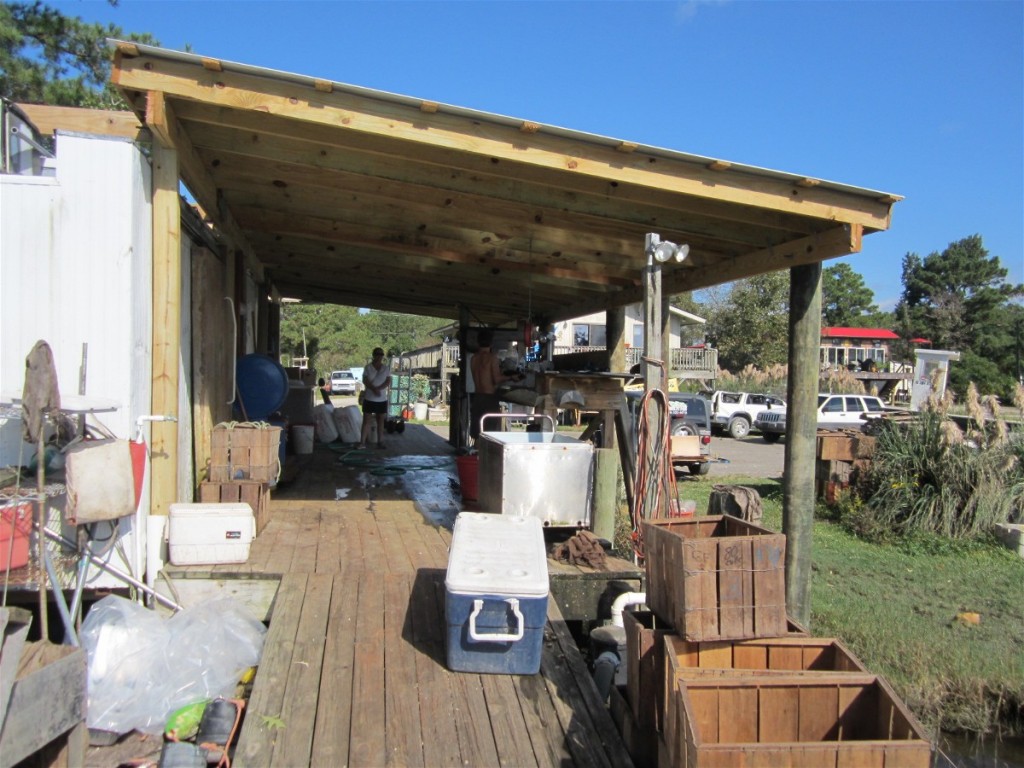 After Diann decided that flounder was what we would have for our evening meal, Ben took down a pole net and scooped out a live flounder from the large fish tank. 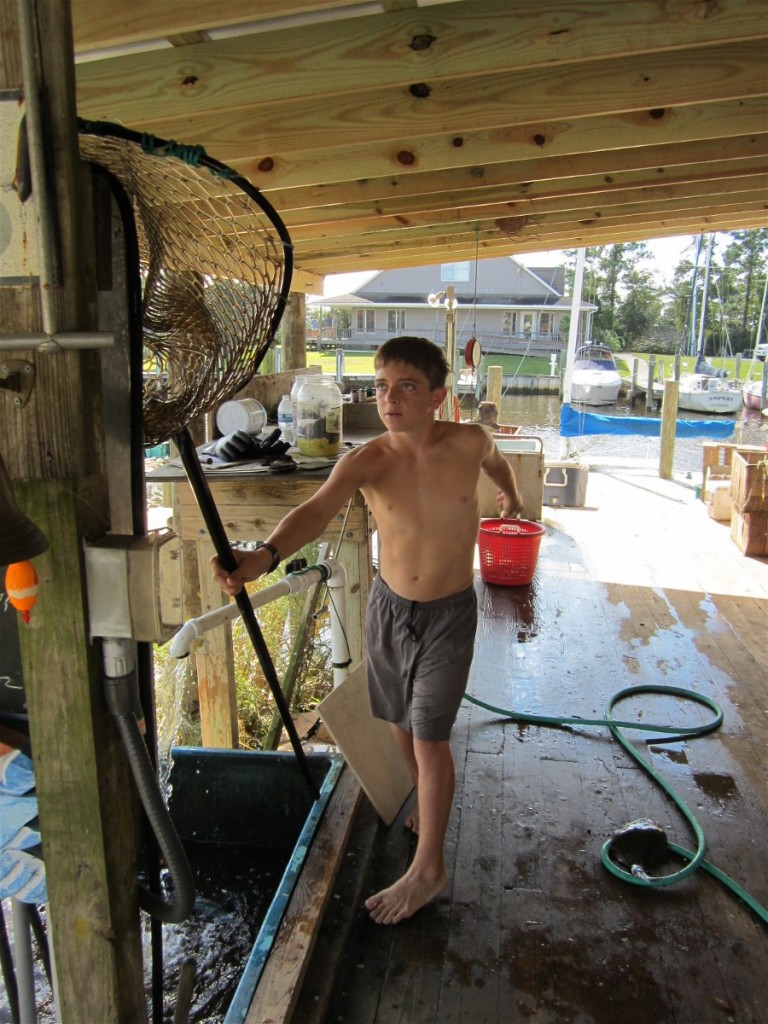 It was bigger than we would eat for one meal and so returned to the tank. 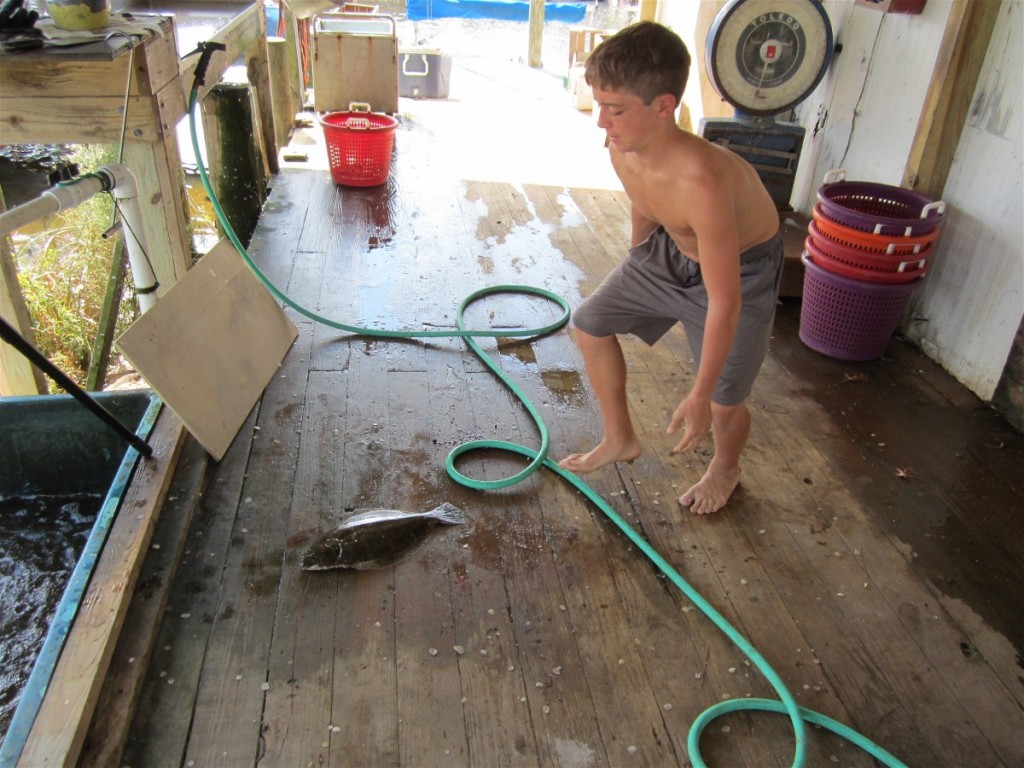 A pound-and-a-halfer was on target. Ben killed it first, scaled it, and cut out four fillets. These images turned out better than I expected. I particularly like the one having Oriental’s harbor in the distance while Ben does his work. 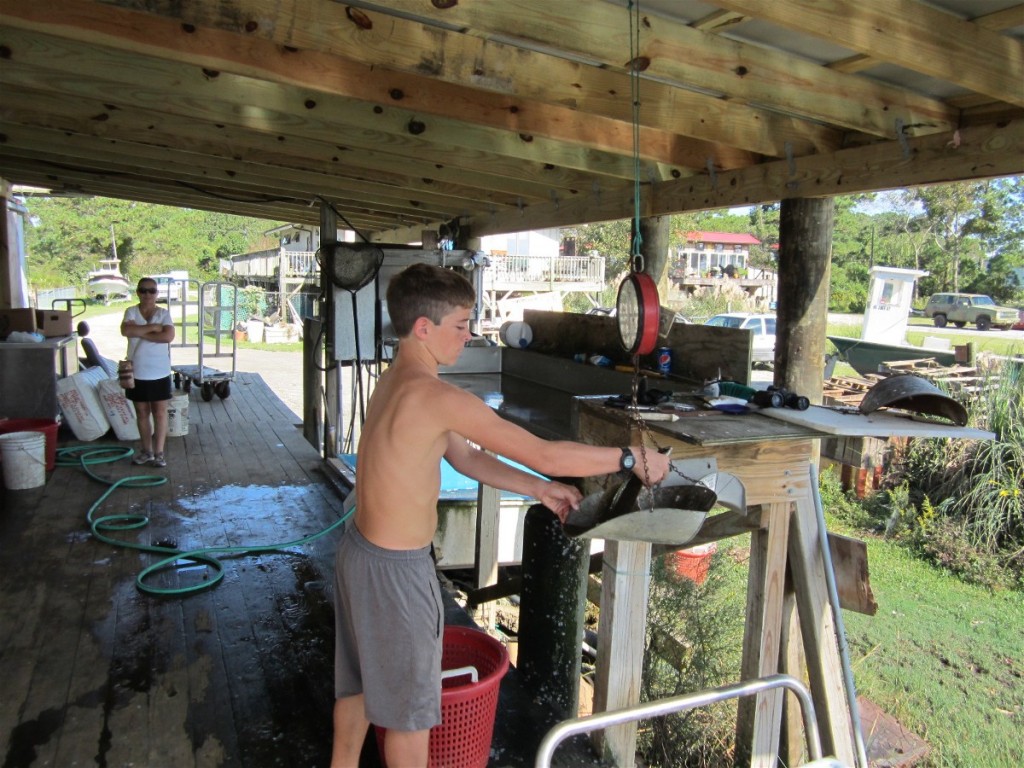 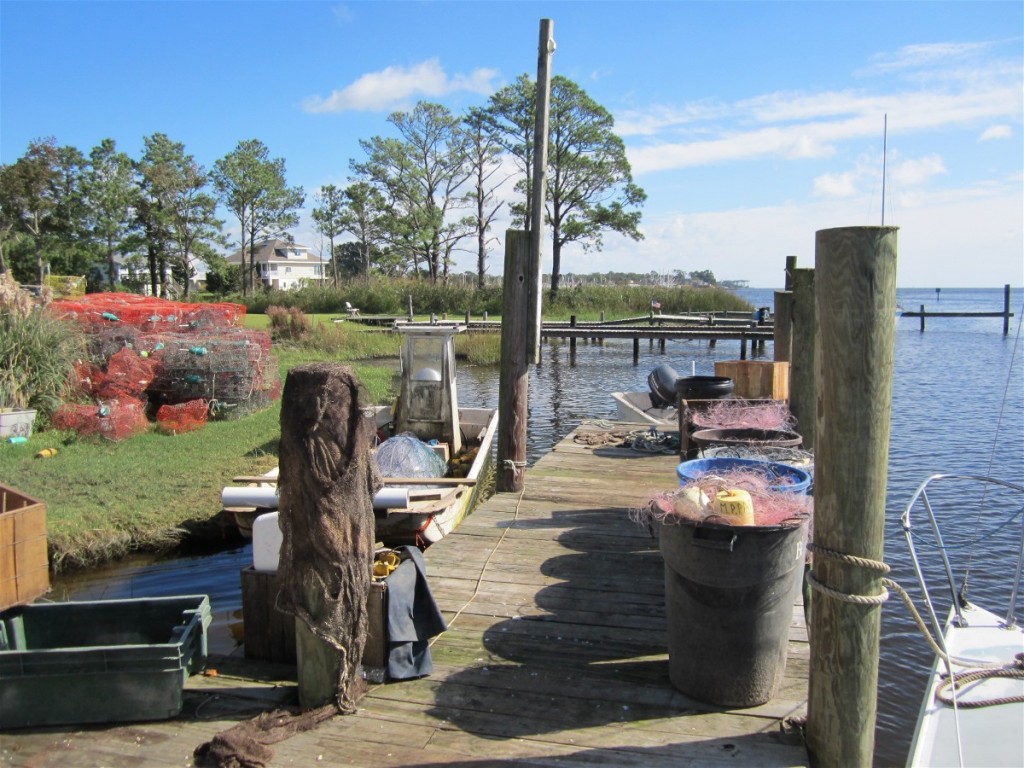 Diann and I returned to the boat. She vacuumed the interior of gravel dust from the boatyard. I set about working on the initial parts of the cardboard mock up. 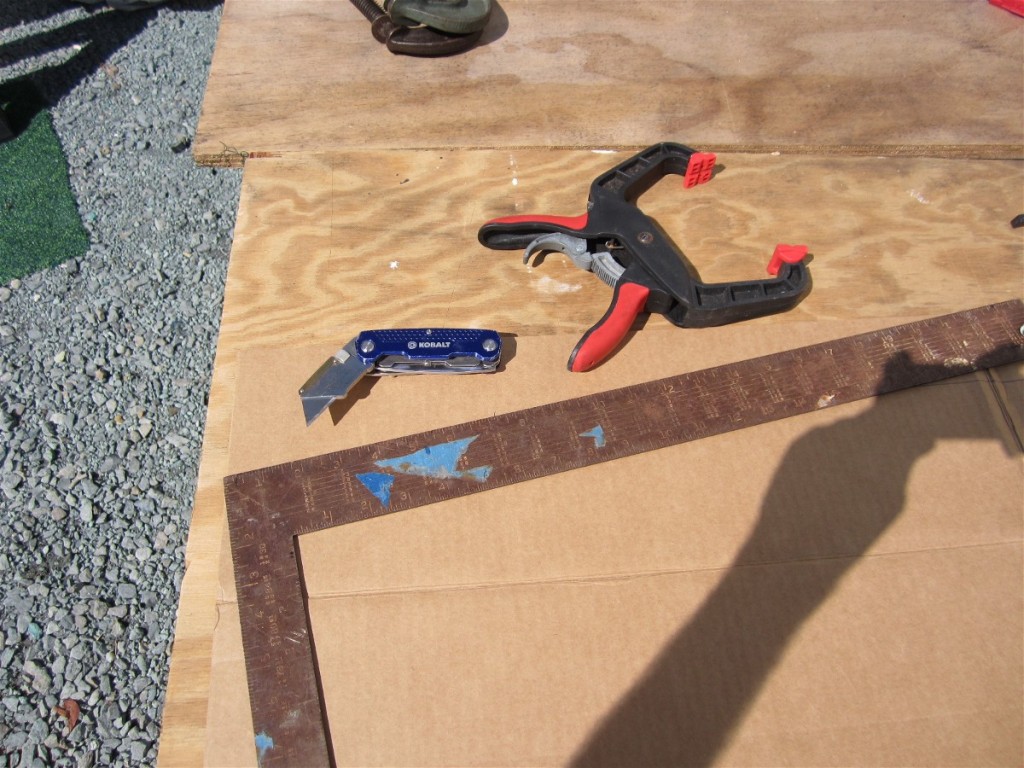 Tools of the mock up

Once the measurements were transferred to a single cardboard strip (and verified by placement) a triple thick version was fabricated using quick dry wood glue and by orienting the center corrugation 90 degrees to add strength.

And the initial pieces fit!

At five pm Diann declared our day over. She took a shower first. Meanwhile I rested on the bed and mentally reviewed variations for constructing the container’s sides and top cover method.

Two fillets were seasoned with butter, salt, and pepper. The other two were seasoned with McCormick’s Old Bay and a dab of butter. Then each pair was wrapped in separate foil pouches and cooked for ten minutes in our Magma Catalina grill.

The fish had been alive just hours before served. It was some of the best flounder I’ve had.

To finish up our Saturday, we went back to Town Dock to enjoy guitar music which began at 7PM at The Bean. Having, for years, enjoyed viewing the town dock from www.towndock.net , as I sat at my business desk in Hickory- it was special to be at the very location which is the subject for so many followers of Oriental happenings. 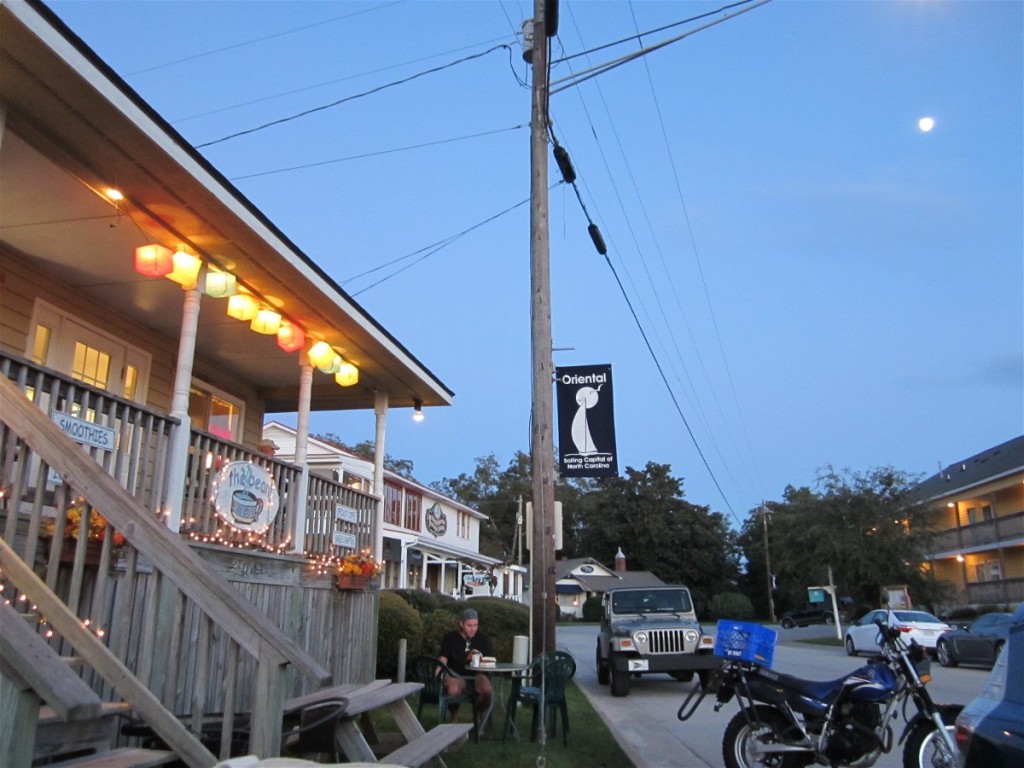 Lanterns and an almost fullmoon at Twonock and The Bean

Having an almost full moon overhead wasn’t bad either.