Our Gemini catamaran, YachtaFun, can handle seas that have waves of over five feet- if the period between waves is long.  But, the wave periods on our most recent two outings (from crest to crest) seemed to have been in the three second to 4 second interval.  Small waves aren’t too bad.  You get a bit of bounce, like choppy river waves.  Small catamarans steer constantly in even small waves having short periods-  because each pontoon says hello to a different wave during small intervals of time.  I call it squirreling.  Somewhat like indecisive squirrels trying to cross a city street- back and forth action. 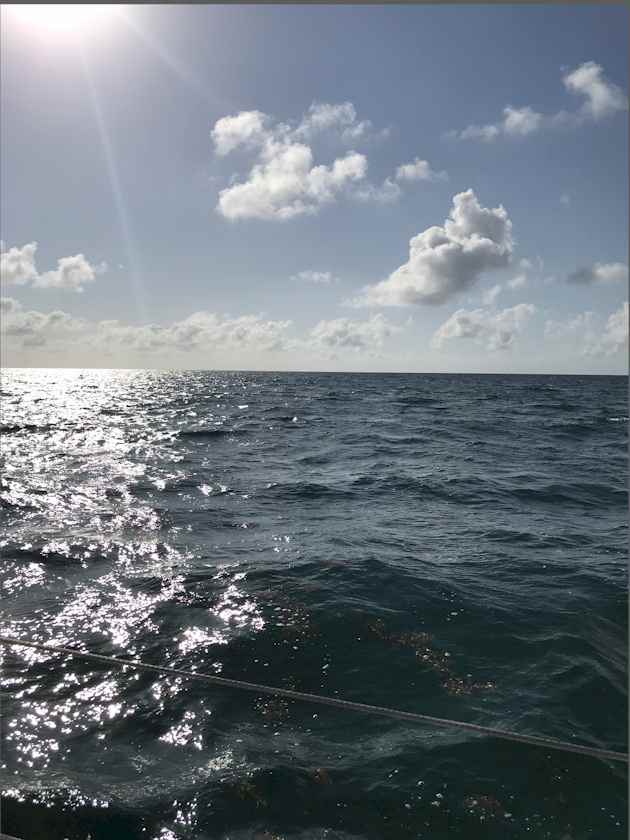 We left Key Largo, Saturday, with waves being forecast at 1 to 2 feet.  For the most part, they were two feet in height.  The boat’s rolling action from waves was uniformly squirrely. Ones arms get lots of exercise!  It wasn’t uncomfortable, just tiring.  The trip from John Pennekamp State Park mooring field to Key Biscayne was about 10 hours.

For our Sunday leg to Ft. Lauderdale, we felt okay with the near shore forecast of 2 to 3 foot waves.  I wanted the experience of handling that wave height;  and really don’t want to go thru the 19 or so bridge openings on the ICW from Miami to Ft. Lauderdale.

Meeting the cargo container ship as we were about to enter Governor’s Cut inlet channel was not disconcerting.  Loosing about 1.25 miles per hour to the inflowing current was not unexpected.  Dealing with a bit of  “wake wallowing” with discourteous drivers of large motor yachts is just part of boat life.  The ocean waves- is the other part of this story.

NOAA had forecast 2 to 3 foot waves.  What YachtaFun climbed over, as we exited the inlet, was certainly three feet.  Given that the crest spacing expanded and contracted relative to our 34’ length- sometimes the stern would be carried upward by a passing wave, as the bow plunged down the next wave- and met the subsequent wave with the bow in the trough.   Our kayak had been tied across the bow’s bridge deck for such action.  It stayed in place.  On more than a handful of occasions the bow plunged deep enough that spray exploded upward and rained onto our saloon windshield.  One wave did slightly top the bow bridge deck- but without washing back over the kayak.

All of this action and we hadn’t quite made it three miles out of the cut.  But, three miles off shore was where we’d be motoring to Ft. Lauderdale.

Quartering waves makes it easier to climb and cross them.  That is true.  However, while the frontal assault nose plunging issue is mitigated, the wallow factor comes into play if your course doesn’t allow a full 45 degree quarter.  As we tested the course, we were at about 22 degrees to the right of the ridge crests, so the wave height affected us on the beam.  Our starboard hull lowered into a trough.  As I looked at the oncoming wave crest, I could see that it was more like a four footer.  The ride was safe but it sure wasn’t fun.  Plus, too much of our shelf items would be destabilized if that action lasted five hours.  With that knowledge, I spun the boat around and headed back through the inlet and cut.

A lesson learned-  plan a proximate return anchorage / slip that offers quick access.  I had been so confident of being comfortable with the exit from Miami, I didn’t pick a “hidey hole” close to Governor’s Cut.  Had I done so, we could have rounded the Port of Miami island and anchored not too far from the causeway bridge.  That would have been close to the cut, or further along the ICW if chosen for our departure.

We motored, instead, some 12 miles from our offshore turnaround to arrive in Coconut Grove / Dinner Key.  And it was blowing 15 MPH.  And YachtaFun was being crabbed sideways as we worked thru the tightly packed moored boats. Blog readers know we love Coconut Grove.  It is a good stop over.  But, we were disappointed that we didn’t make Ft. Lauderdale as planned.  But, this delay is exactly why we don’t set tight schedules for boat travel.  Next time our delay could be wind or rain???

The story / blog of Yacht A Fun, a Gemini catamaran sailboat, traveling the ICW and east coast with insights to the extended cruising life.  Offshore Experience