We should have stayed at Alligator Creek today. Instead we made an attempt to get to Beaufort, SC for a mooring ball and the conveniences of town.

Diann had researched the winds and indicated that at Edisto they would be in the mid to upper teens, to 20MPH, with occasional gusts to 30. My reply was, “that’s at the coast, we’ll be inland on the ICW”. Toooooo cavalier on my part. I failed to look at a bigger scale map to see how the Coosaw River merges and flows right passed Edisto Beach. Traveling the ICW isn’t all creeks and cuts. 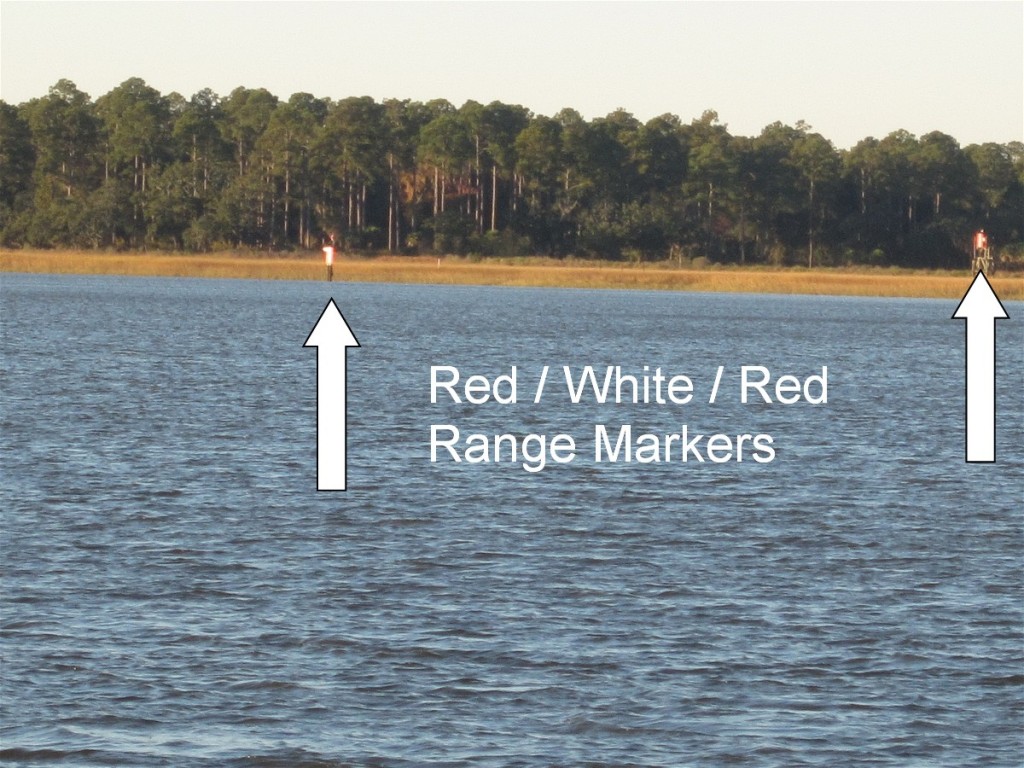 So, we motored quite well in those inland creeks and cuts leading to our exit into the CooSaw River. Like our Georgetown experience, opposing tide and winds made up for a rough ride.  We ran the iPad chart software full time again today. 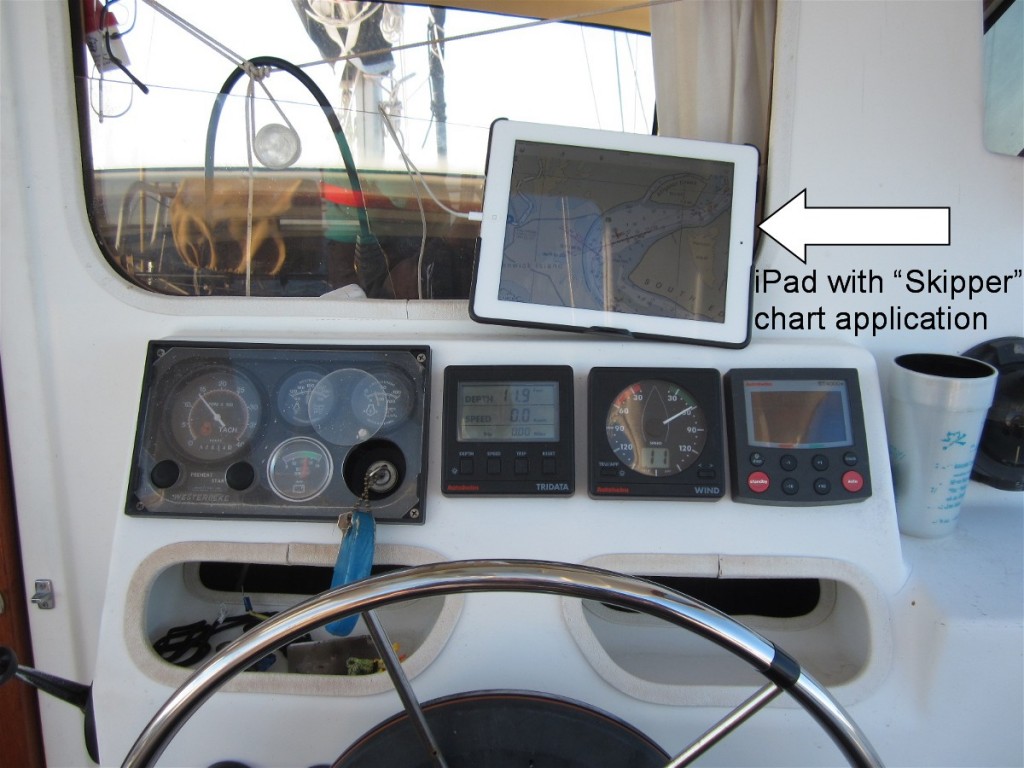 Winds were 20+ at times. Waves were of short period. Yacht A Fun’s bow surged upward over the top of some waves and met others at their troughs. It was a pitching ride on our Gemini catamaran. Items that normally stay put inside, found the floor. It was worse than our Georgetown experience.

For the record….. securing the hatches will be on our revised checklist for departure. We had our main berth’s hatch closed- but not dogged down. Water pressure from the bursting waves, flowing across the bow, found the way in and wet the linens.  They are drying in the sun and wind…

To minimize the pounding, I cut back on RPMs / boat speed. We ran at 4 miles an hour. There were times I’d have to up the RPMs to push against the wind / wave combination so the Gemini catamaran could regain its heading, and then drop back to 4mph.

At the point we ducked into Parrot Creek (our hidey hole for today) we were well over two hours from being able to complete the Coosaw River section to Beaufort, SC. Two more hours of rough boating, with the possibility of it worsening, was cause to quit for the day.

On a side note: catamarans don’t heel over much. But since catamarans have two hulls bridged by a flat inner deck, there is bridge-deck slap from taller waves. Had we been in a mono-hull boat we would have had the same pitching, but not the jarring slaps as we burst the waves. Now at anchor, we aren’t rolling side to side as a mono-hull would be doing. Trade offs for the two styles are just part of the mix.

Knowing we needed plenty of anchor holding scope to mitigate the high winds, we were forced to anchor in an exposed area of Parrot Creek vs. side tracking off Parrot Creek into the narrow Bass Creek. We have down: a 35 pound Delta; 20 feet of 3/8 inch chain; the main 5/16” rode; and an attached 5/16” rode for more length. All together we have about 200 feet of gear out for the 20 feet of total depth expected thru high tide.

The winds howl and waves are rolling into Parrot Creek. The booming bridge deck pounding from the Coosaw is far less here. But we are getting roller waves coming in and resulting booming slaps from some of them. We’re safe, but would have simply been more rested and better off to have stayed put this morning. 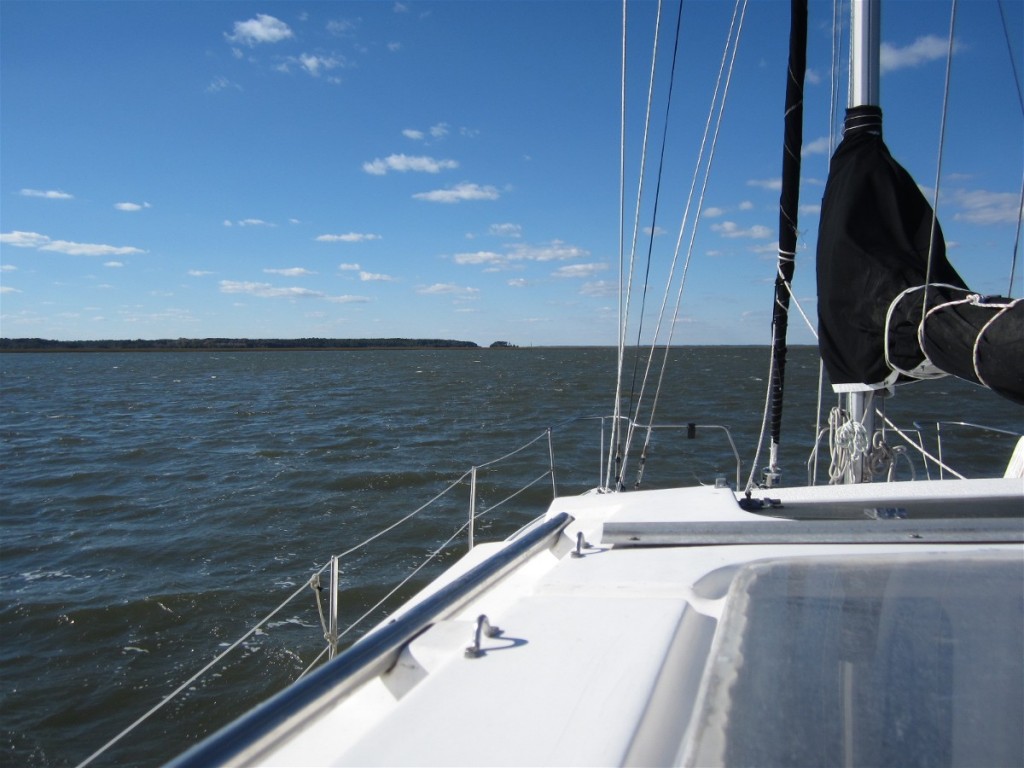 Rolling waves, some with white caps- wind about 18mph

Diann and I reviewed how we had analyzed the day: wind, tides, current speed, and current flow direction upon approach to the Beaufort bridge and the Beaufort City Docks. Today gets marked up to more lessons learned. A big lesson- just because you are already three weeks behind in your original extended cruise schedule, doesn’t mean you can make it up on marginal days.