In the earlier post, about minimizing the plop-plop slapping noise of our Gemini catamaran’s hull when we are at anchor, we had just finished laminating the polystyrene and propped up the assembly as the silicone adhesive cured for two days.  We are now done!

The sticks were removed so that we could shave the laminated strips. 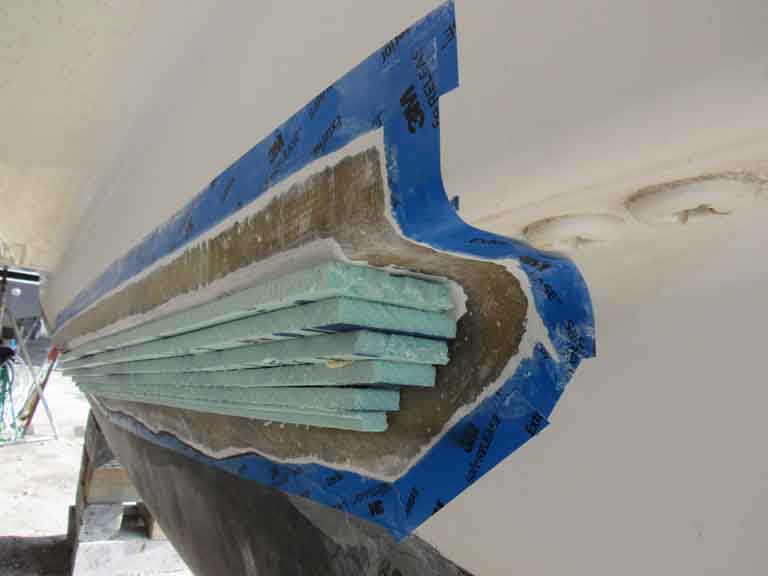 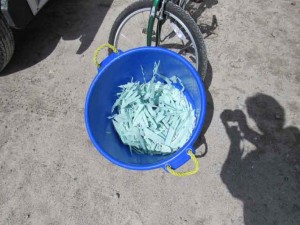 Using a Cuto brand bread knife (circa 1969) the foam was shaved to 45 degree angles off vertical and horizontal.  Then the intersecting 45s were themselves shaved to an angled curve. 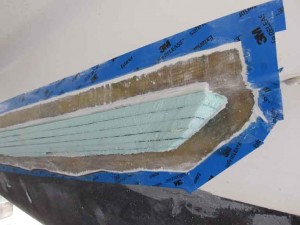 West System 410 was mixed with 105 resin and 206 (slow) hardener and spread like peanut butter to fair the strips’ transitions. 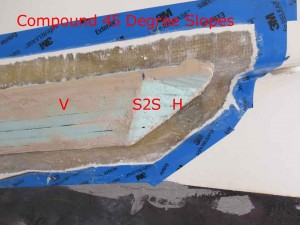 We wet the foam with 105/205 and after hanging six ounce glass cloth we roll wetted the glass to adhere to the shape of the new foam. 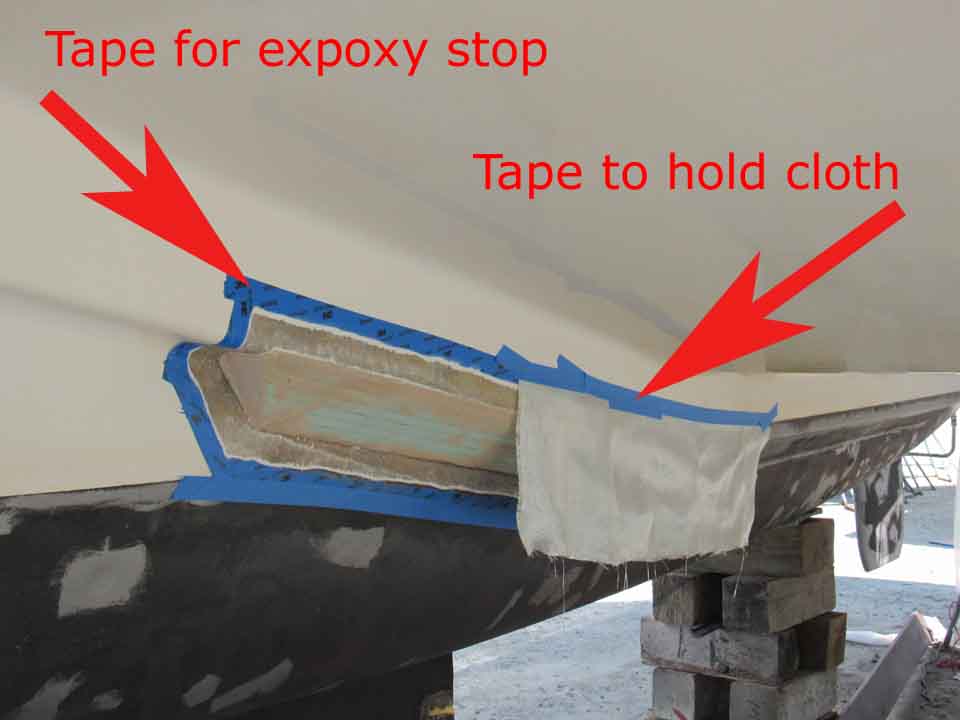 What’s particularly cool is that the West System does work well.  One’s learning curve isn’t too steep.  The number of needed man hours has been amazing, though.  No record was kept.  Diann indicated 30 hours of actual hands on doing.  To that one can add three needed trips to the hardware store for supplies beyond the initial amount;and  idle time waiting for layers to “gel” before applying more epoxy.  By doing the work ourselves, we saved at least $2,500. 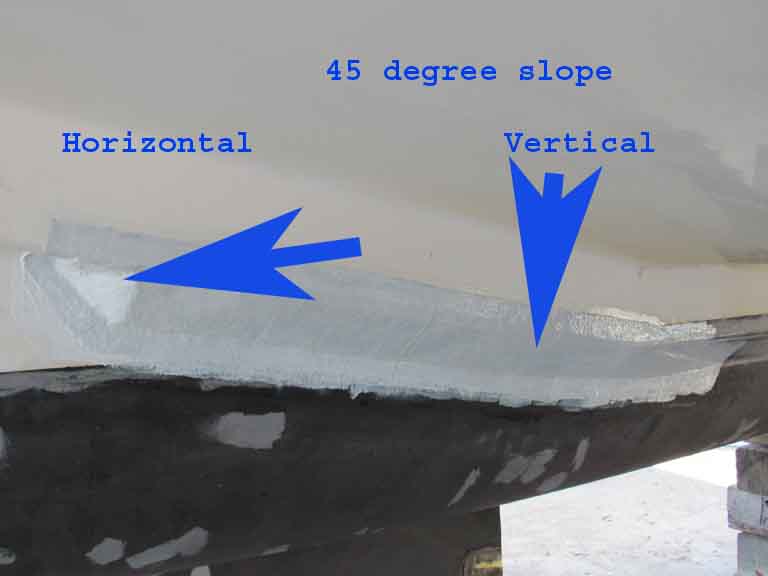 Diann and I discussed the virtues of different water barrier coats to apply to the newly applied glass.   After much search engine work and reading various articles, we opted to buy West System 501 white pigment and simply apply three coats of 105/205 and then two coats of 105/205/501. 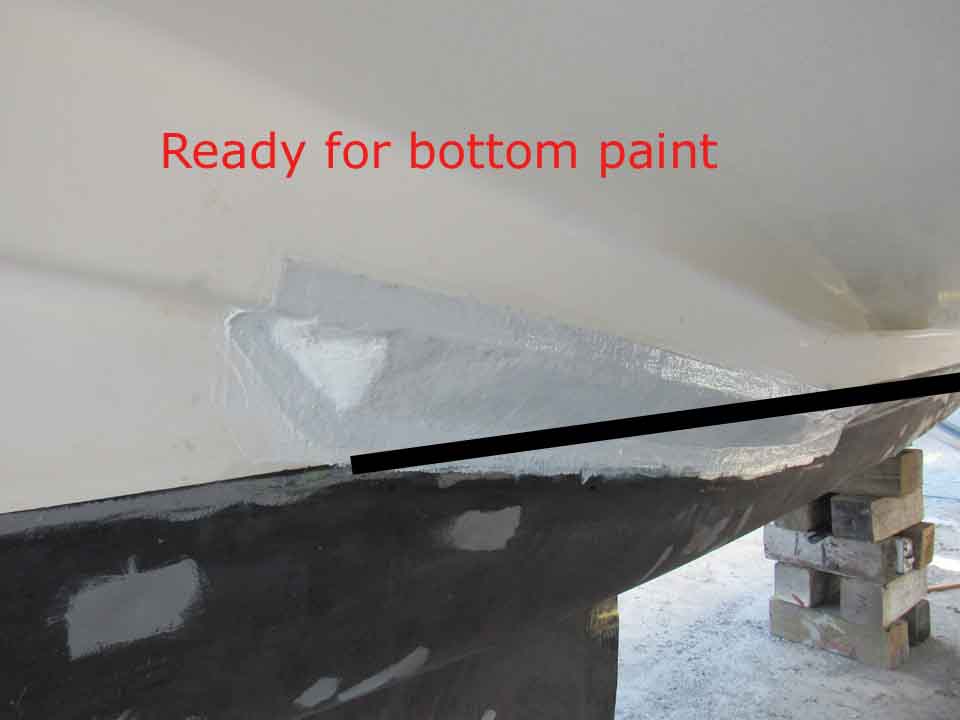 All together there are eight layers of epoxy and two layers of glass.  To say its solid is an understatement.  Though the new epoxy finish is very shiny in comparison to the adjoining gel coat.  My belief is that six months of salt water will obscure the shine.

Once we are on a mooring ball or at anchor we’ll know how well our version of slap stopper works for our catamaran.

The verdict is in!  Having motored from Jarrett Bay to Oriental, motored from Oriental to New Bern, and sailed on the Neuse River for four hours- we can say that slap sounds have been greatly reduced.  The small pocca-pocca sounds from the forward bridge deck area are gone.  All we hear now are the bigger boom sounds from waves reaching the rear flat deck area.

Being moored and anchored will obviously be “more gooder”, too.

The story / blog of Yacht A Fun, a Gemini catamaran sailboat, traveling the ICW and east coast with insights to the extended cruising life. Bridge deck slap