The starboard saloon hatch was pulled; deck cleaned; screw holes enlarged with a ¼” bit; West System 610 epoxy (in a caulk style tube) injected into the minor balsa core damaged area and injected into the enlarged holes. What to do while it cures?

Off to Village Storage to get the Alliance Dingy and take it to Will Flanery’s to have inspected to see if we can sell it.

Back to the storage facility and loaded the tool safe. It’s a multi hundred pound rolling chest that’s 4 feet wide, 2 feet deep, and 2 feet tall which has all my major tools in it. It won’t easily roll on grass or gravel and so I have several slices of plywood for movable tracks.

Went by the hardware store to top of our little 5 pound propane tank,

Went to Walmart Express for Italian sausages and spaghetti fixings.

Got the box back to Deaton’s and rolled it off in the space at the rear of where the boat will be when hauled. And Diann remarked, “this thing is really hot from all the sun.” Since there is a gallon of alcohol and two gallons of paint stored along with tools…. back to the storage facility I went, to get the white repurposed picnic tent as a sun shield.

Went by Inland Provisioning for a bag of ice.

By the time the tool box was sun protected, the epoxy was hard enough to drill. Using the number 10 stainless screws as a guide, I selected a bit to make pilot holes.

Then the holes needed to be vacuumed out.

Then the butyl tape needed to be applied to the hatch base.

For contour of deck, I used a carpenter’s framing square as a straight edge to see where the extra margin of tape was needed. ( Curved deck, straight hatch base) And, applied the extra strips of tape.

Occasionally I get a hankering to settle back and just cook and relax. Diann and I had worked a full day and I was ready for a slow evening.

We went to the guest area of the facility and had showers.

When I opened the gas tank valve, it ooompted at me. Holly Moely- the regular was in the off position before I lit the long nosed grill lighter. No gas should have been present. Bottom line- the regulator had failed and was wide open. A turkey cooker doesn’t make more flame noise than the Catalina Magma Grill was making.

The late afternoon view was nice. 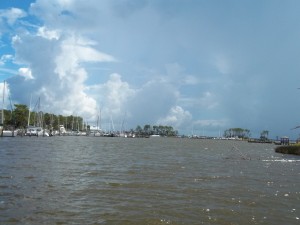 We had sandwiches. I went to bed early.