This week has been one of frustration and successful activity. Our boat yard took the replacement of the holding tank seriously and so set about trying to find one which would match the 13” by 13” by 24” size that had maxed out the existing cavity. Ooops, no one makes that size anymore.

So the bad news from Deaton’s on Monday was that we could only get a 15 gallon tank to replace our 18 gallon tank. Those who have small black water holding tanks know that smaller is not better.

I took over the internet search for a replacement tank and confirmed their efforts were correct. Well, since the wood & fiberglass panel, which had been removed to access the old tank, will have to be remade and reattached- my decision was to allow a new holding tank to extend into the sail locker- and build a bigger and differently shaped panel system. It’s from that locker that access to the tank area is available.

Losing locker volume to keep, or add to, holding tank volume is a no brainer decision for Yacht A Fun. When providing day sails and charters, the ability for guests to pee is a tad important- for all concerned.

But………….. we’re talking pieces of days this week to email and call multiple vendors to follow up on tank availability.

I took the time to fabricate a cardboard model to be sure it would fit properly. The problem………… that manufacturer doesn’t offer it anymore. They just haven’t updated their web site.

Then there is the company which makes a holding tank which is very close to the just mentioned tank. The problem with that company is that they don’t offer fittings where you need them, just where the standard locations are. Another dead end.

This morning we will decide from the limited options we have and order a tank.

We had planned to depart Deatons in mid October. The earliest a tank will arrive here is when we planned to leave here- and then it needs to be hooked to the new toilet, and subsequently have a water tight panel constructed around it. November 1st was when we planned to be deep down the ICW.

On a more positive note, we were referred to “The Grill Man” to fabricate the needed addition to our davit system to support our Magma Catalina grill. His price seems fair and the item is due in two weeks. Other activity which went well included my replacement of the rubber bellows for the propeller drive leg; building a platform to mount the horizontal propane tanks to; cutting and mounting a shelf board into a hanging system for Diann’s C-Pap machine, and waxing the outer sides to the two hulls.

Diann rented a car on Tuesday to visit her daughter and grand-daughter in Raleigh. (We had sold her Sonata to eliminate the expense of multiple cars, and to add funds into the account for boat maintenance.) Yesterday I drove to New Bern to pick her up. While there I took advantage of the riverside City Park from which to call holding tank vendors. After getting as far with the calls as I could, I walked the City streets close by.

And that’s when I knew my pace had changed from my real estate career days. The sound of hard dress shoe heels was clacking louder as the pedestrian approached me from the rear. I was being passed by a walker going in the same direction as me!

Up until recently, getting from A to B was a matter of minimizing the time it took to do so. I prided myself in virtually sprint walking when in work mode. The woman who passed me was in business dress pants and tailored shirt. She was on a mission and was probably lost in thought about prioritizing what she’d accomplish next. I thought, “that was me until recently”.

With a further pause to reflect, I found great pleasure in knowing that my pace has changed. I made a long loop on Middle Street and took in the scene. 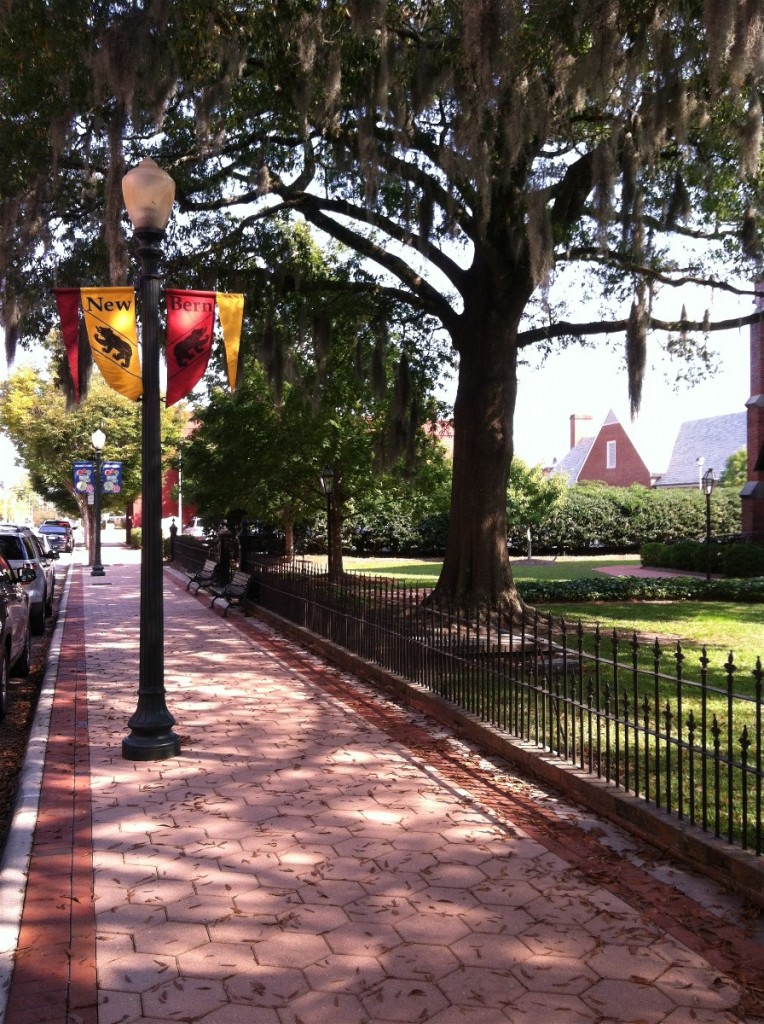 After picking up Diann at Enterprise car rentals, we returned to Oriental. Grocery shopping included visiting local commercial fisherman, Keith. We bought eight live crabs and steamed them for dinner. A nice way to spend a Thursday evening.

Four in the transfer pot; four more were steaming