Thursday, about six o’clock, I headed to the grocery store to pick up dinner. As I turned the street corner, at part of Deaton Marine that’s sarcastically called “the garden”, Jerry waived me to come by. 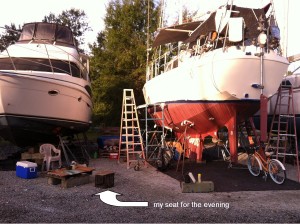 six of us sat around the make shift table

Jerry and Joanie are refurbishing a custom steel hulled boat on which they have cruised the world for ten years. That boat is now for sale. (Meanwhile a new, smaller version, is being fabricated back in Oregon.)

The next thing I knew, Jerry, Joanie, Jerry’s brother Don from Texas, Don’s wife, and I were conversing about boat repairs . Dinner was missed. In substitution were bags of various snacks and a modest amount of beer.

Eventually, the beer supply needed replenishing. So, I volunteered to go to the grocery store (my consumption having been well paced) and brought back Klondike bars, Reese’s Cups, and a case of Ice House. The Klondike Ice Cream was well received.

It got too cold by 10:30 to continue the stories. Pete, and his dog, were the first to give it up. I was right behind him.

Boat Yard stories told around a make shift table added a new dimension to my developing understanding of extended cruising.  Great people, from different backgrounds, added color to my own stories!

Friday was a very productive day for Yacht A Fun. Generator and main engine service work was performed. Though I could have changed oil and fuel filters myself, what I would have missed would have been items of deferred maintenance. Those service items, which I would have missed, were proactively handled by the mechanic. One such item was the need to tighten loose engine mounting brackets- a significant item indeed.

While Stephen worked at the stern of the boat, Ken installed the sea-water wash down pump at the bow. 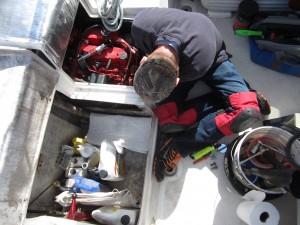 Meanwhile, I finalized the cutting of the holding tank cover. The photo shows the parts having been epoxied.

Breakfast at Brantley’s had been good. I was hoping for a seafood buffet for dinner. Brantley’s had a buffet, but it was limited to turkey, pork, ham, and popcorn shrimp. Decent food, but not special. 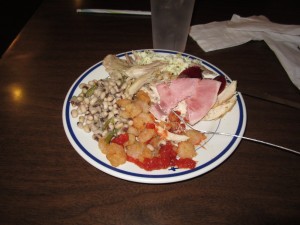