It rained in the early morning hours, and continued to do so right on past the time I got up- which was a bit after 9:30AM.  Darn,  rainy-day extra bed time is premium !

Preparing  coffee water began my wakefulness.   Zoey wanted to pee and poop- and that is an urgency after her full night’s rest.   Since it was raining I pulled out her rain coat.  It was originally Sable the Girl Dog’s.   Nice !

Zoey’s business done, I sat down to drink my beverage and check the news feeds.  Nothing shocking was reported  (relatively speaking).  So I began working on moving and naming images related to the Westerbeke transmission seal progress.   However, the concept of Brunch became an increasingly larger distraction the longer I played with the image files.

Baker’s Kitchen is one of the area’s primary breakfast restaurants.   My fantasy was to walk up to its front door at lunch time, get a quiet table and enjoy pancakes, eggs, bacon, grits, and their home made honey syrup.  The popularity of the restaurant was very evident today.  Patrons were seated on benches out front, seated in the interior waiting area,  standing on the sidewalk waiting for one of those seats, and qued up at the pastry take out counter.

I opted to do take out.  It would be vastly quicker than being on the wait list for a table, and would save me a couple bucks on the service tip.

Fifteen minutes later I had my double boxes of food.  Pancakes are kept separate from the other food.  It’s a volume aspect too.  Note the serving size. 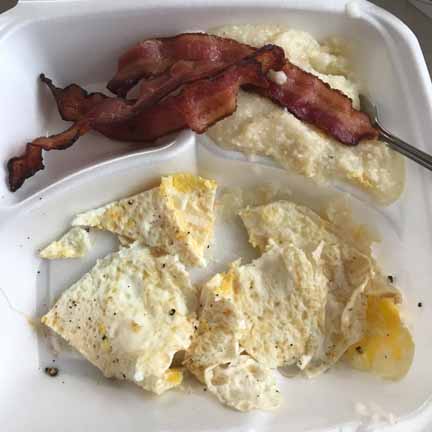 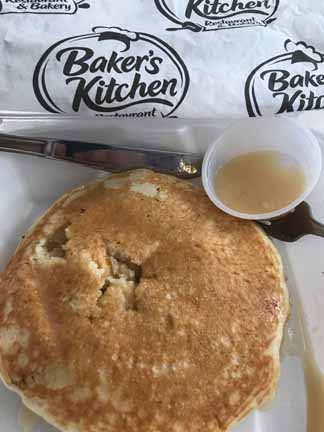 Note the syrup cup. There were two in the box.

A brunch break while working from Yacht A Fun.   You too can enjoy the life style.  Move onto your boat, find a place(s)  to enjoy spending time- and work while wandering!

The story / blog of Yacht A Fun, a Gemini catamaran sailboat, traveling the ICW and east coast with insights to the extended cruising life.  New Bern Baker’s Kitchen