Sometime in the summer, about 1957, my parents took me on a two week camping trip to Ft. Fisher. I was 5 years old. The first night did not go well as my Dad had staked the tent in sand. Winds picked up, during the night, and collapsed the tent as the stakes were pulled up from the force of the wind.

All our stuff was packed back up and we moved a little further from Kure Beach to the Gnarled Oaks which are across from what has become the Ft. Fisher Museum. 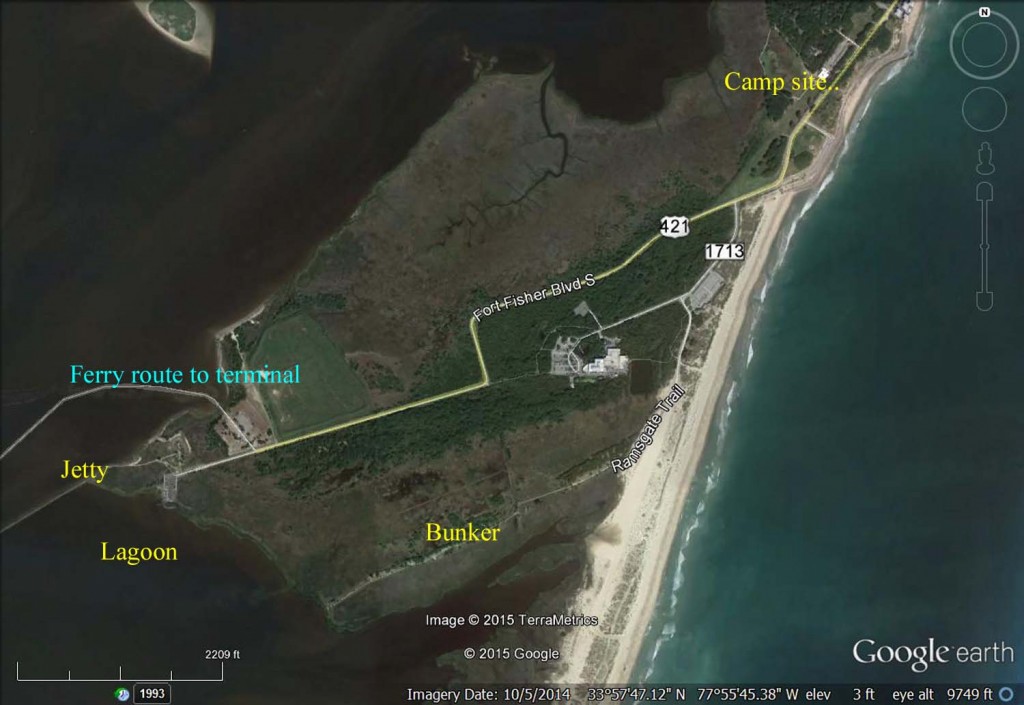 On Sunday, Nov 1st this year, Diann and I took Zoey for a trip from Southport to Ft. Fisher and to the rock jetty, to our 1957 campsite, and to the World War Two vintage bunker which was the residence of Robert Harrill- the Ft. Fisher Hermit.

The ferry between Southport and Ft. Fisher didn’t open until 1965. 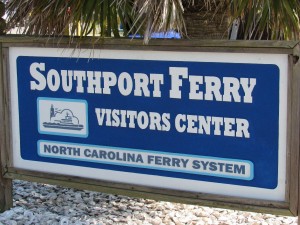 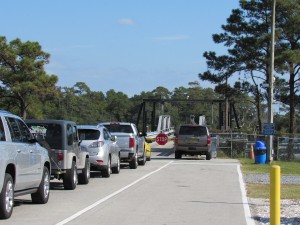 Q’d up for the ferry’s arrival 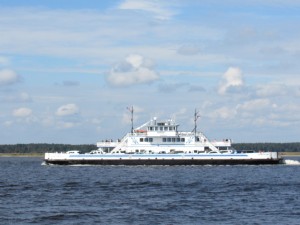 Zoey sat patiently that morning in a rocking chair at the Southport terminal while we awaited the Ferry. 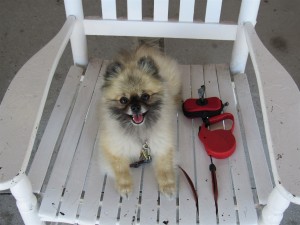 After the crossing Zoey was given her hat and sunglasses to wear. It having been some time since she last worn them- she decided to shake ‘em off. Bare headed she was happy. 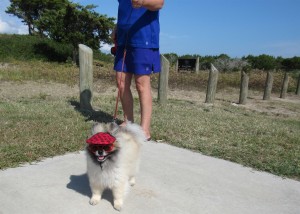 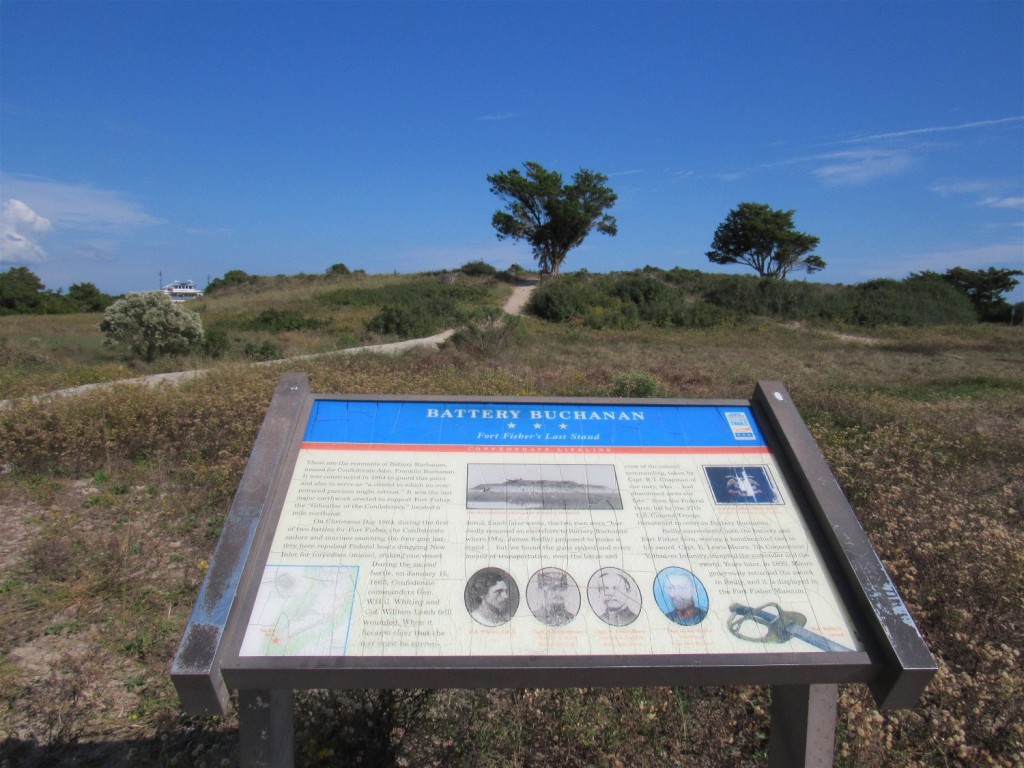 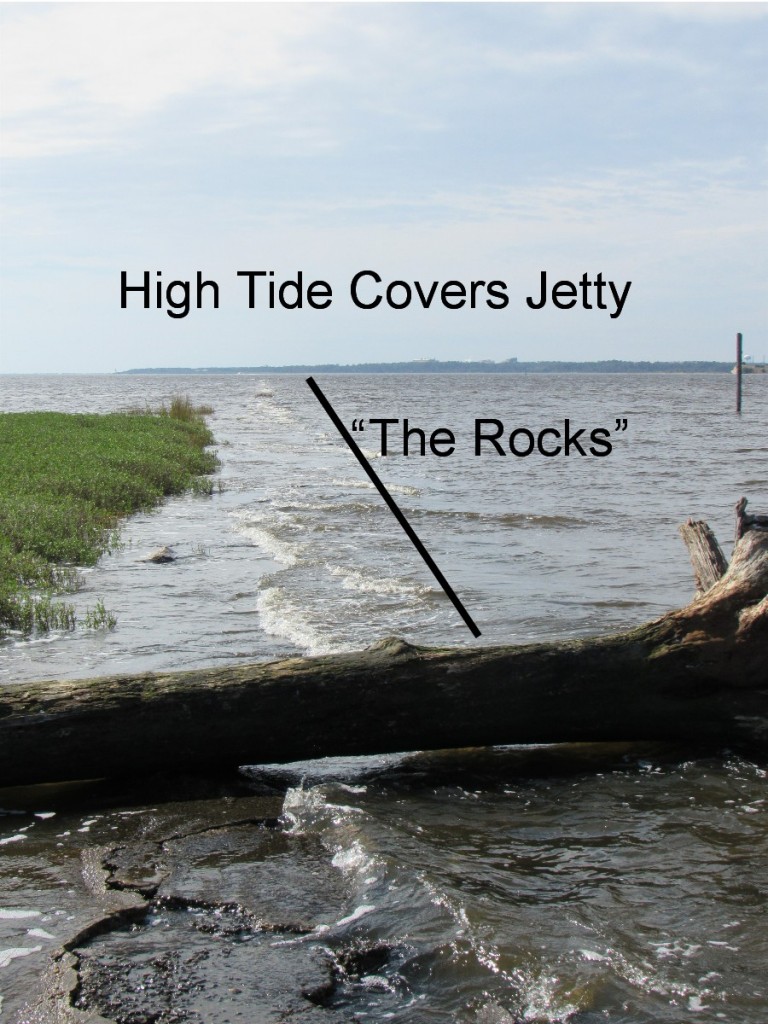 I can still recall the pungent smell of the Cape Fear salt marsh mud of my childhood. However, the tide was high when we visited and there was no exposed mud to refresh that childhood memory. 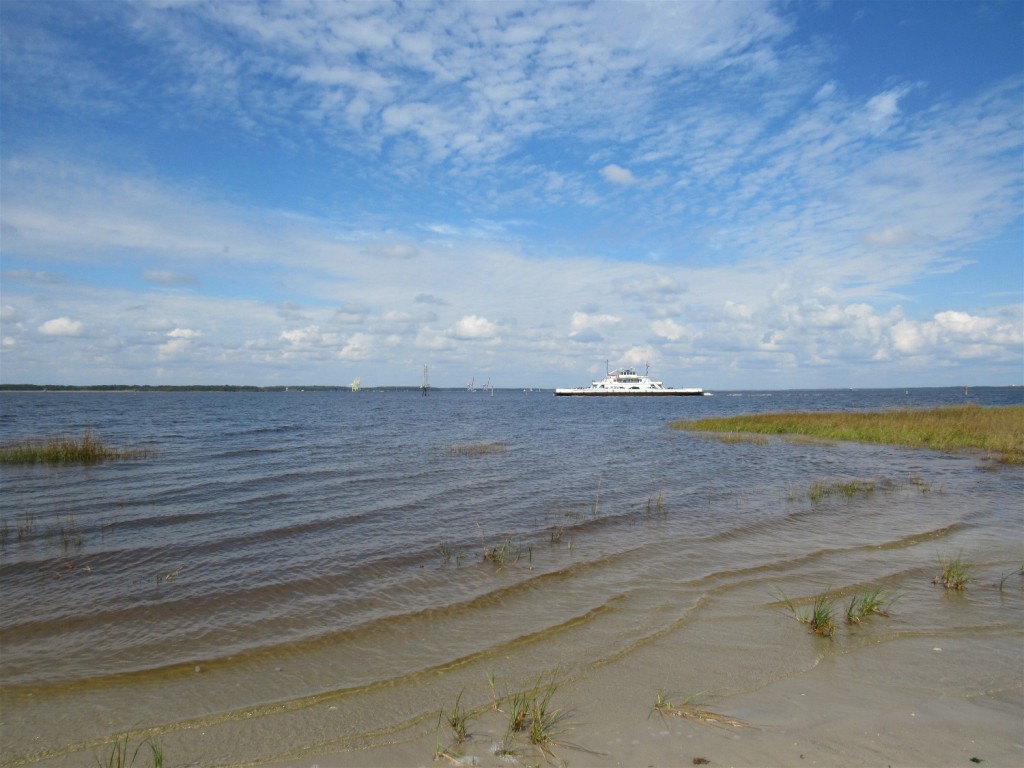 Looking, from the Jetty, at Ferry on the Cape Fear River 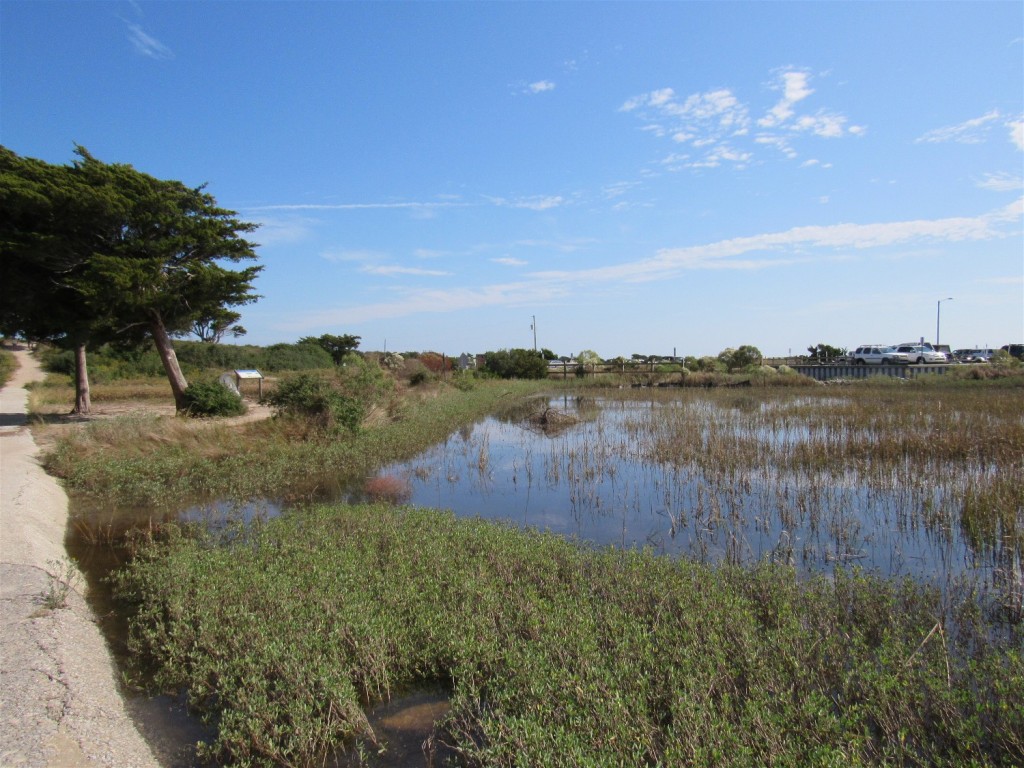 My uncle John Edward and his wife Helen, along with their three kids, joined us for a week of our two week experience. Fishing on the rock jetty / dam was part of our adventure.

So, too, was the adventure of flounder gigging in the lagoon formed between the jetty and the peninsula. John Edward had brought a flat bottom boat which had a car’s headlight attached to a battery for night time illumination of the lagoon’s bottom. The fish could simply be tossed into the boat with the young ’ns. I can’t remember if that headlight was suspended above the water or whether it dangled slightly into the water. That’s the nature of my 58 year old memories.

Due to the concrete base for what was then a steel tower, I am certain of the location of our camp site. The memory of the location is vivid due to a man and woman who climbed the tower to access the wooden platform on top. Just under the platform the woman’s hand hold slipped and she almost fell. My family saw the incident. Had the man not caught her dangling arm, she might have not been able to retain her grip with the other hand. 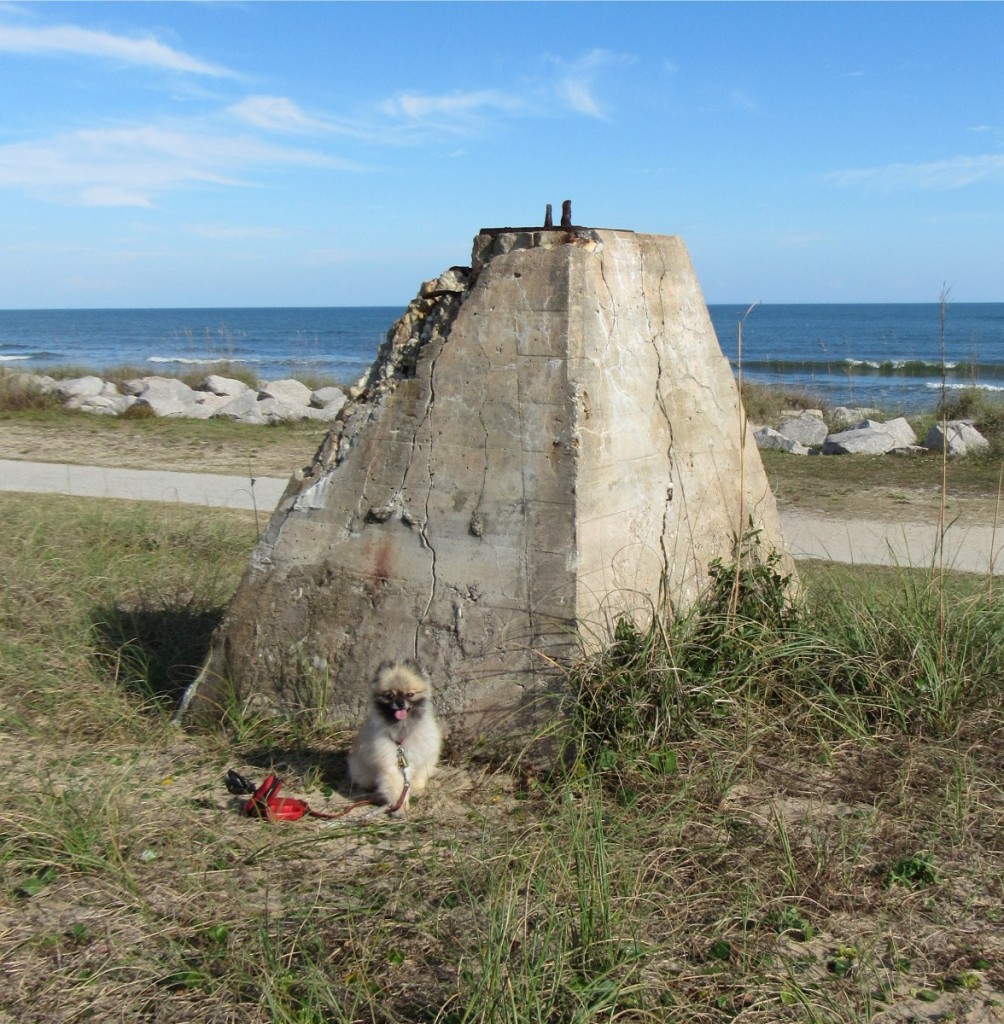 Our tent was “pitched” under and among the forest of gnarled oaks. Skunks visited at night. Our toilet was a pit dug away from the tent site. Cooking was by open fire with Dutch Ovens, pots, and skillets. I don’t recall how fresh water was stored. 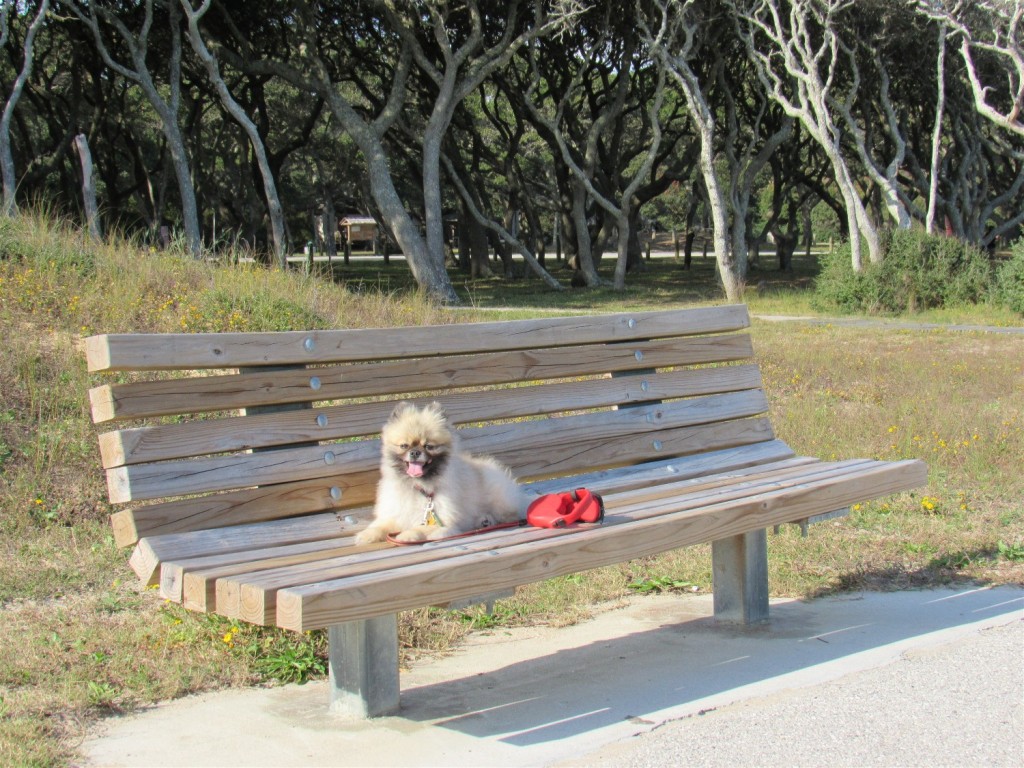 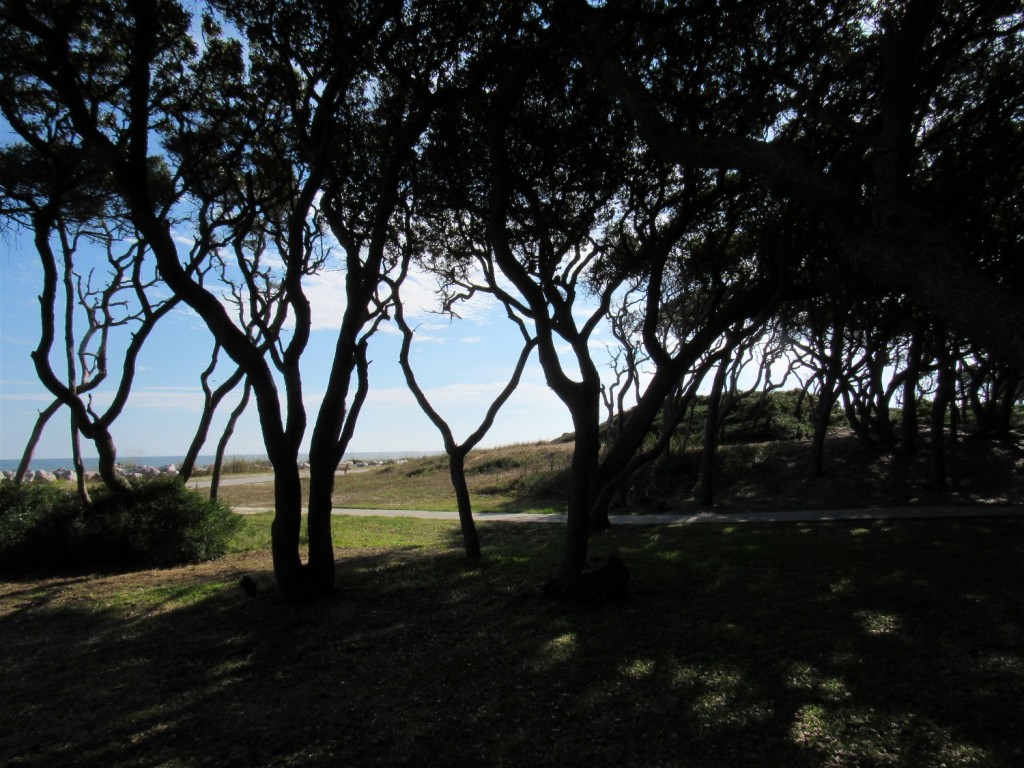 There were no rocks on the beach shore in 1957. Erosion simply ate at the beach to the point that a cliff formed which was head high for a five year old. The rocks are now necessary to prevent erosion from invading the historical site. Rip current signs are now at the place where we so innocently played in the surf. 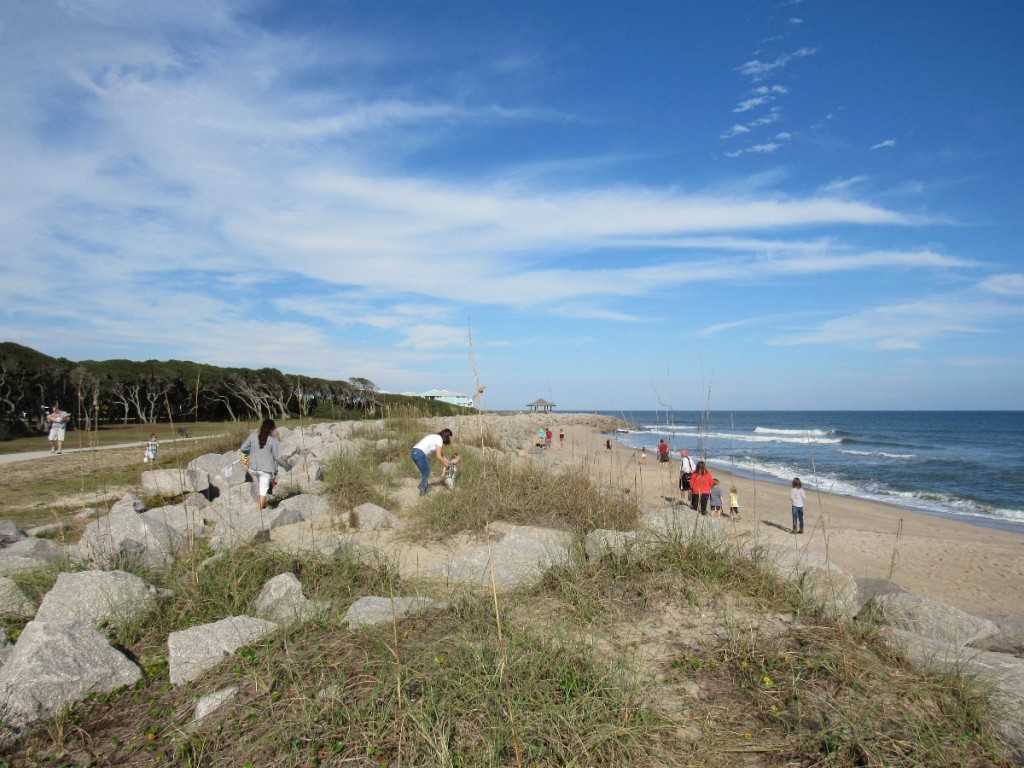 Aunt Helen was the catalyst which got us to visit Robert Harrill the Ft. Fisher Hermit. His World War II vintage concrete bunker home was near the lagoon where we gigged for flounder. Which path we might have used to pay our visit- I have no idea.

Zoey seemed to enjoy the walk. 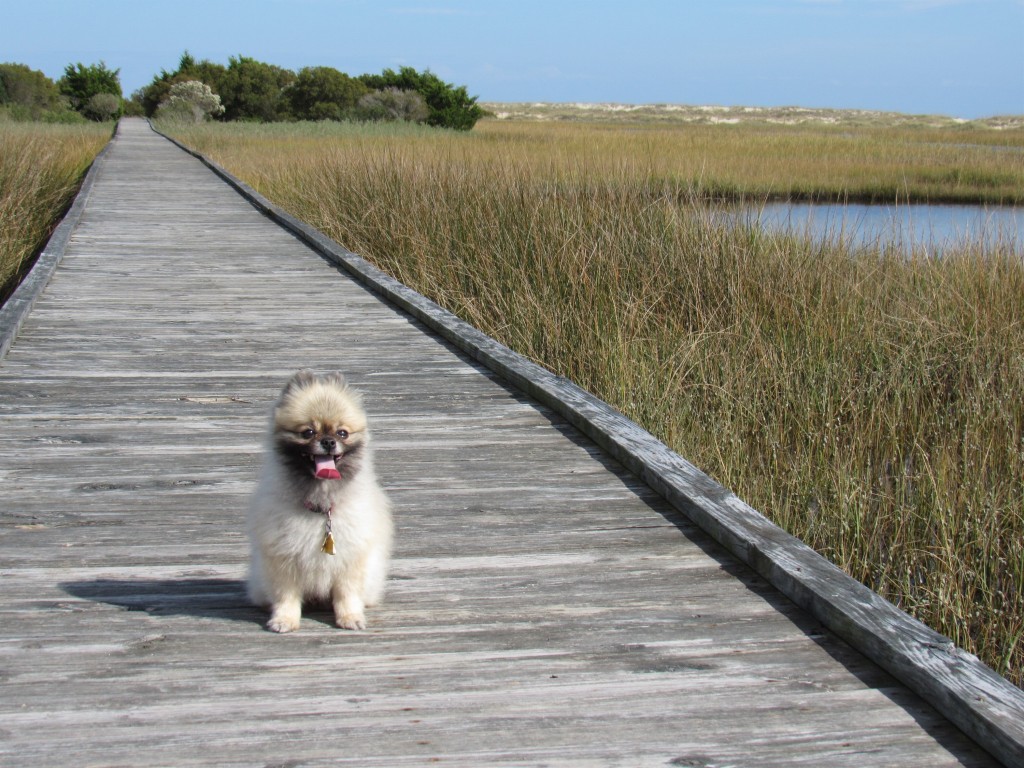 The bunker is still in good shape, though oaks have been allowed to invade where bare dirt once provided a wider yard area. Long taken back by natural vegetation is the Hermit’s garden spot 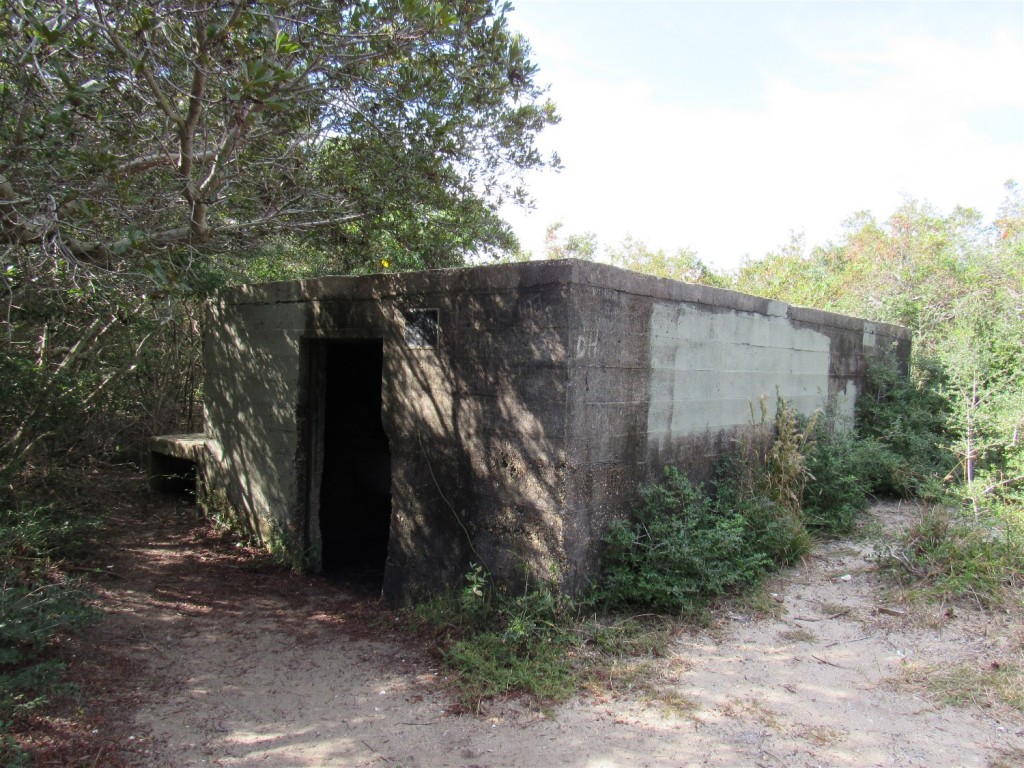 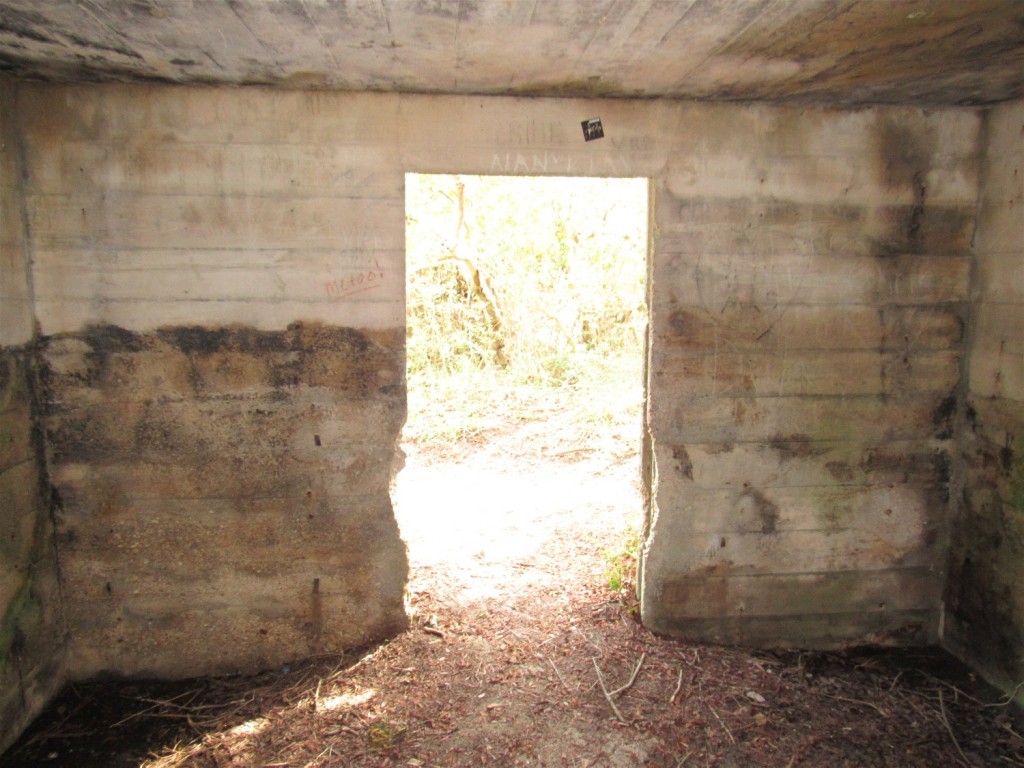 Harrill’s view toward the ocean was tranquil for sure. 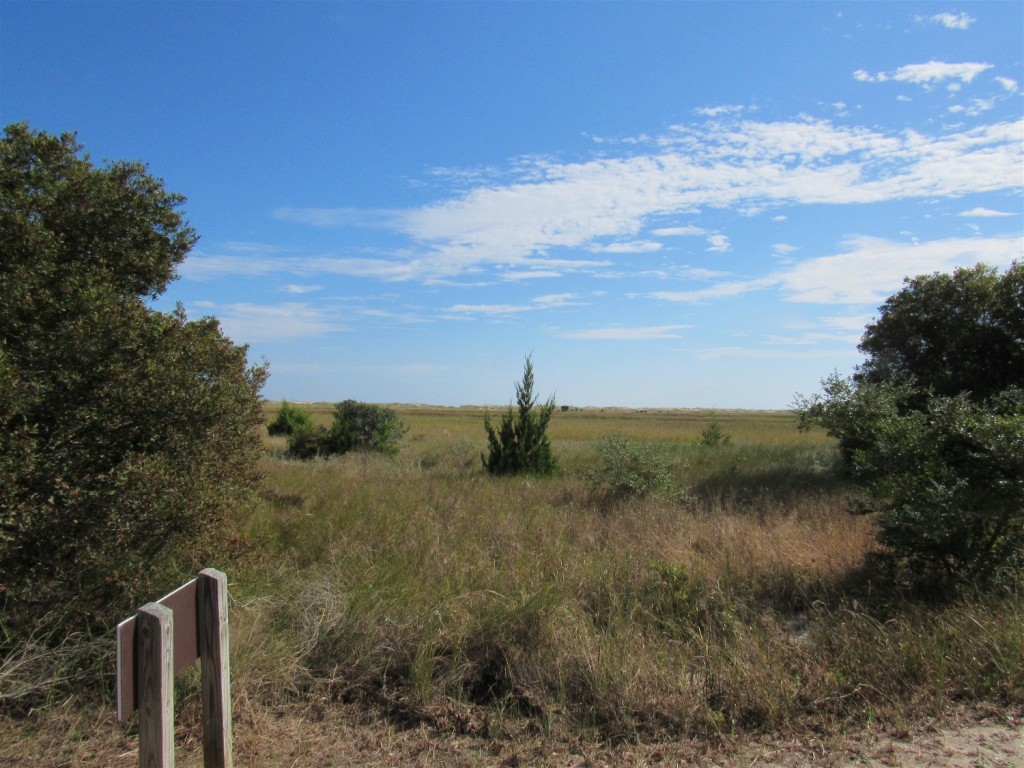 Fiddler Crabs were as evident today as in my childhood. 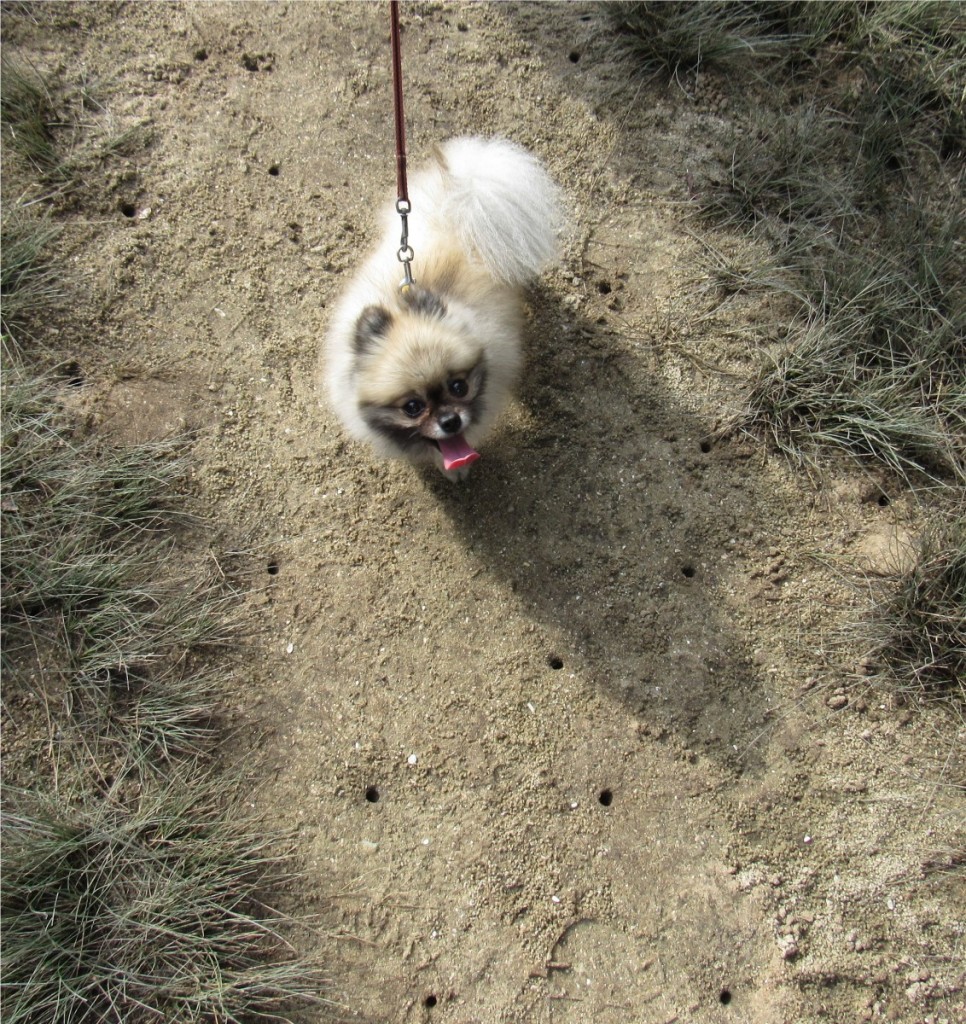 Making a day trip specifically to visit the Ft. Fisher campsite, jetty, lagoon, and hermit’s bunker was for me what some folks call being on a bucket list. Should I visit again, I’d like to spend more time sitting on that bucket than walking………………

https://en.wikipedia.org/wiki/Robert_Harrill is the Wiki link for info about Robert Harrill.

Diann and I took Zoey to Carolina Beach to see the sights.  The Boardwalk is a nice improvement.  Shops were for the most part closed. Zoey enjoyed her walk on the beach. 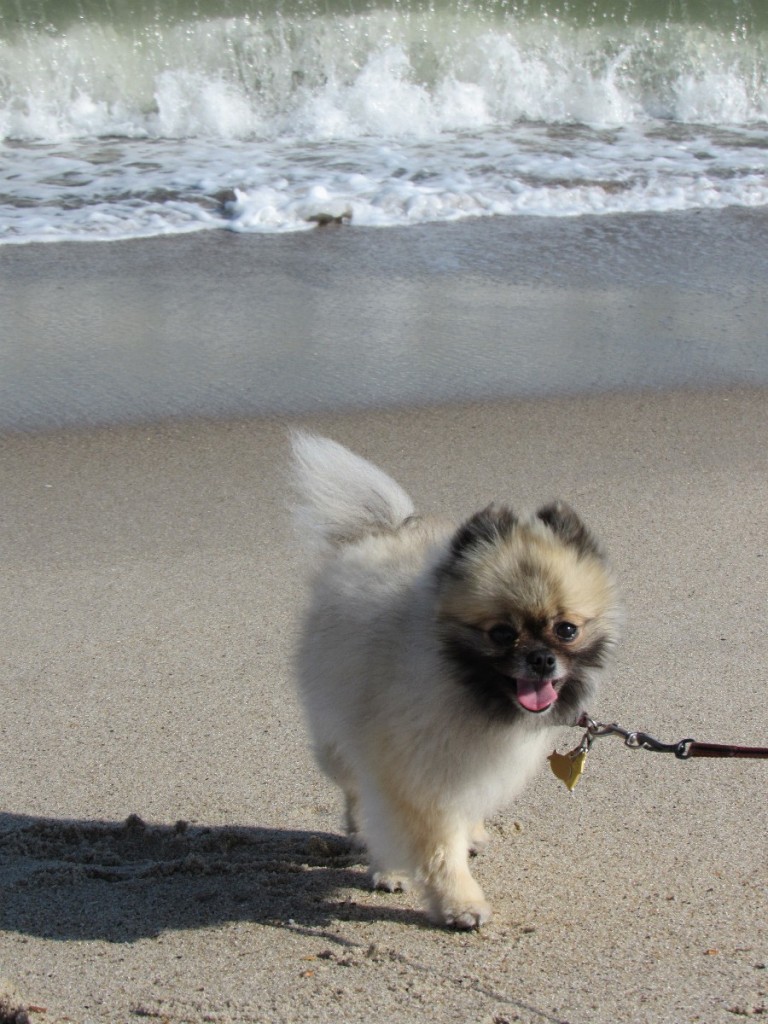 Diann and I got a laugh during the photo op. 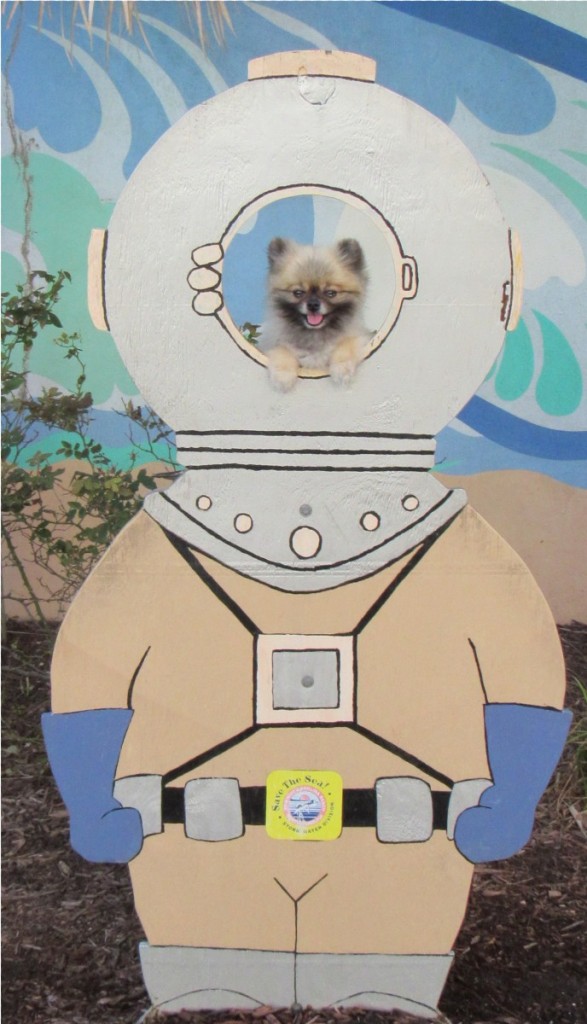 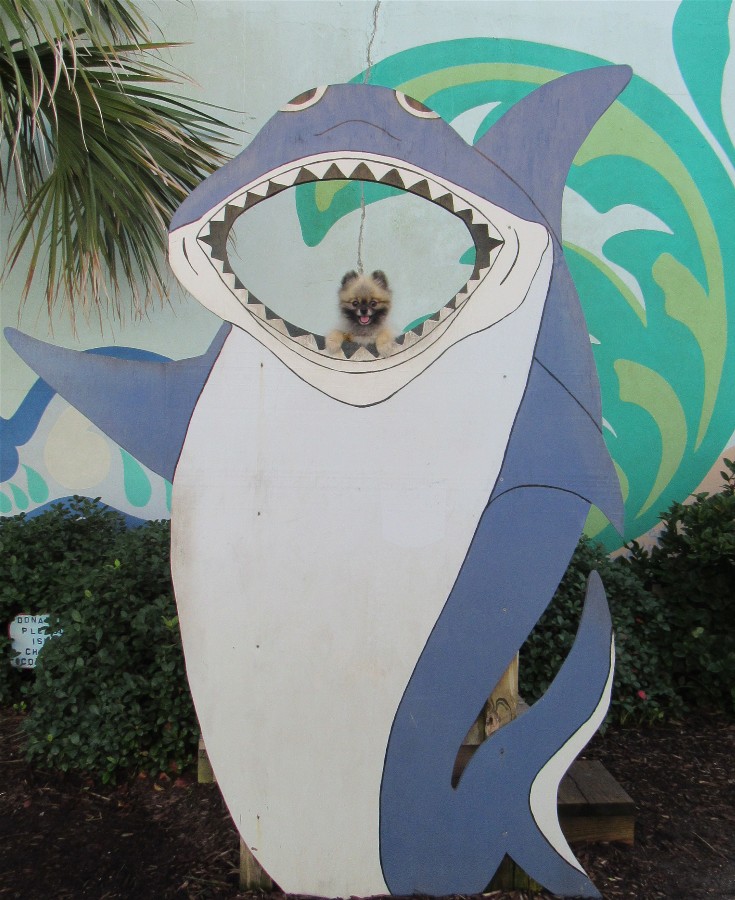