Tour passengers on “Cruise the Neuse” had been remarking on how much value they felt The Chelsea Restaurant offers. It had been a long time since Diann and I had dined there. And, that dining experience had been as part of a Hatteras motor yacht “1510 Rendezvous” dinner. The food had been good, but the banquet experience hadn’t been special.

“What the heck. Let’s splurge,” was how I convinced Diann to eat there last week. In reality the prices were in line with other upscale dining places in New Bern- and less than a couple of others we have tried.

Diann had the New Orleans pasta. The dish’s hot spice didn’t jump out at you. Rather, the portion’s heat became evident as a background to sausage, mushrooms, tomatoes and scallions. 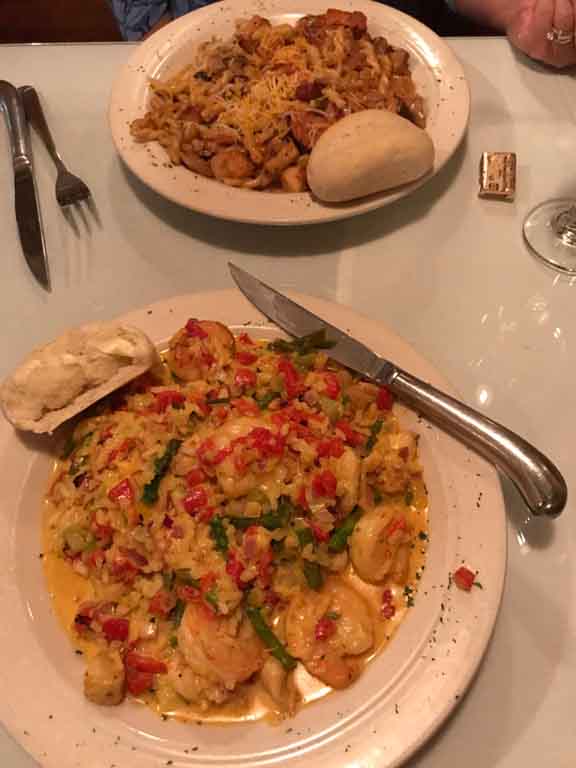 My choice was the Paella Risotto. Where many restaurants have an almost dry rice bedding, Chelsea’s rice bed was moist and creamy. Shrimp, chicken, sausage, asparagus, tomatoes, celery, roasted red pepper, and onions were the primary ingredients.

And yes, we took home a go-box!

The story / blog of Yacht A Fun, a Gemini catamaran sailboat, traveling the ICW and east coast with insights to the extended cruising life. Chelsea New Bern