Back in January 2013 Diann and I weaned ourselves from television shows. I was so weaned that when I watched sit-coms while on visits- the laugh tracks drove me bonkers.

Why do listeners need to hear a laugh track to know when punch lines are funny? Can’t the comedy be written well enough to be spontaneously funny to the viewer?

But, living this summer at Deep Point Marina in Southport we’ve been influenced by boat neighbors asking if we’ve seen “such and such” episode of whatever. Their conversations pushed us over the side to get a cheap TV with built in DVD player. Previously we watched Netflix and movie disks on my 2007 “big screen” Toshiba laptop. 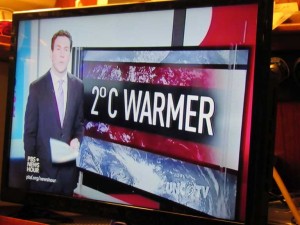 As of yesterday, our Gemini sailing catamaran is now hooked to Time Warner cable and a 24” TV. Once we are traveling in the spring, I’ll have to get a digital antenna-for sure.

Now that I’ve had a couple of days to watch, I can say that broadcasts haven’t changed much since 2012. Breaking News continues to be “breaking news” for hours. Laugh tracks still take up about a third of the air time of comedy shows. Leaving a TV on, while concentrating on more productive efforts, just leaves a drone of voices in the background.

But, TV does offer a break from other activity. A good movie can be fun. And, cable is included in our slip rent. Life is good!

POST SCRIPT-   watching the news in the morning while having that first cup of coffee makes the broadcast experience complete.