Diann and I topped off our 60 gallons of water for our Gemini catamaran sailboat and topped off the fuel as well. At 10AM on Monday, the 1st, we exited Dinner Key. For six hours we sailed without having to tack. (I love this coastal sailing.) But we did have to dodge crab pots! For three days of travel, we dodged hundreds of crab pots.

Monday night, we anchored at Pumpkin Key which is at the northern end of Key Largo. We were close enough to the airport to watch planes land. 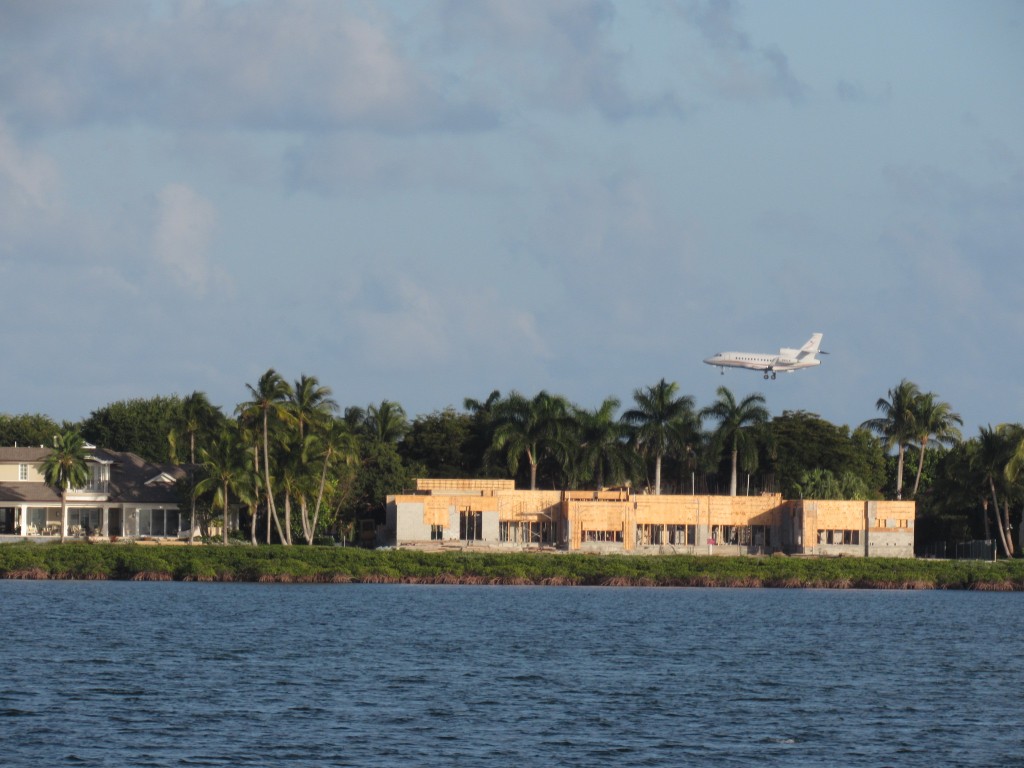 Tuesday we started out at 7:30AM, but due to the amount of narrow channels we motored all day. Somewhere along the way we hit something that was not a crab pot. (After arrival in Marathon I could see that our prop has a bent propeller.) 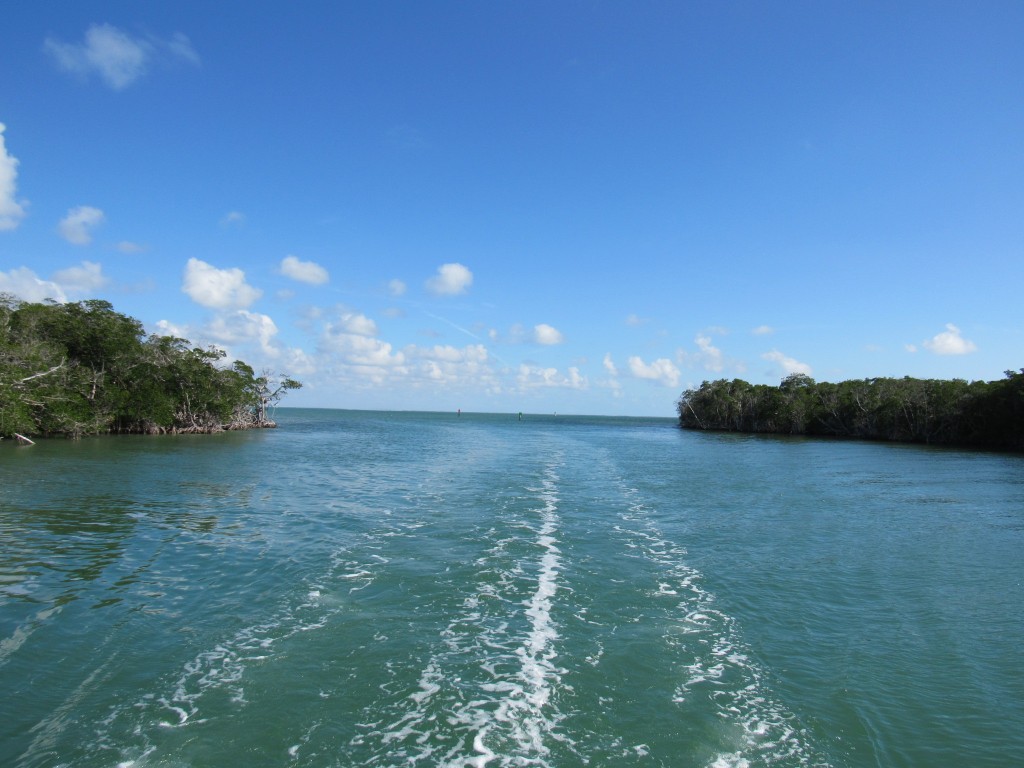 looking back to Jewfish creek entry at Key Largo 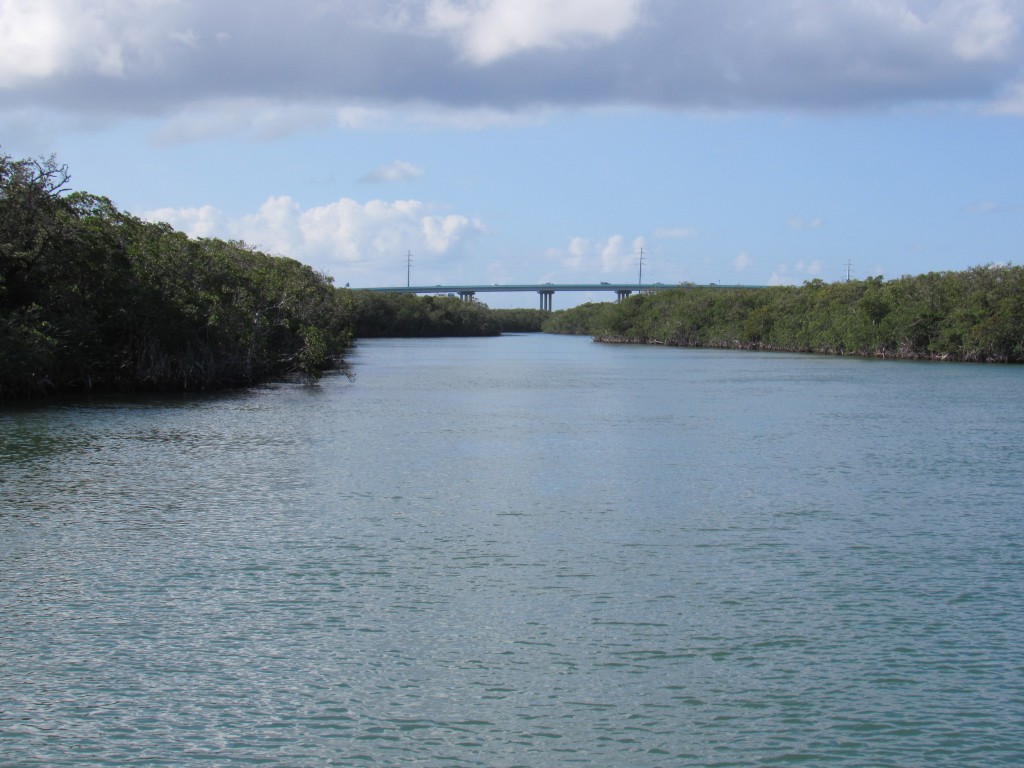 The Bridge at Gilbert’s Resort is in the distance 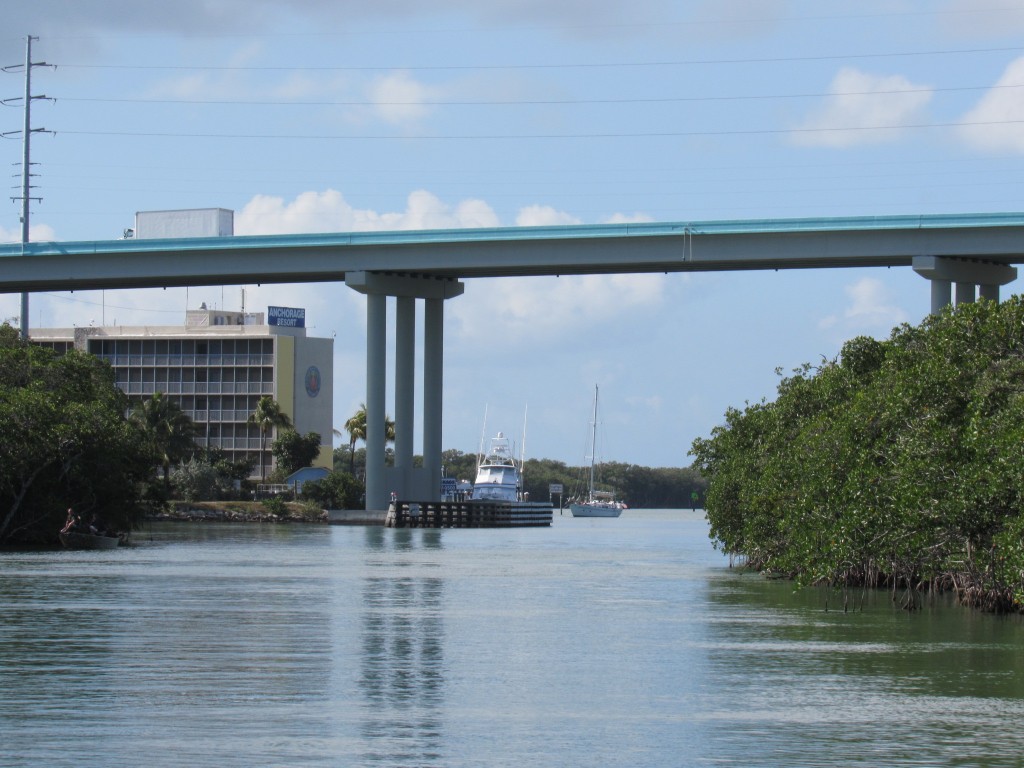 Getting closer to Gilbert’s 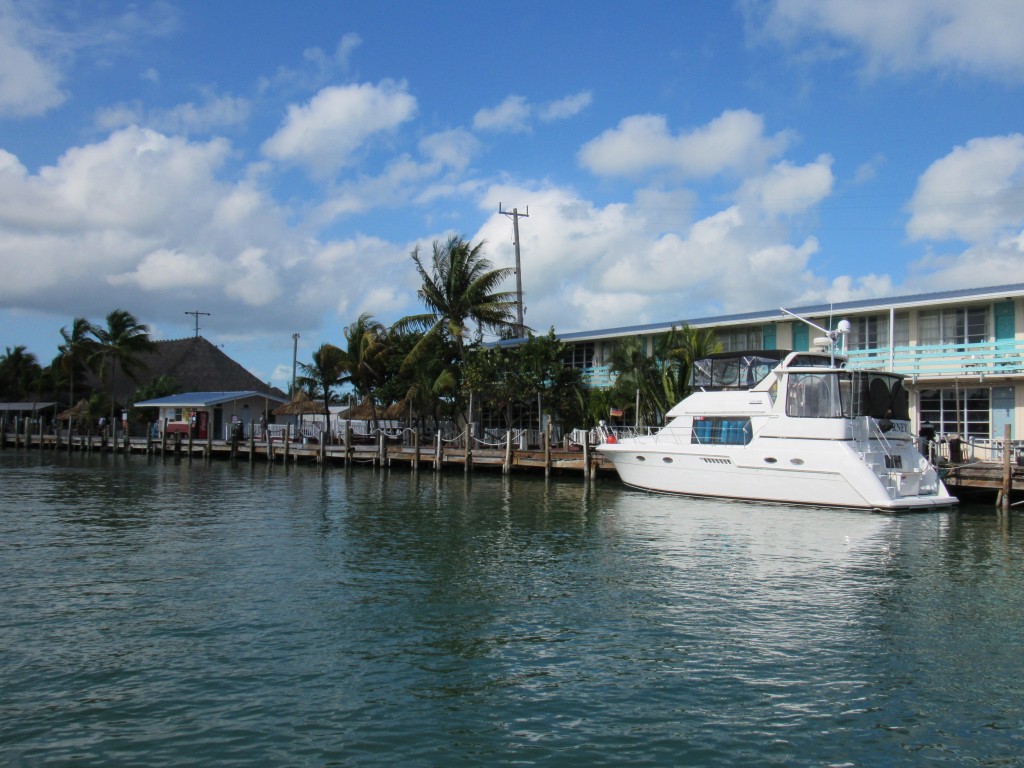 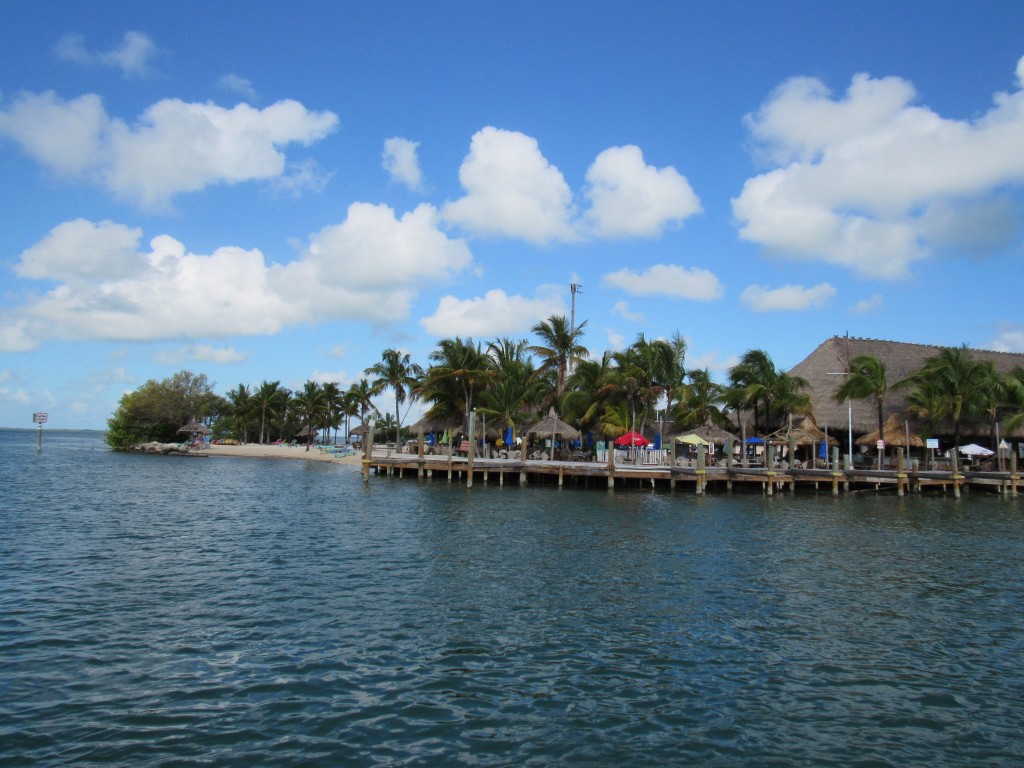 Tiki Bar, Motel rooms, and a beach- at Gilbert’s

Our view included this boat that ran aground and looked to have been abandoned. 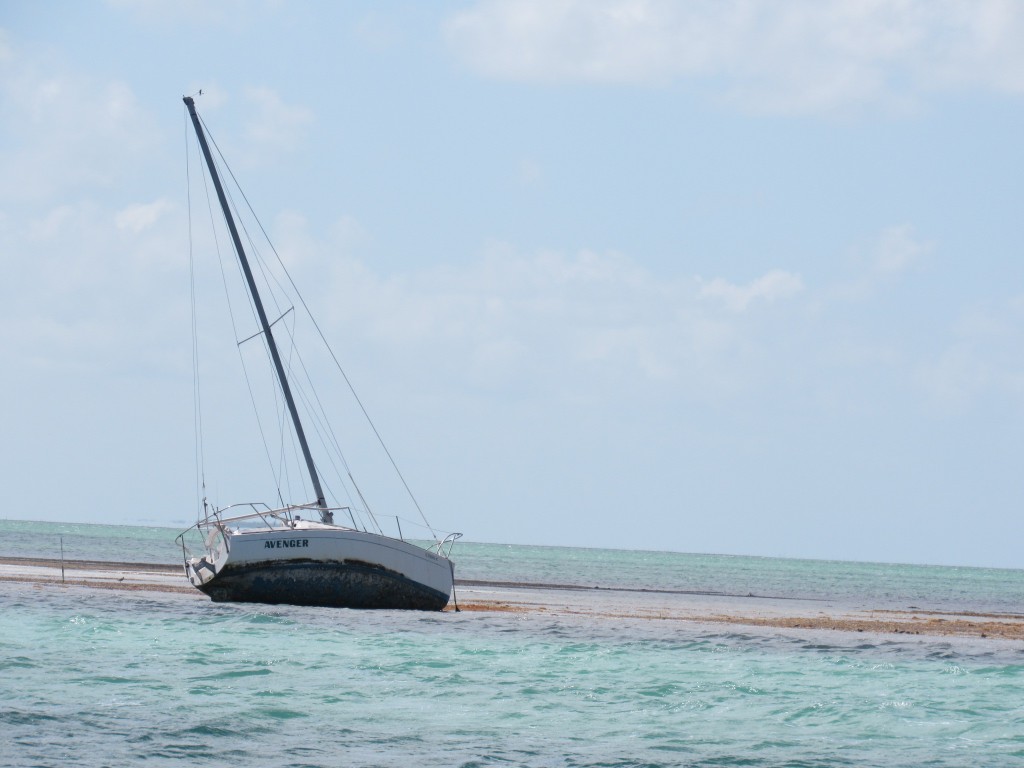 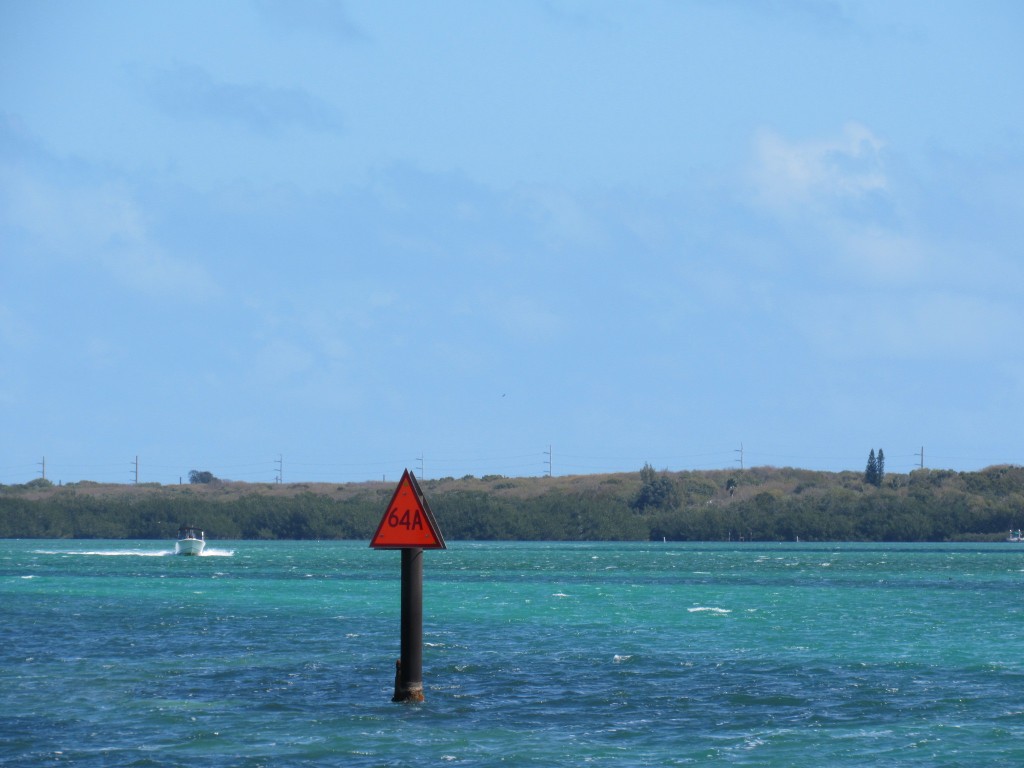 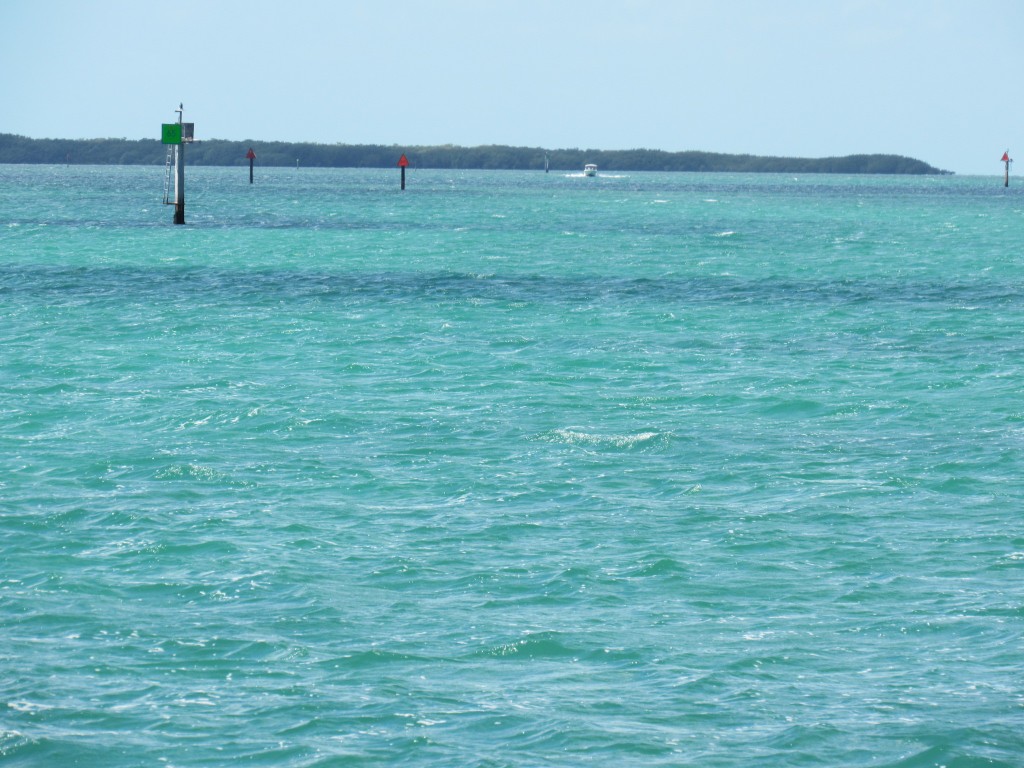 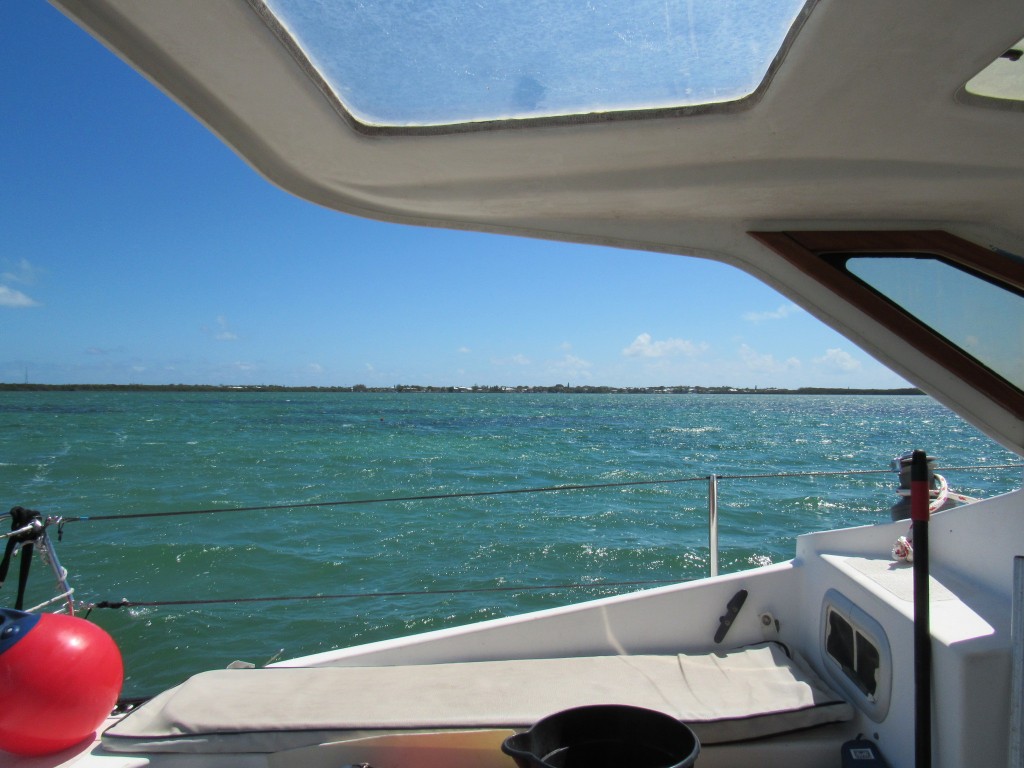 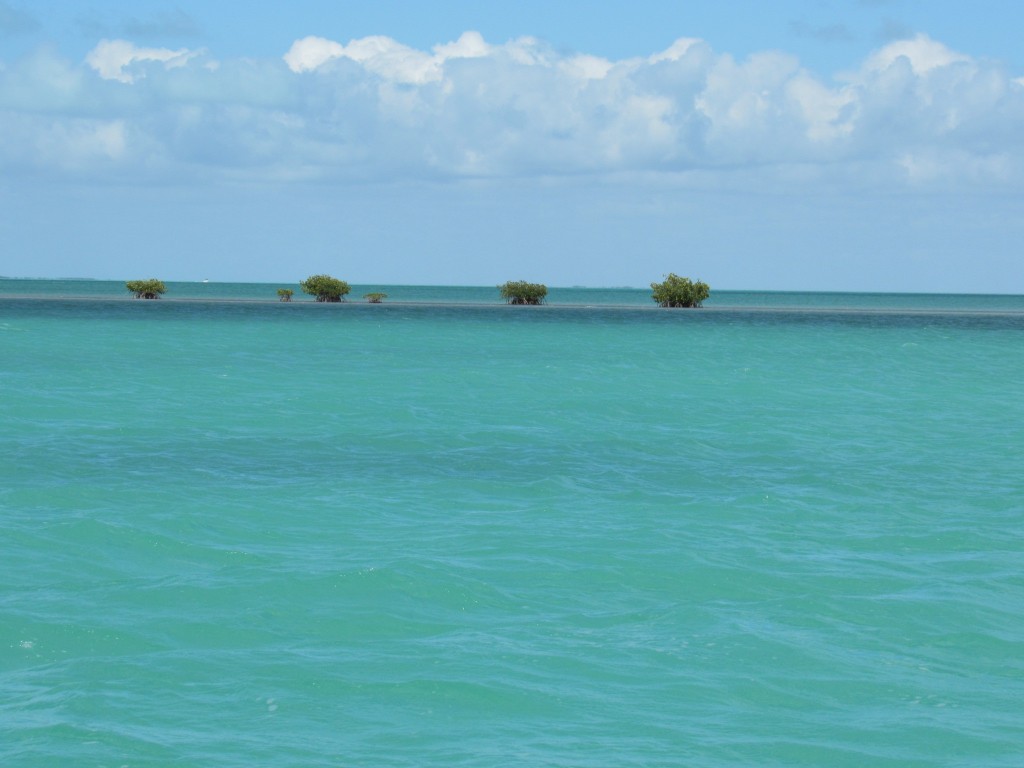 Too tired to go another hour, or so, we decided to anchor in a protected spot at Lower Matecumbe Key. The “cove” is called Matecumbe Bight. It’s close to Channel Five- which is an opening to the Atlantic Ocean’s Hawks Channel. 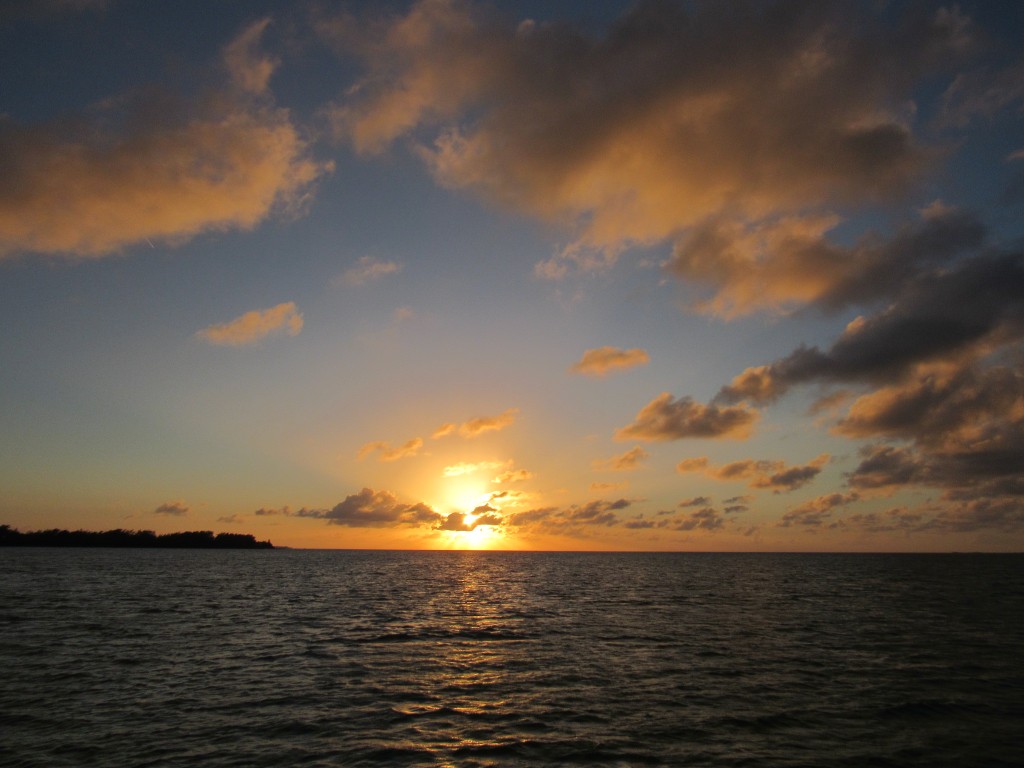 The weather forecast changed for Wednesday morning. NOAA advised winds to be in the 22MPH range until noon. Bay waters would be choppy as a result. So, at 7AM we decided to stay at anchor.

How nice. No crab pots to drive me crazy Wednesday. Yacht A Fun gently responded to small wavelets and the wind skirted over the boat due to our being on the leeward side of the Key.

The time was used productively. First off, I stopped drinking my second cup of coffee and went back to bed. What a nap. It lasted until 11AM.

Then I opened the laptop and finalized this weekend’s Hickory Daily Record real estate feature for a client REALTOR. Afterward I followed up with HDR staff and then set about reviewing the MLS data and images for the March 14th feature. While writing I finished that second cup of coffee- at room temperature.

We could have pressed our luck instead of heeding the NOAA “small craft advisory” . We could have put a reef in the sails and banged into choppy water for four hours as the winds reduced back down to 17 MPH from 22. But why? By staying put we are able to both relax, and get some work done.

Thursday we found the weather to not be encouraging for going offshore into Hawk’s Channel, so we set sail along the bay. We sailed all the way from Channel Five to Marathon. That saved some fuel! 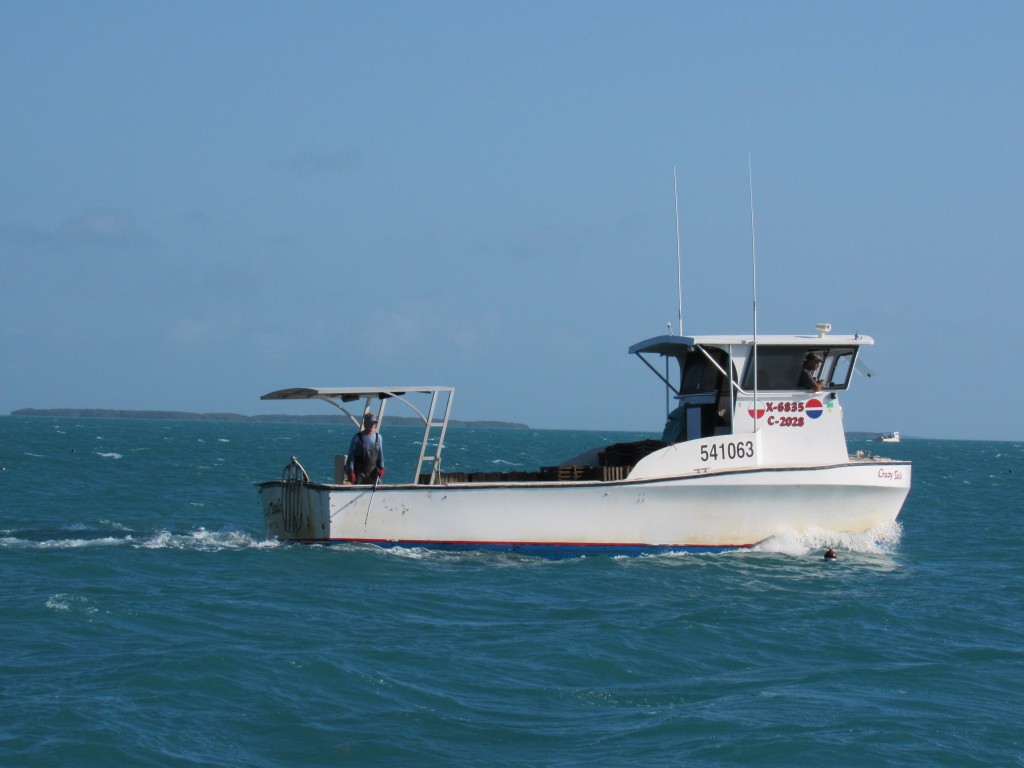 Multiple crab boats pulled the bouys and cages up; emptied; and rebaited he traps 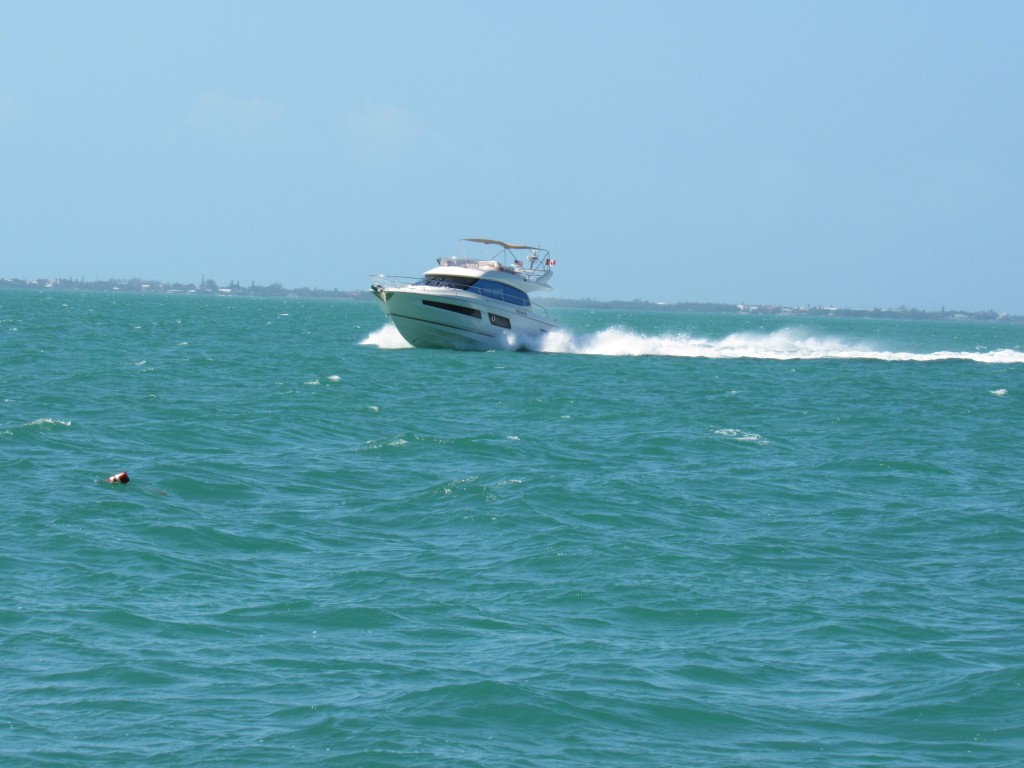 Having called in to the Marathon City Marina, we were able to get our holding tank pumped out in coordination with filling out forms and paying fees for the use of the dingy dock, showers, and a parking spot for our Jeep. Then we motored around Boot Key for TWO HOURS to find a suitable spot to await an assignment to a mooring ball. Our # on the waiting list- 25 !!

By comparison, Vero Beach has a raft up system when their City mooring is overloaded. Marathon needs to do something similar given the density of anchored boats awaiting a mooring.

Friday night was TOGA Night at a friend’s yacht club. Diann and I dressed the part and watched the flag lowering ceremony and our friend, Al Fairaizl, conduct a boat naming ceremony before the “Animal House” event began. 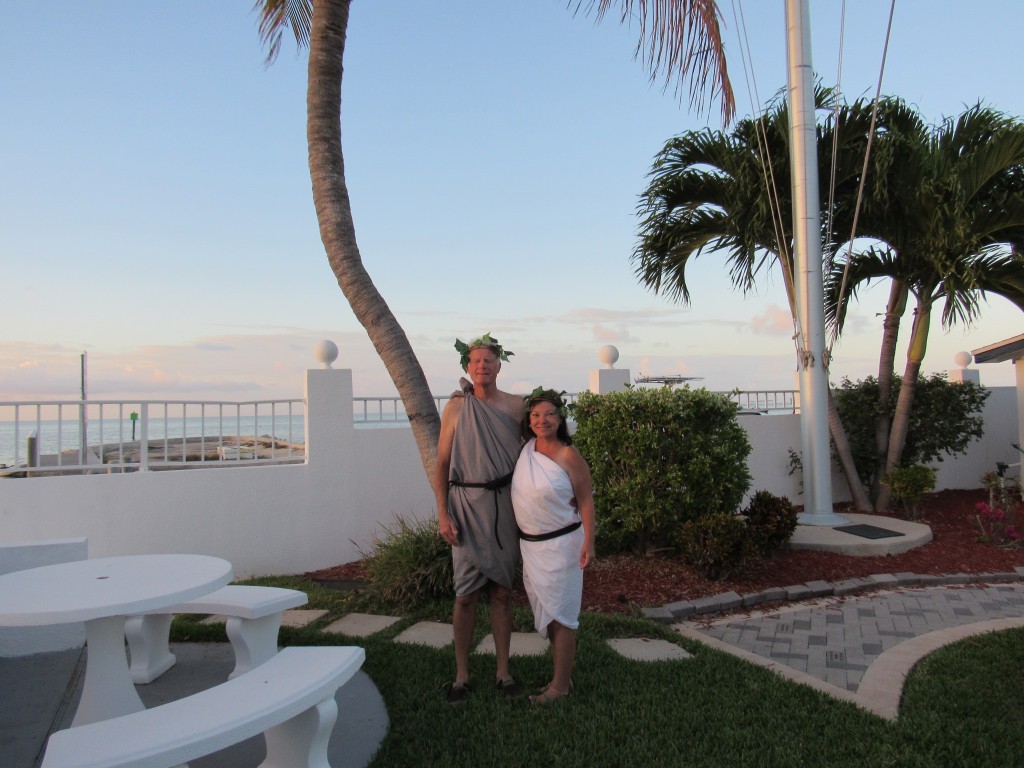 Diann and Alex in home made togas 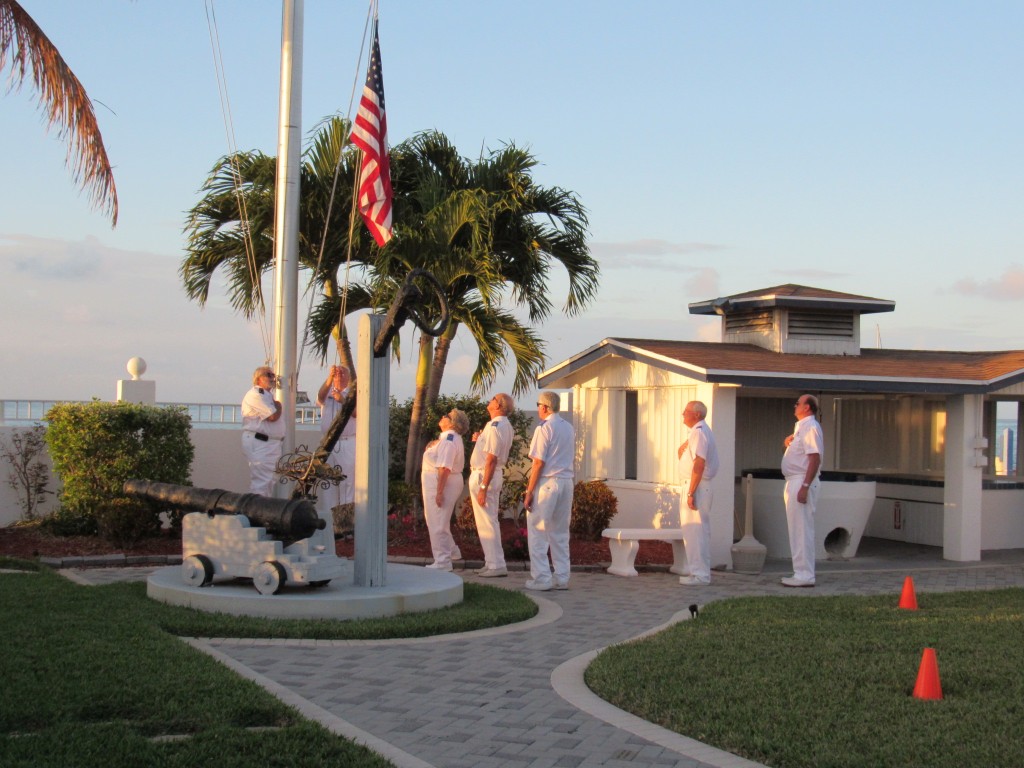 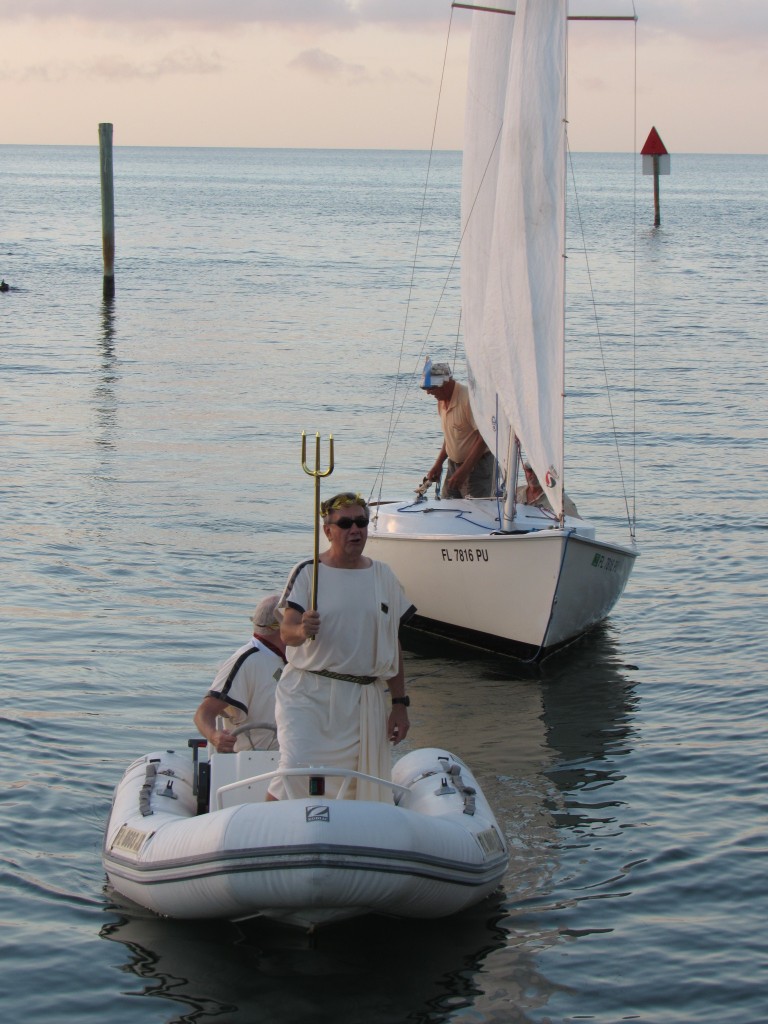 A local Blues Brothers band played. They were good. 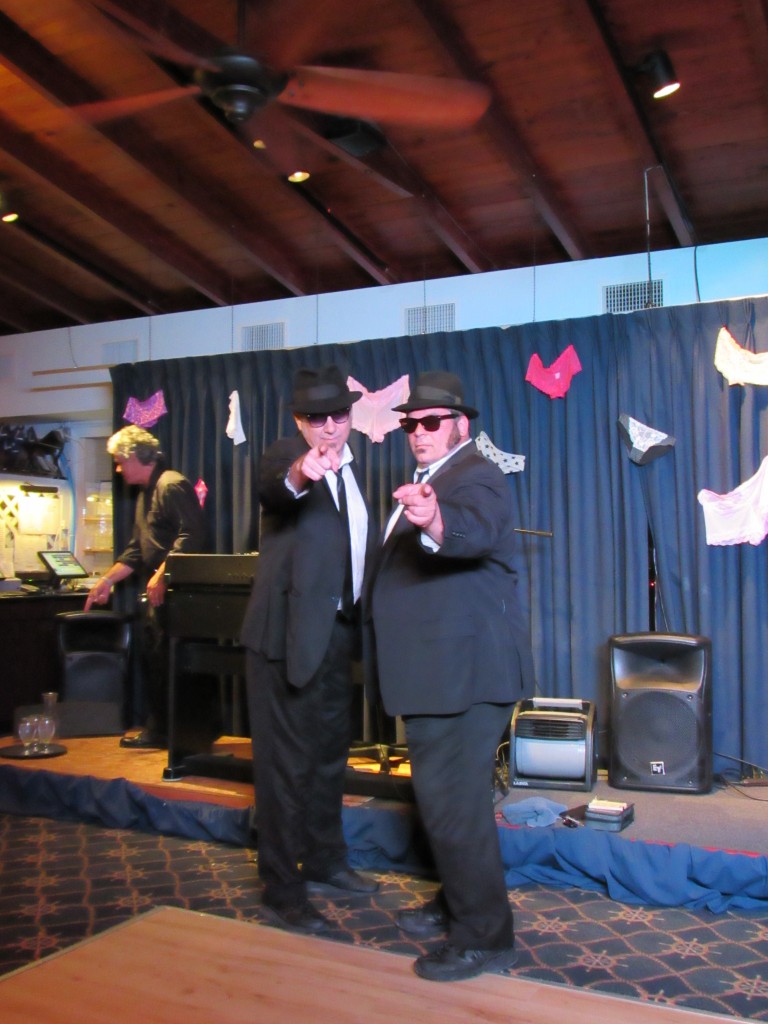 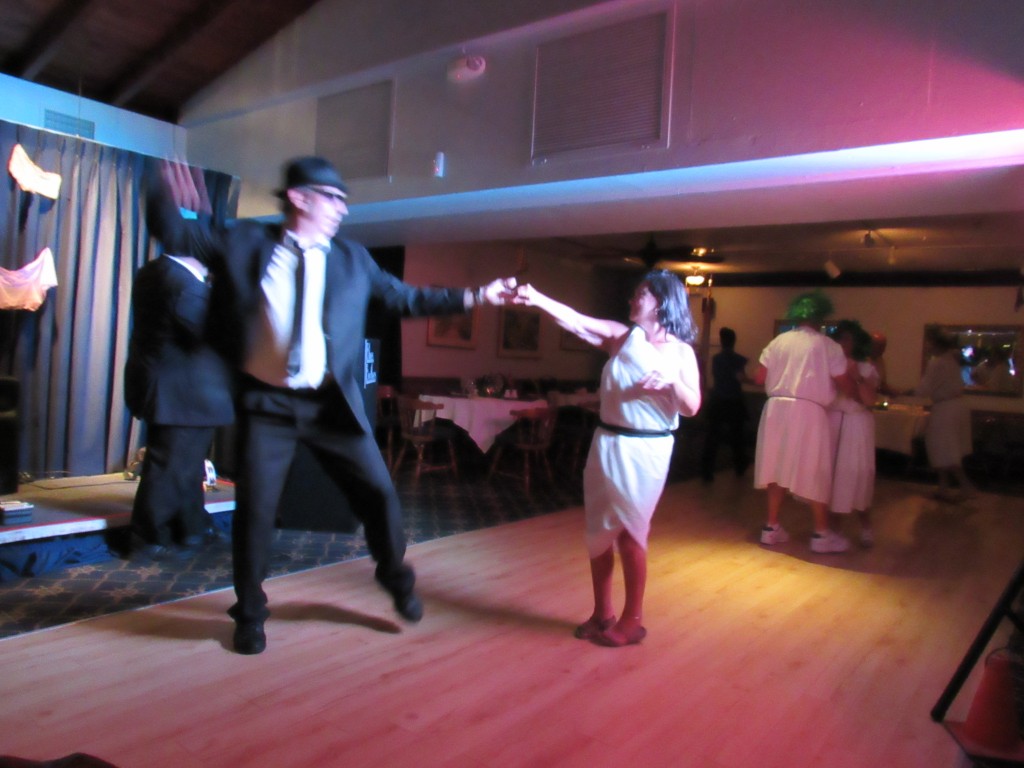 Saturday the 7th was dedicated to getting parts for the mounting of the new solar panel; doing laundry; getting a propane tank filled; and getting a bit of groceries.