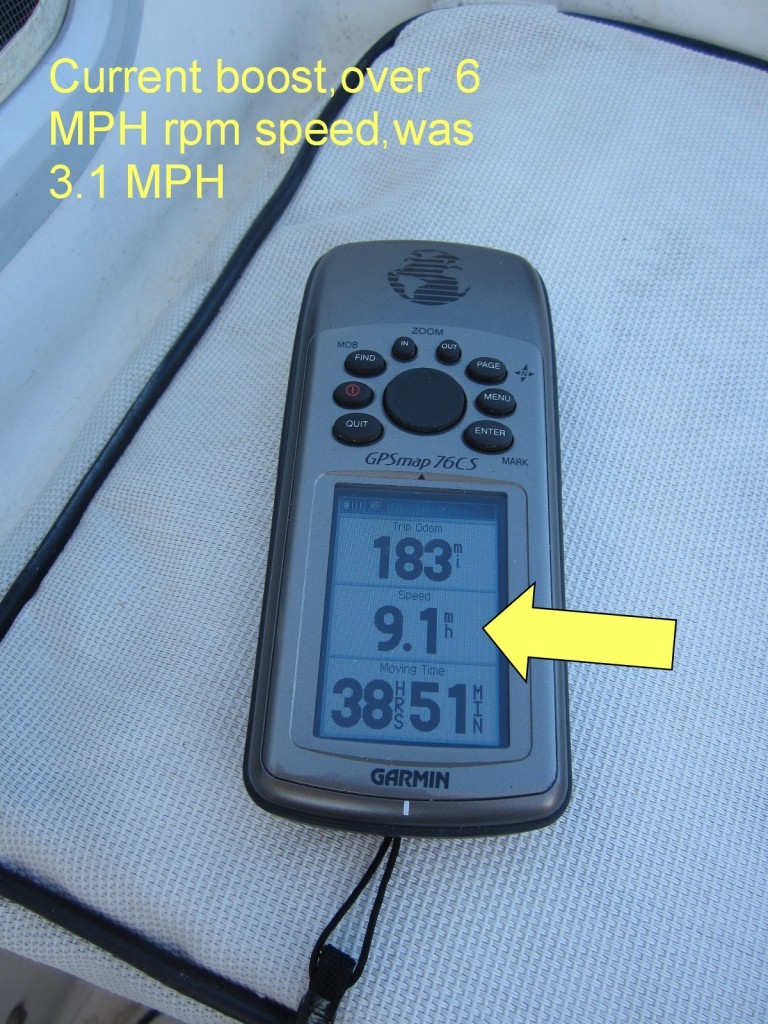 Engine rpms should have yielded 6mph- we were doing 9.1

We made St Simon’s with no trouble, though the bridges added to my confusion as we worked our way to the split where the old and new ICW channels divide.

Staff at the MorningStar Marina were very helpful when we arrived at sundown. Tied up, we were ready for a rest. Diann suggested we dine out at the facility location. Dinner was very good. Sorry, no photos.

Fog set in on Wednesday morning. It was so bad we chilled for the day. We borrowed the courtesy car and went to CVS, Wells Fargo, and Winn Dixie. Afterward Diann spent three hours in the laundry.   I activated iNavX chart software on Diann’s iPad.  It’s almost like a full charting system- at 1/10th the cost.  Here’s a sample showing my position at the laundry… 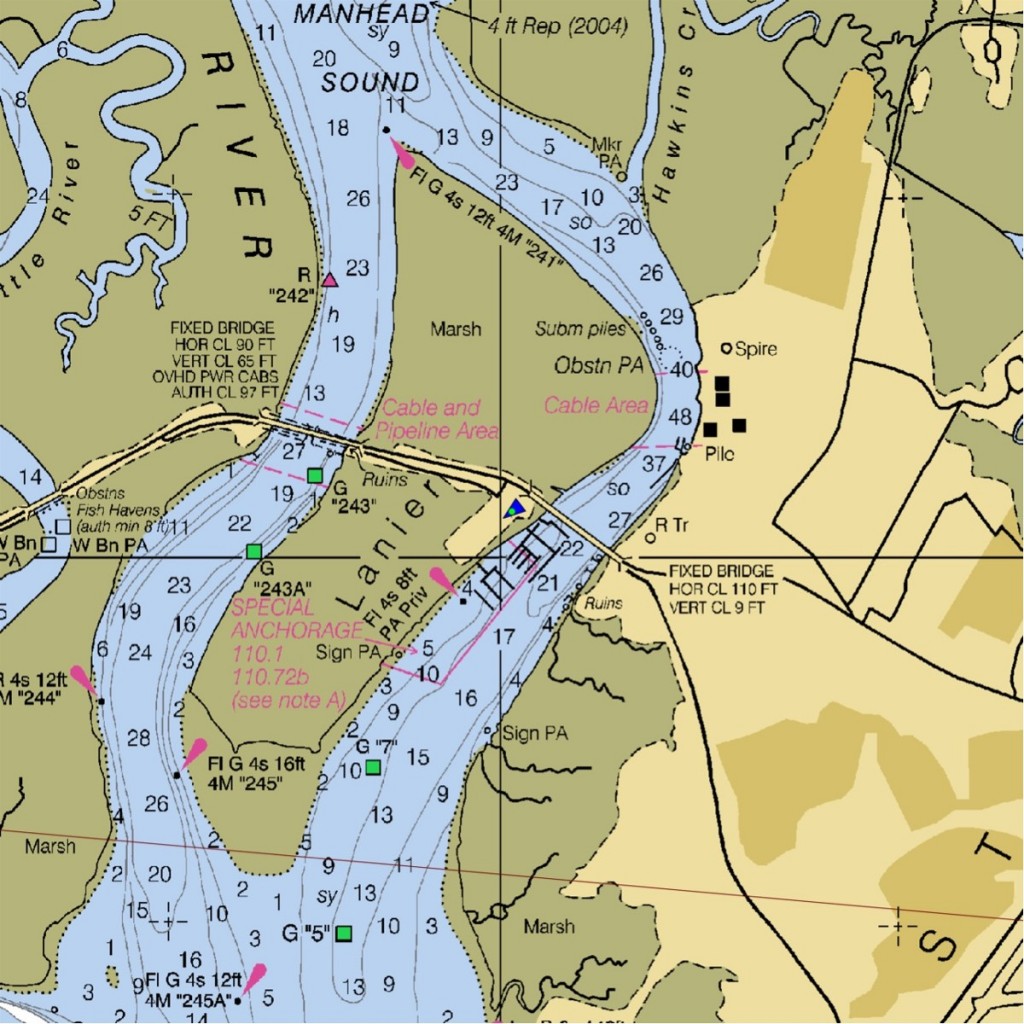 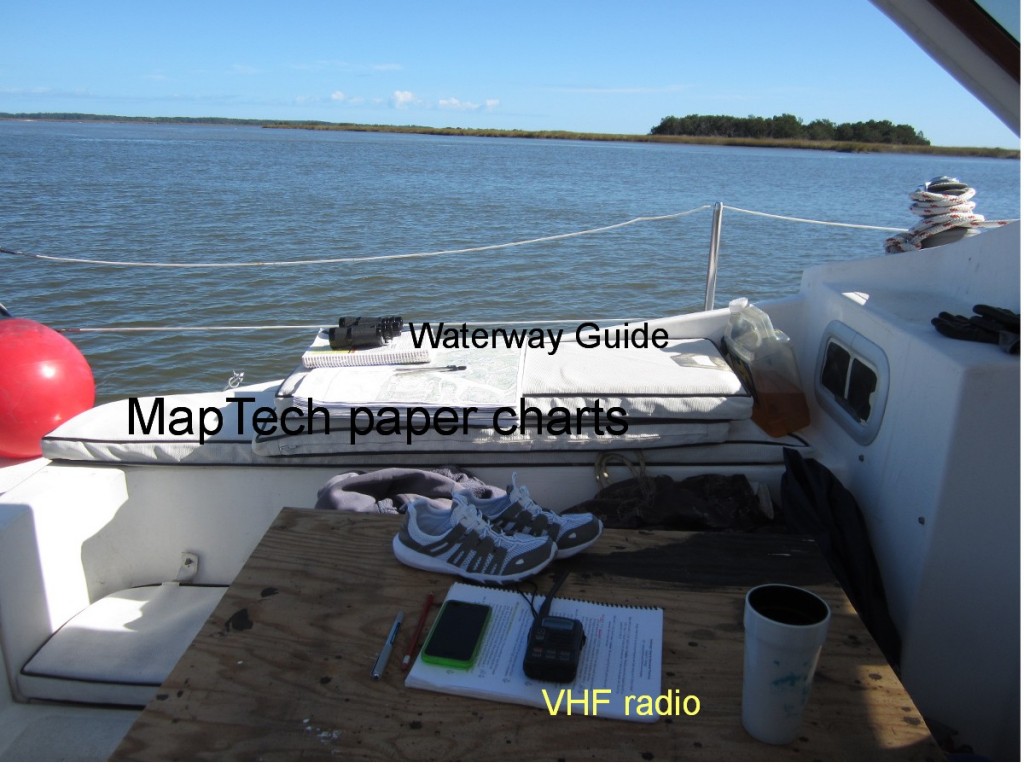 We met a number of boat-folks and discussed boat life in general.

One lady had been in the area 2 ½ years. Though she and her husband had left Michigan on their sailboat and were planning to head further south, his health issues got in the way. He was at the hospital in Jacksonville that day. (Life is short. Enjoy it while you can.) She voiced the hope that they could make it to the Keys by summer.

Last night we tried out the oven. 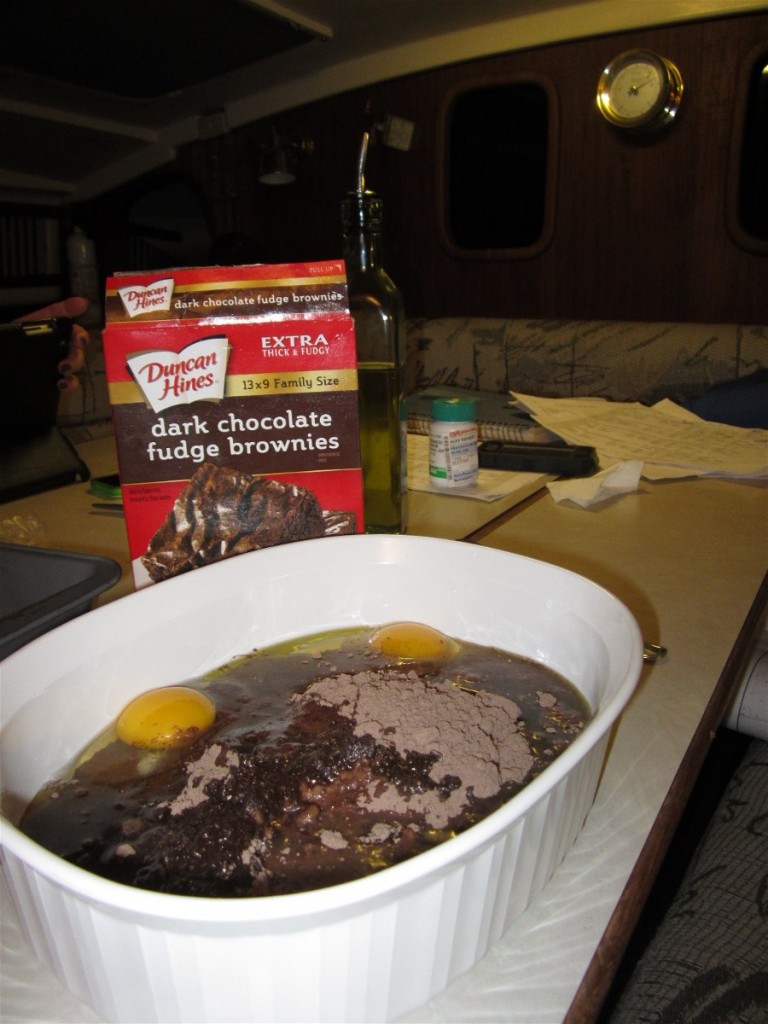 Before leaving this morning we again pumped out our Gemini catamaran’s 24 gallon holding tank. Then we filled it with water until the red warning light came on. Our Elegance electric toilet has a holding tank fullness alarm which was glued on by Ken at Deaton Yacht Services. The instructions said “put it at 90%”. By using a five gallon bucket and timing the hose flow until the bucket was full, I was able to use a calculation based on 5 gallons in 45 seconds. Fortunately Ken attached the sending unit at 68% of full. When the light goes red, we still have 7 to eight gallons more to add before having to be pumped out. Good to know. We can now judge how many days we have left before having to be pumped out.

The photo of thatch is of current driven sea grass that had piled up so dense, at Yacht A Fun’s rear, that I couldn’t move the boat this morning without first pulling the thatch away with a boat hook and directing it around the port side of the boat. 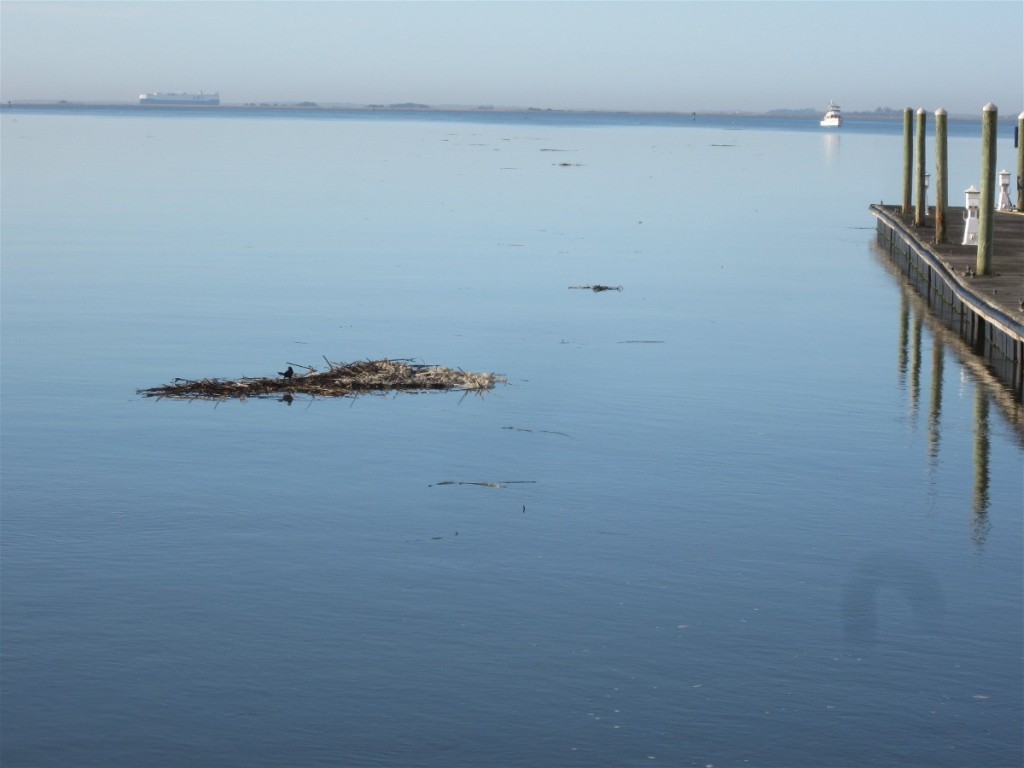 There was so much that I moved at least seven masses which had caught up on the two rudders and drive leg.

Leaving St. Simon’s at 10AM was set to coincide with arriving at the entrance to St. Andrew Sound at slack-tide. Having no current mitigates the wind’s effect on the water. The calculation was on target and we had zero chop as a result. Seeing breaking waves in the inlet though was a bit disconcerting. 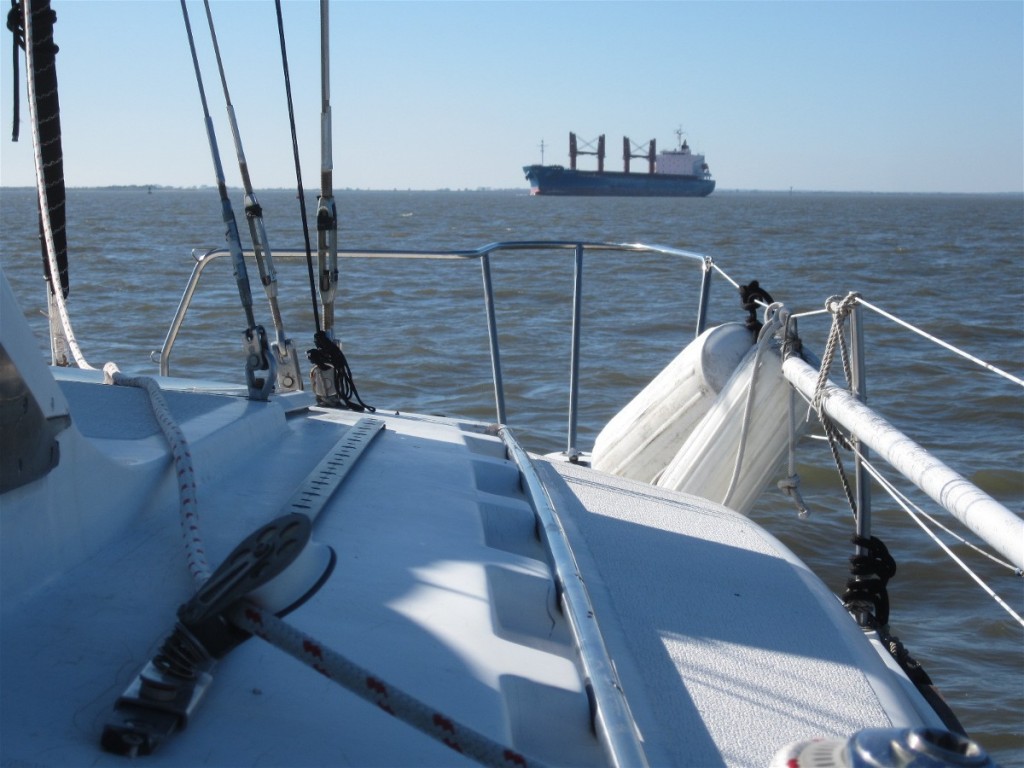 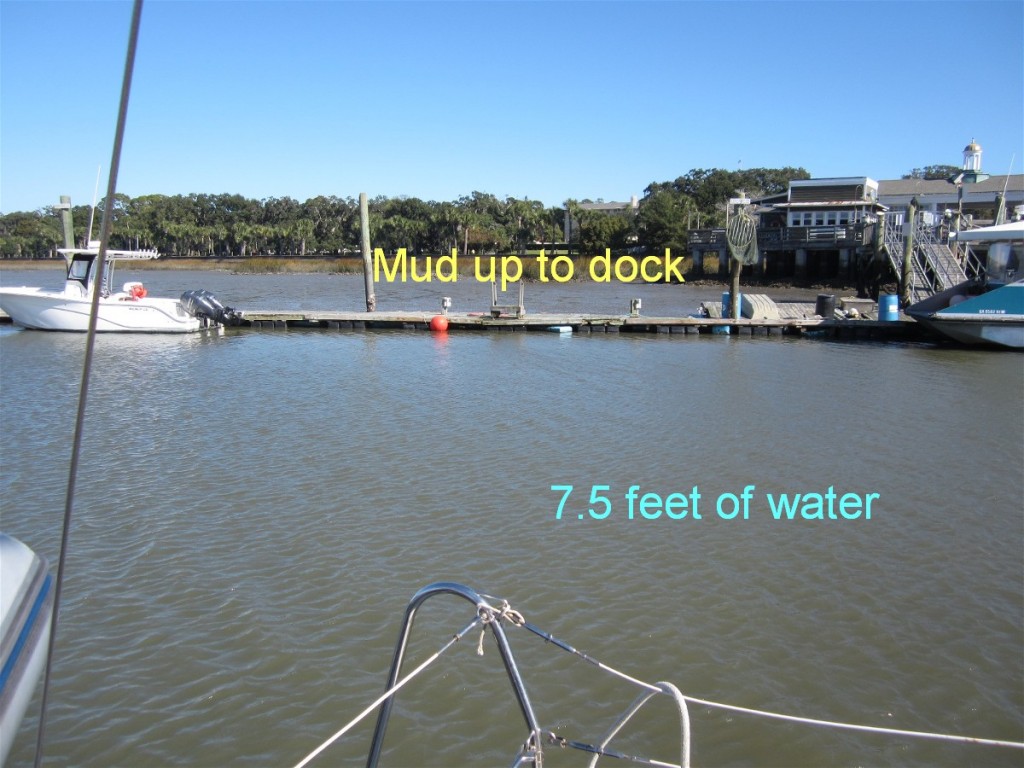 Jekyll Creek near the new bridge 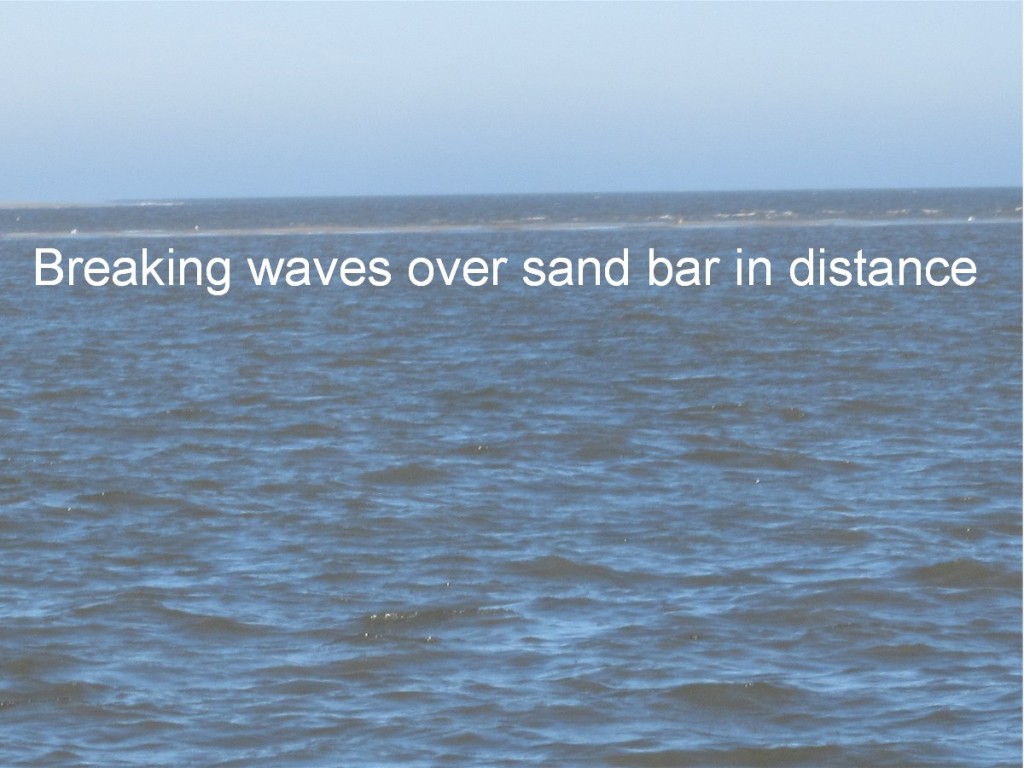 Breaking Waves in the distance 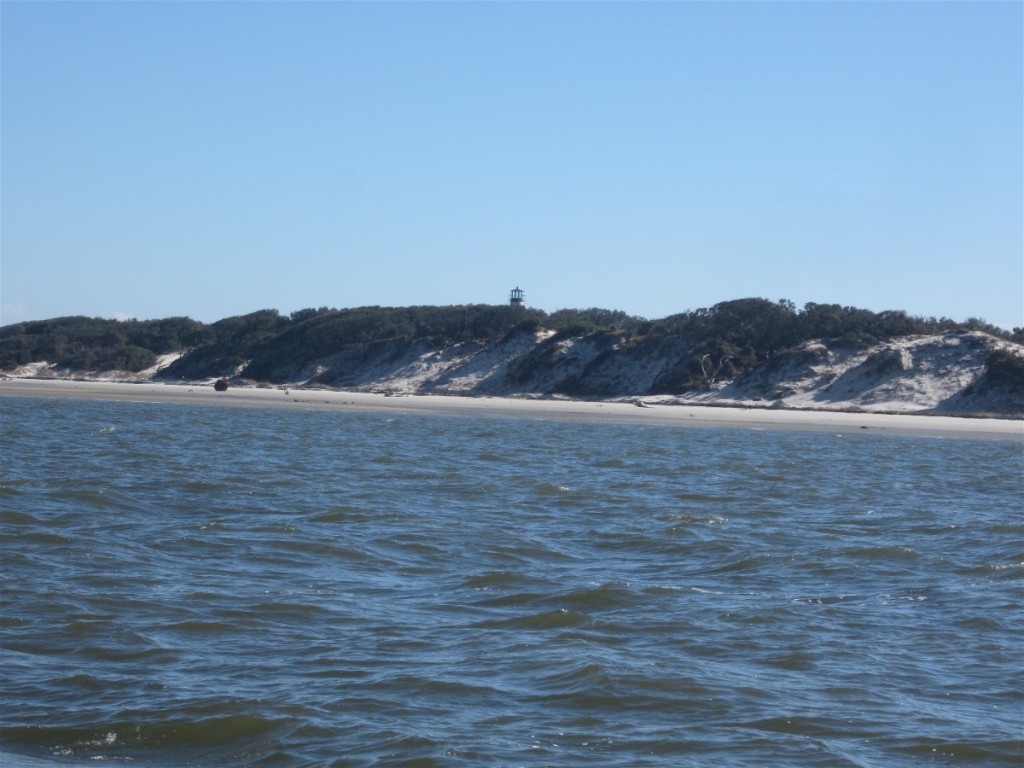 Cumberland Island just in from the inlet 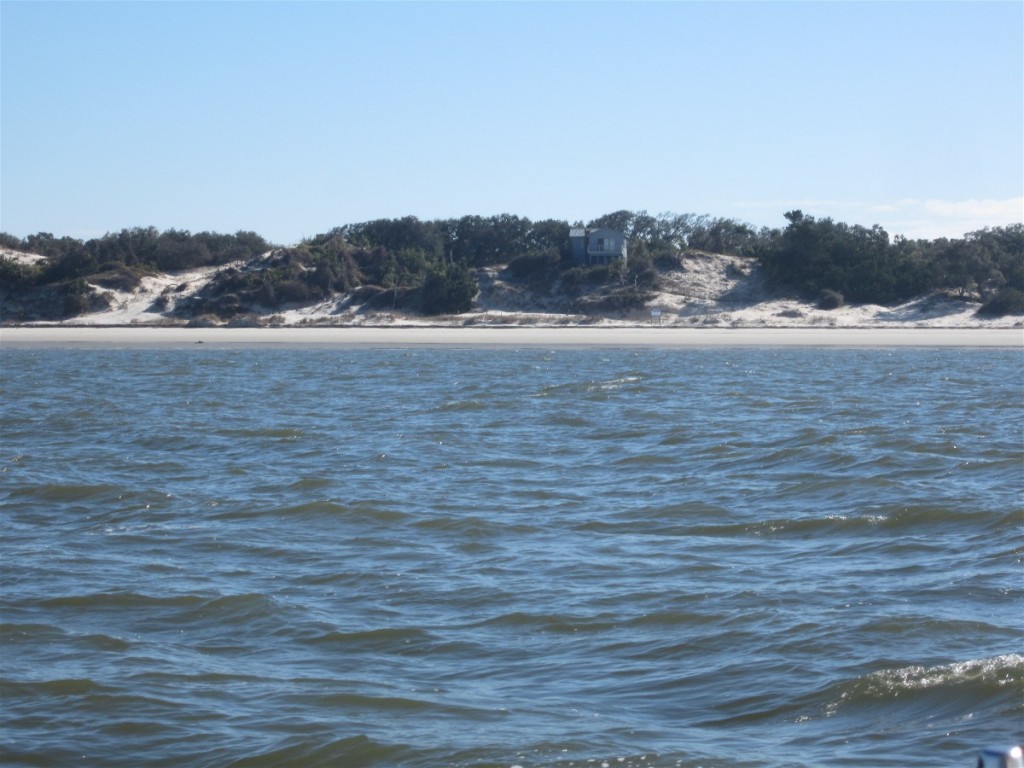 Cumberland Island beyond the point

It would have been fun to have made Fernandina Beach today (only twelve more miles). But darkness would have caught us had we tried to make the stretch.

We anchored in sight of the Naval Base at King’s Bay. Taps could be heard at sunset. 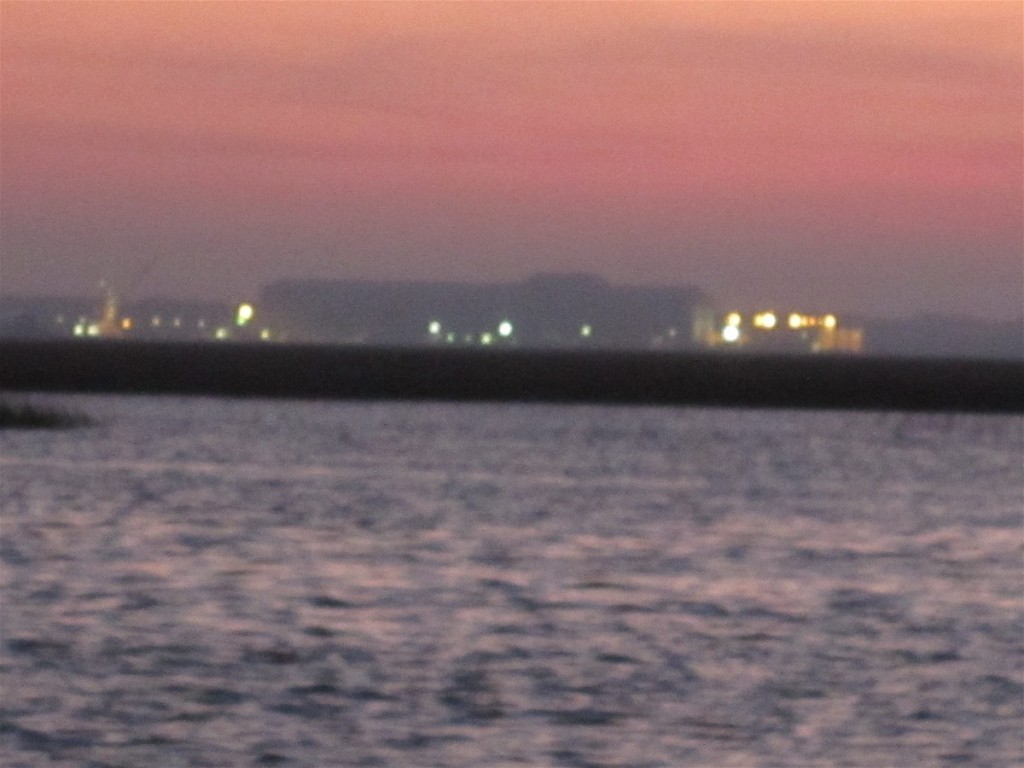 View of Navy Base from Crooked River

The anchorage at Crooked River is rolly due to inconsiderate small sized fishing boaters.

It is close enough to Fernandina though, that we may make it by 10AM.

Spending a day there will be fun. Our plan is to catch a mooring ball. The moorings give us access to the dingy dock and hot showers. Plus the marina is close to the downtown. Perhaps I’ll have a pint of ice cream from Fred’s market.

New lesson learned during anchoring today. Nylon rode (on a second anchor dropped to run from the rear of the boat to the bow) does not sink fast enough, or far enough down, to escape the propeller if you let it run out in the middle of the catamaran instead of the side. The line didn’t get cut, but it did bog down the engine.

We’ll adjust how we set a second anchor from now on. Dropping back (from the first anchor) on the current and then motoring forward to set the second hook will have to be modified.

Tonight we are having grilled pork ribs.