Back last week, I had a sinus issue which seemed to have cleared out- and then got worse just to keep me humble. Diann picked it up, too. It’s a cold that has been working its way thru the boat yard community here at Deaton’s Marine in Oriental NC.

Having a business that is based on a Gemini catamaran sailboat, doesn’t make feeling sick any less yucky than being sick in a house. Except, in this case we still have cosmetic stuff we’re pushing to do.

Diann hasn’t been hit quite as hard as I have. There’s been a couple of days when I’ve gotten up, worked a while, and gone back to bed, until getting back up to do a bit more. One evening I went to bed around 7:30PM- and slept right on into the following morning.

Diann’s main thrust this week has been making our side windows clear. The Lexan had clouded from salt and sun. After much research she set upon wet-sanding the plastic and then using compounding paste to remove the 3000 grit sanding marks. Darn, they sure look clear to me! 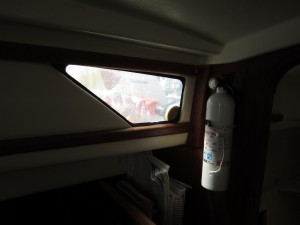 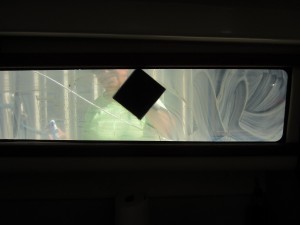 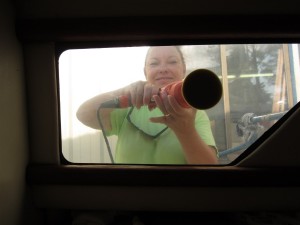 My primary effort has been to work on the cockpit door, and the four sets of interior folding doors. To do the task, and not have door faces touching, I added short posts to my wooden saw horse set. Two days of sanding, two days of teak oil application, and two days of polyurethane later- they look pretty good. 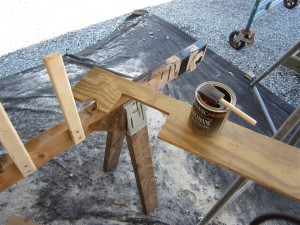 A quart of poly went a long way 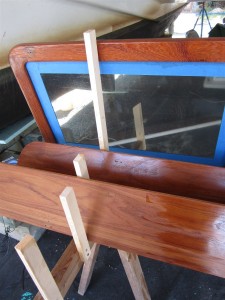 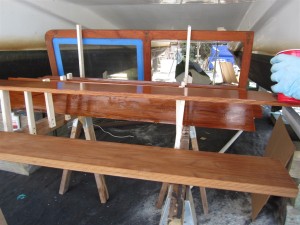 The under boat “garage” made a great work place

Yacht A Fun’s logo lettering went on without a problem.  We positioned the graphic to avoid fender abrasion. 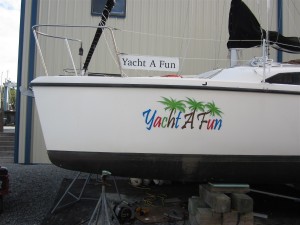 In the mix of things we’ve maintained our meal variety. 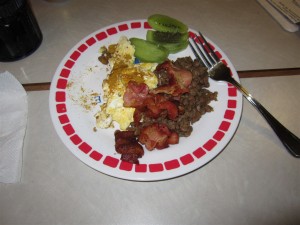 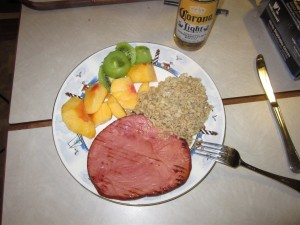 In addition to blogging, this morning, I’ve written my weekly real estate feature for the Hickory Daily Record. The series morphed to being an advertorial and is beginning its 19th year.