While roaches on a boat are definitely a nuisance, mice are damage instigators!   Diann was sitting on the port side of our settee. From the corner of her eye she thought she saw a grey brown blur run under the port berth’s door.

But- later, nature called and while Diann was in the head she could look straight down the port hull to the berth door.   “Alex”, she called. “We have a MOUSE!”

I had days earlier noticed a partial roll of paper towels in my tool bag which was in our pantry.   The end of the roll had been shaved as if abraded by rough sand paper.   Having never had a mouse on our Gemini catamaran, I had discounted a mouse as the cause. (Torn by tools, perhaps?)

Mice chew electric wire coverings to sharpen their teeth.   They defecate; chew food bags; and make nests to give birth to multiple offspring.   That mouse had shaved off the paper towel!   The paper must have been used to fluff a nest. 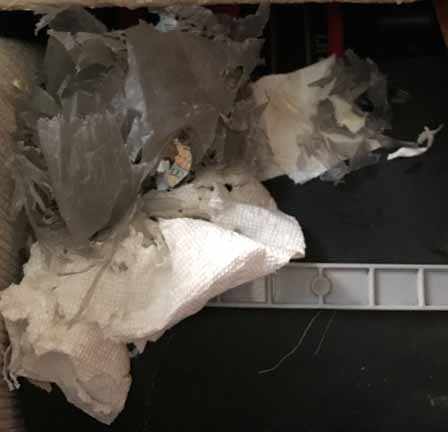 We use a piece of rubber roofing as a shield for the top of our house bank. That rubber covers the wires and post caps.

Immediately, upon Diann calling out about a mouse, I went to a Dollar Store and bought four wooden traps.   Traps that would be set for the mouse’s evening wanderings.

There’s more to the story though.   It involves more mouse evidence which was seen while heating dinner.

Two nights earlier we had been to Los Fogones Peruvian Restaurant in Goldsboro, NC.
The food is so good, it has become our destination restaurant if passing by Goldsboro during an evening.   On that most recent visit, I had brought back left over: spiced roasted chicken; rice with corn; and deep fat cooked Yucca Fries.   The chicken went into our refrigerator.   Our pantry (the repurposed starboard berth) is cold enough during the winter to acceptably use to store cooked rice and Yucca for a short period.

Dinner, on mouse night, was to have included reheated Peruvian food. However, the mouse had nibbled on the Styrofoam container of rice and fries which had been placed in our pantry.   The lid was still closed and so I initially thought he had simply nibbled the joining edges of the food box. Horror of horrors- it had squeezed into the food box, eaten the center of a fry or two and had left rice sized poop beside the scoop of left over rice. Thank goodness I inspected the food instead of just dumping it beside the chicken that was already heating in a frying pan!

The mouse traps were set after dinner.   On two I used peanut butter. On one I used a small chunk of cheese.   And on the one that smashed the mouse’s head- I’d zip tied a chunk of Yucca Fry. Poetic I’d say……………….. 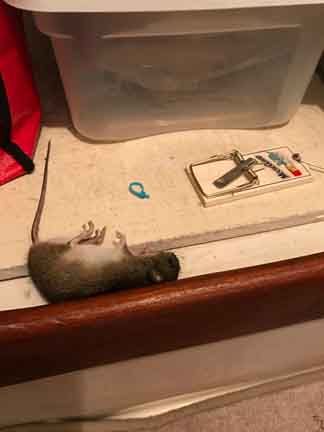 As a back note: I stop and rescue worms from hot sidewalks.   If a cricket gets on our catamaran, I catch it and release it.   So, I felt sad for the mouse. But relieved that it only took one night to catch it.

A week later, Diann found the nest.   It was on top of a pair of house batteries in the port side nav station locker.   My guess is that the batteries get slightly warm as the solar panel charges them.   So the mouse had a warm place to raise babies.   Thankfully no wiring had been chewed.

The most logical entry point for the mouse was probably one of the lower air scoops which provide cooling air for the Dometic refrigerator.   The scoops provide ready access to the gap between the upper and lower bridge-decks.   If screen wire mesh is used to secure the entry there are two problems which would result.   First off the air flow would be reduced- not good during summer.   Secondly, since a screen would be penetrated by the rubber propane hose which connects to our Mr. Heater propane “fireplace” , a mouse would try to enter by eating away the rubber hose.

So, being unable to secure the entry point, I set two traps within the area of the scoops.   A future Mr. Mouse will have dinner waiting after exerting the energy to climb our dock lines.   A loud click can be a satisfying sound………..

The story / blog of Yacht A Fun, a Gemini catamaran sailboat, traveling the ICW and east coast with insights to the extended cruising life. Catamaran mouse trap