Saturday- What a day!

I awoke at 6AM to get us ready to depart Boot Key Harbor at 7AM. With a good ten hours of travel time we could have been half way to Coconut Grove. BUT

Walgreen’s had decided on Friday to fill my Coumadin prescription with Warfarin- without confirming that was what I wanted. Slap my face- I should have checked the bag while there on Friday afternoon. The issue relates to the FDA’s allowance for up to 20% variance in the drug’s performance- which is really 40% overall. Longer story, but I take Coumadin to be sure the dosage is exactly the same each time.

The pharmacy didn’t open until 9AM and so by the time I walked some 4,000+ paces round trip (yes I counted them to be able to make my point) Diann and I weren’t able to leave the harbor until 11:30AM with Islamorada’s Lorelei Anchorage as our target.

We made the target- but not when planed. 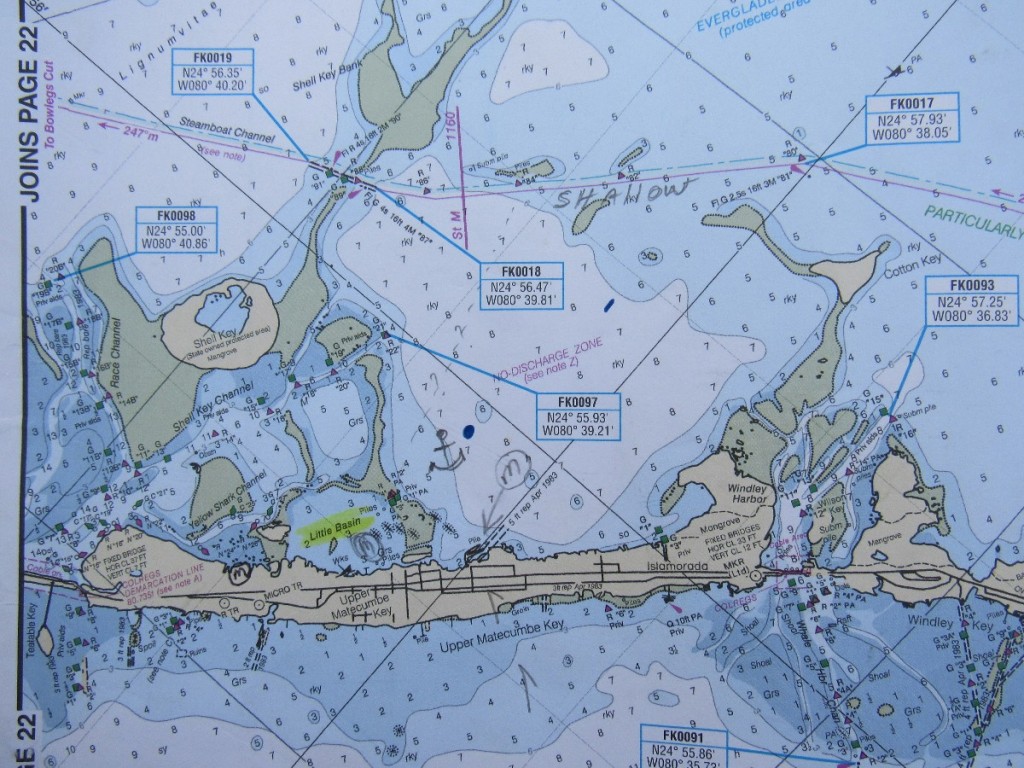 There was so much sea grass floating that I dodged large masses of it but had to plow thru the numerous smaller patches. As a result grass accumulated on the out drive.

Three times we stopped and cleaned the grass of the drive shaft by using a boat hook.

Crab pots became a problem  so I drove standing on Diann’s foot stool and with my head out the bimini view window. The vantage is excellent for seeing ahead- but it alters one’s ability to have the same sound perception of the engine and exhaust.

Yet, the exhaust just didn’t sound “full of water”. Upon checking the exhaust discharge I could tell that it wasn’t discharging as much water as needed to keep the engine exhaust system cool. And there was a bit of white smoke if you looked closely. The engine cooling system absolutely had to be serviced immediately!

The sun was low on the horizon; later we had to clear the narrow Channel to get to the anchorage;

and there was no way to keep running the engine without damaging the exhaust system- possibly melting rubber hoses and having a fire possible, too.

If I dropped the 35 Lb. Delta anchor, I’d have to get it properly set and then retrieve it to leave the area. Dealing with the Delta if dark fell was not on my agenda!

Shut down the engine with Diann’s help;

Diann began clearing the storage locker so access to the water strainer could be properly done;

I Removed the heavy tool chest off the storage locker “floor” and accessed the strainer;

With the engine shut off, we drifted with the strong wind;

Unscrewed the top and removed the strainer’s stainless steel cylinder and found it full;

Opened the sea cock (with strainer open to the flow) and still had minimal water flow;

Removed the 1” diameter water hose from the sea cock and used a shop vacuum to blow air to see if it was clear back to the strainer (it was);

Vacuumed the open sea cock via its elbow ( a perfect fit for the shop vac hose) – no flow improvement;

Blew air into the open sea cock, with no result ( but overheated the vac and it shut down);

Used a length of small diameter plastic tubing to ram into the 90 degree sea cock elbow (still no flow);

Stripped naked and decided maybe swim trucks would be a positive;

Found and removed a “badminton birdie” shaped plug of sea grass in the thru hull intake; and

Returned to the boat and restarted the engine.

Our next problem was that the sun had long set and all we had was a pink glow on the horizon. Thank goodness for a full moon!

I went to the bow to point out crab pots so we didn’t wrap one of their lines around our propeller.

After we made the red channel marker number 90 which was supposed to be flashing red but was not. We entered the narrow marked channel and thankfully had a flashing green marker at the end of the run.

As we cleared the narrows, it was dark except for moonlight. Our iNavx chart plotter didn’t immediately switch to the chart with the whole anchorage until long after we felt our way in- so I used the paper MapTech Chart Kit with a flashlight for illumination. We followed the moon beam so we could be alert to obstructions and guestimated our track into the anchorage and stopped short of a large number of boats that were closer to Lorelei’s Marina and Restaurant.

Thankfully the 35 pound Delta set the first time and we were able to settle down to have a beer. That was well after 9PM! Music from Lorelei was easy to hear.

All of the items pulled from our storage locker had to be moved out of the galley and put back away so dinner could be grilled. We dined at 11PM.

At 6AM, on Sunday, I arose and made coffee while verifying the winds for possible continued travel . The forecast was not pretty. So, I set the coffee aside and went back to bed. Diann had been correct, Saturday night, about staying put. I was so tired I slept until 12:45PM. 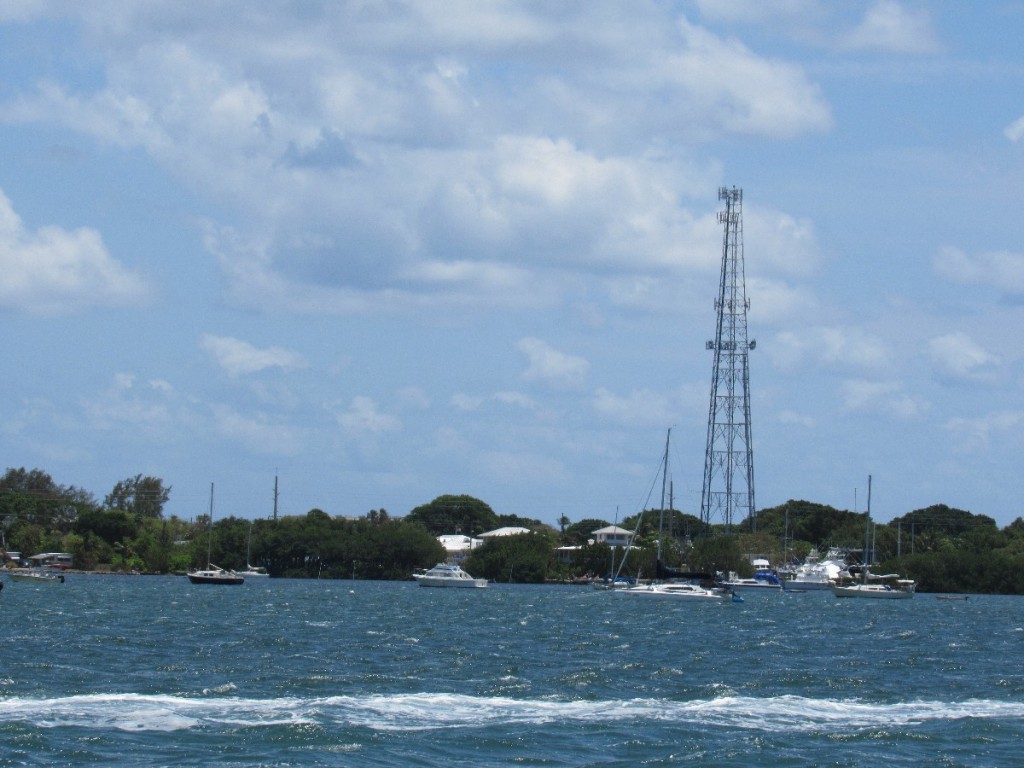 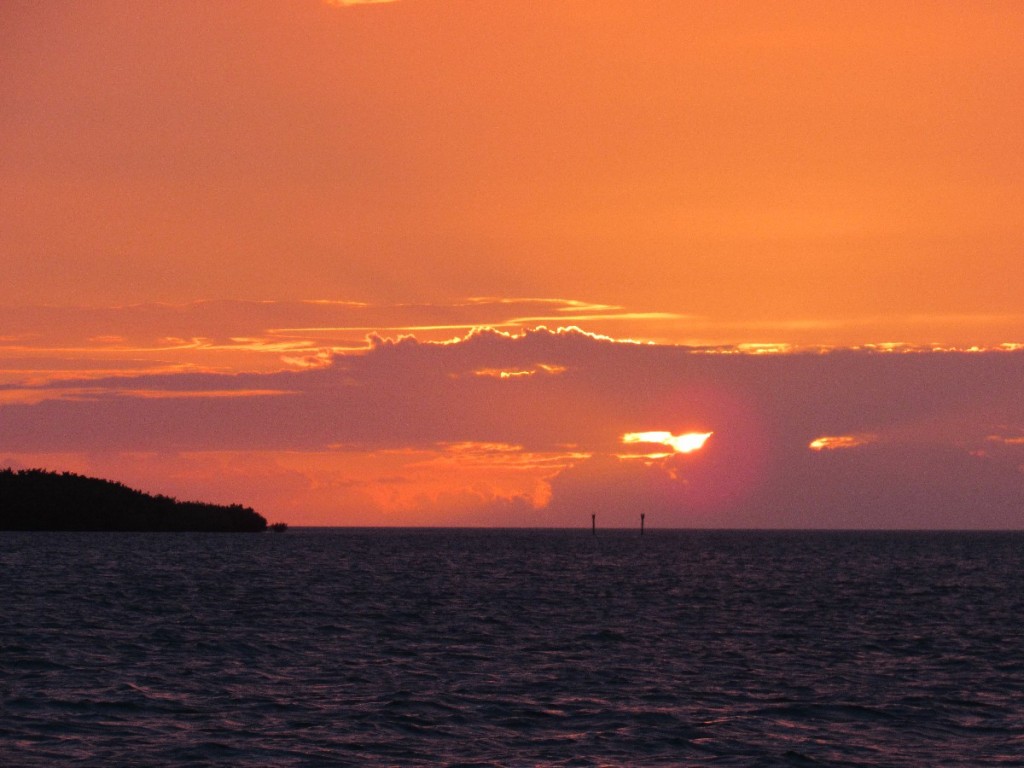 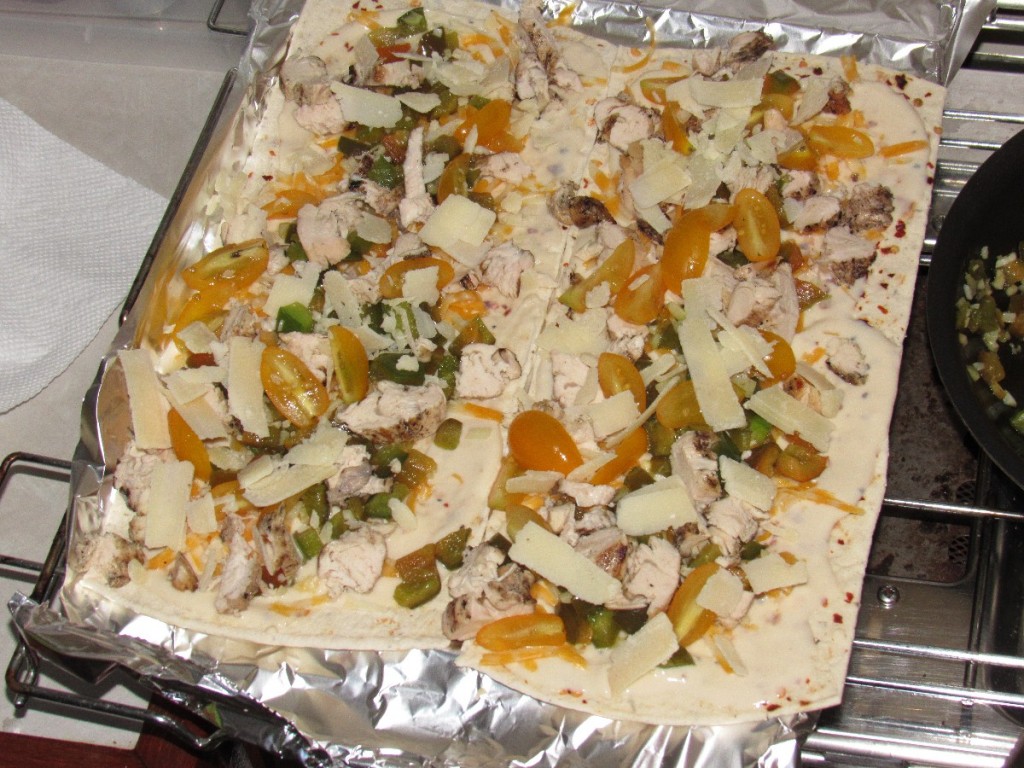 Monday was a storm day with rain…. 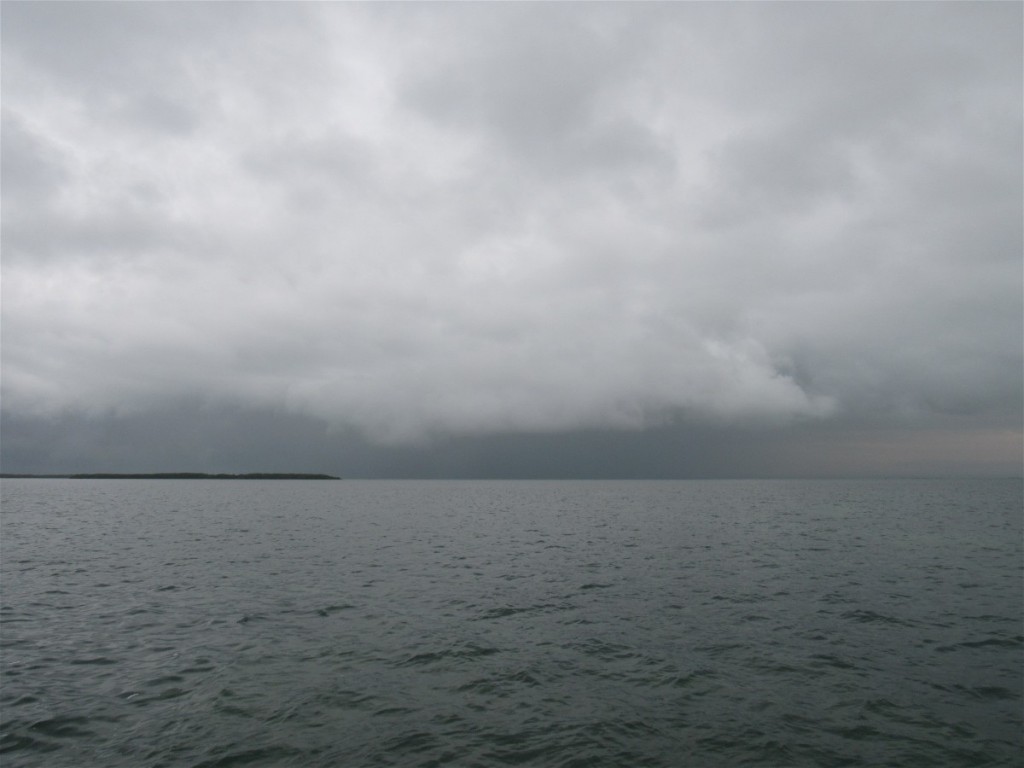 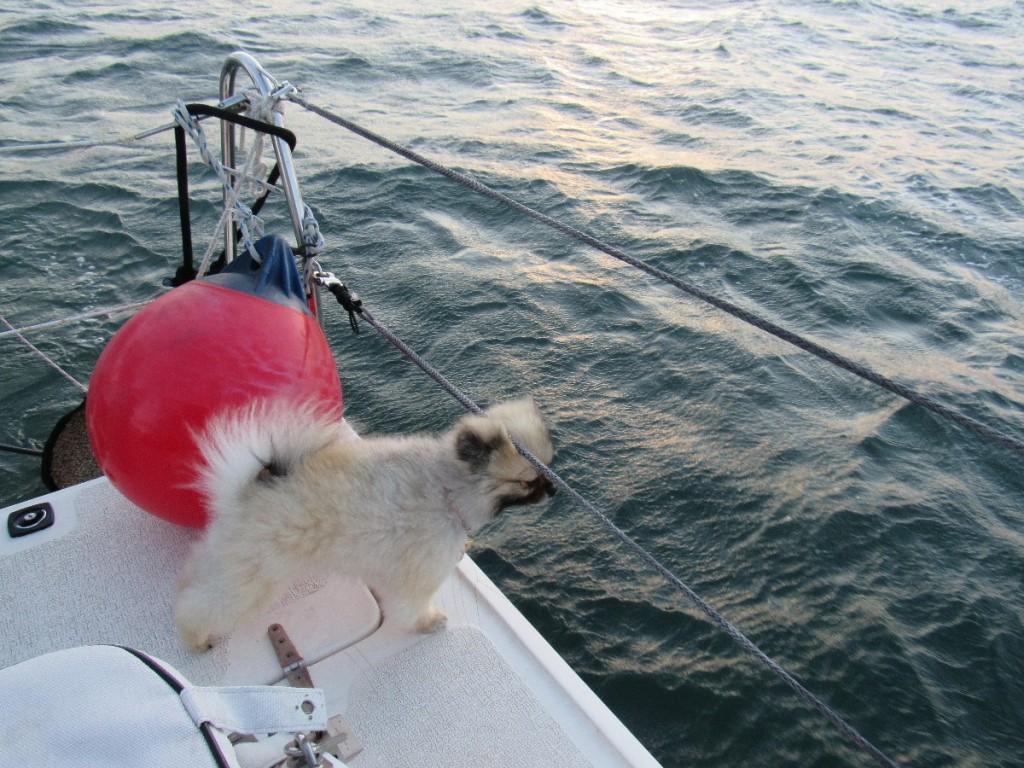 Zoey listens to something 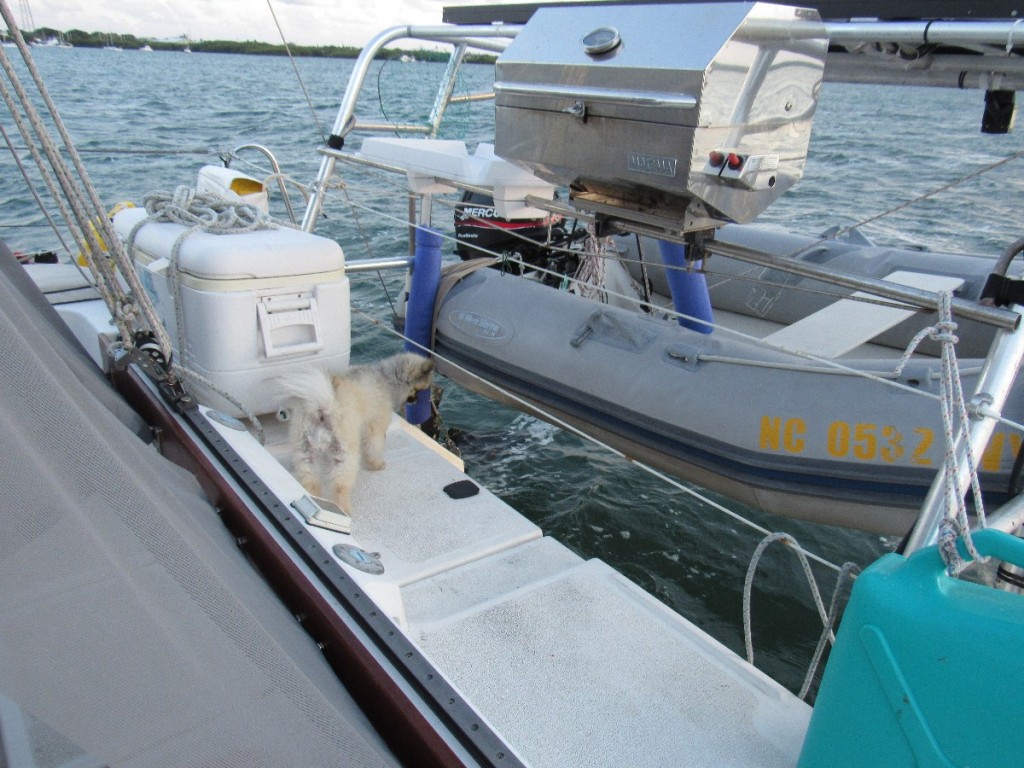 Says she’s through for a while 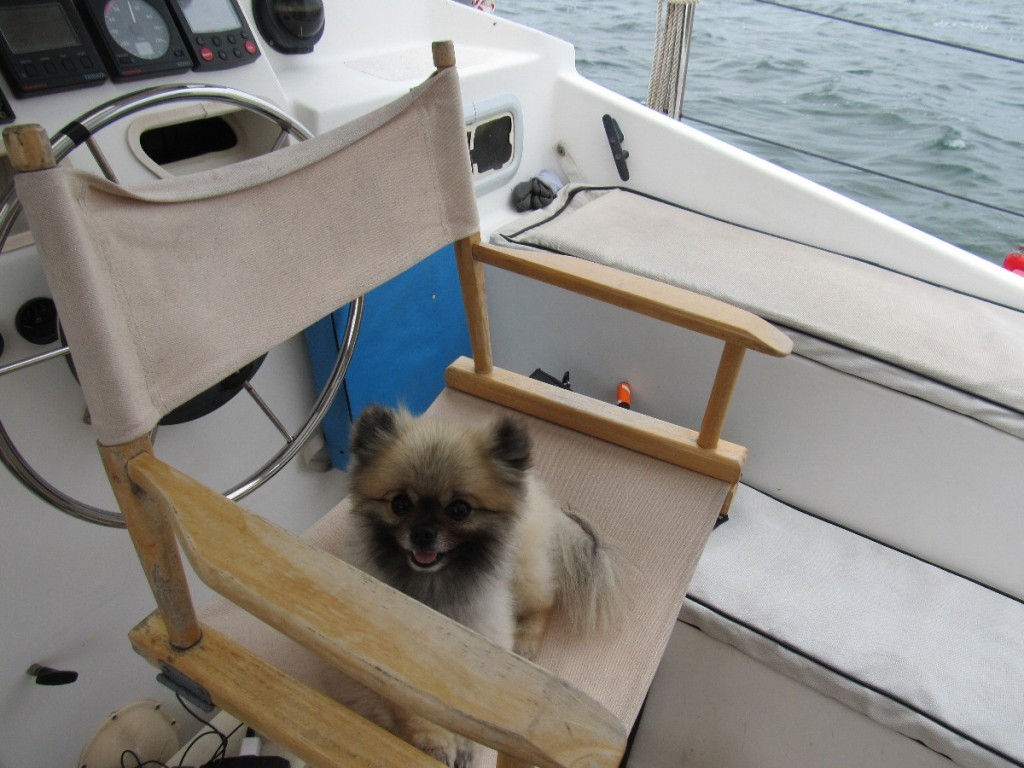 And settles into the Captains’ chair!