While I was reading my second book in three days, I received a text from Don on RagTop. He is on his Catalina sailboat in St. Augustine today and reported high winds, and water flooding the street. We both joked about how this FLORIDA isn’t the one we thought- warmer weather as you go further south.

Winds were 27mph this morning in Fernandina Beach, about the same time as Don’s text about St. Augustine, which is only 60 miles south. His winds were reported even higher than ours when I checked Weather Underground- gusting to 38.

Last night was not one of our better sleep ins. Diann and I stayed up and read until after 11. Exhausted from the constant motion of the boat and mentally tired of the booming sound of water hitting the bridge deck between the Gemini catamaran’s two hulls- we slept, but not well.

The wind and waves were strong enough that I was too concerned about damaging the dinghy if we raised it behind the boat onto its davit system. I left it double tied at the bow, on the starboard side all night. That meant that it bounced against the fenders and hull.

I had also side tied our dinghy since they can flip over, in high winds, if not secured well. Having a bow line and a side tie prevented the dinghy from veering away from the larger boat’s hull.

Rigid Inflatable’s bows are upward tilted and the rubber tubes offer a large air catching surface. Imagine a dingy, tied by a bow line to the rear cleat on the mother-ship, which has veered off the mother ship and gotten about 45 degrees off dead wind. A rolling wave could put the engine-weighted stern down while allowing the light weight bow to catch wind. The combined water motion and wind pressure could roll the dinghy over. As wind strength grows the risk grows geometrically.

I was far more concerned about damage to the dinghy, as it bounced up and down against the fenders, than I was about any of the other factors of the evening. I awoke at midnight, 2AM, 4:30AM, 6:30AM, and finally just got up and made coffee at 8. Each time I got up, I looked thru the starboard berth window to see how the dinghy was doing. It was obviously tethered and surging upward on each new wave.

Daytime photo of the dinghy bow rising up on a wave

Don and I had joked about the current weather not being the FLORIDA we had expected. The reality is, though, that this is winter weather for northern Florida. The boating magazines just don’t do articles about this part of the season.

So far, Diann and I have had five days of wind related “lay-days”; and a pair of 1 ½ days of travel time lost to fog. Eight days lost, during which we would have made it to Ft Lauderdale easy enough. Plus, we had a Charleston, SC solenoid failure which cost us four days of travel time. Almost two weeks lost out of four week’s travel time. (Next year we’ll leave North Carolina well before November!)

Our experience is indicative of extended cruising on a small to medium sized boat. Those who think living on a boat is a vacation, haven’t traveled on one for more than a week.

It’s 2:30 in the afternoon. The sky is gray. Yacht A Fun is rocking up, down, and sideways, as the choppy wavelets cross underneath. 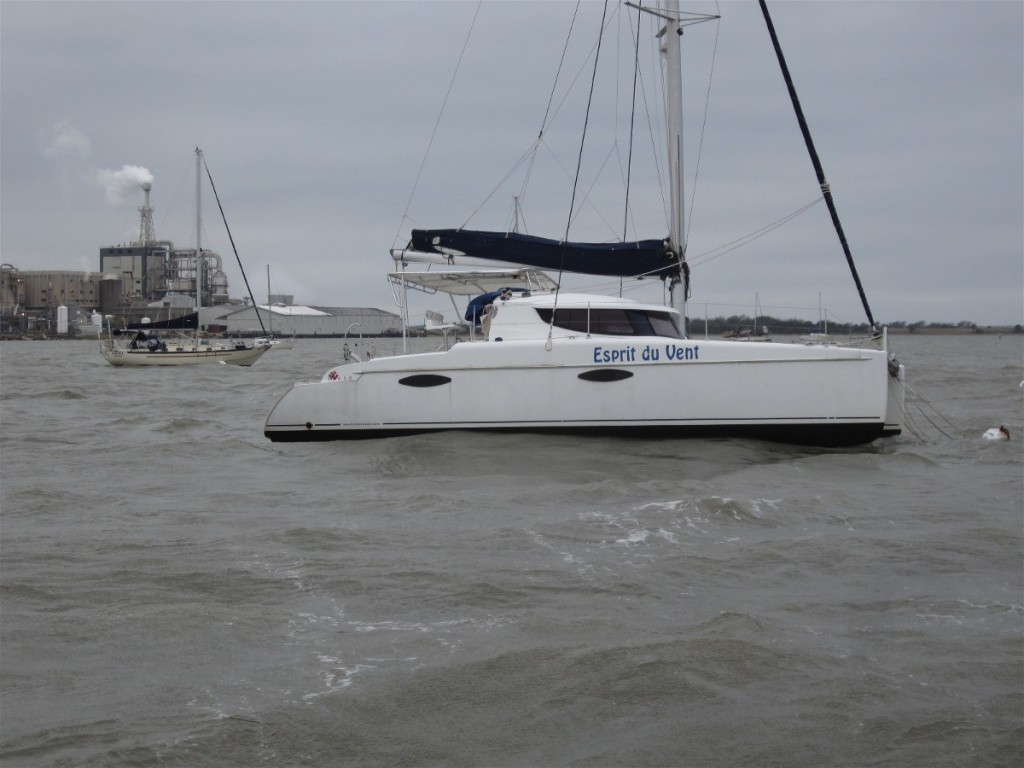 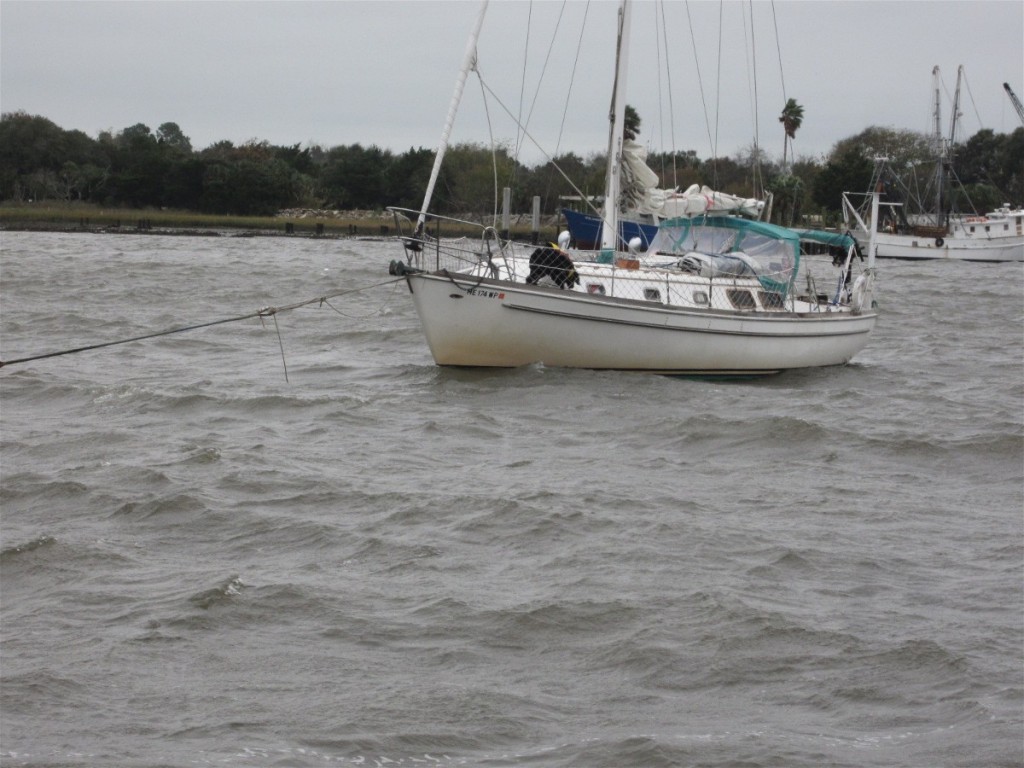 Note how tight the mooring line is 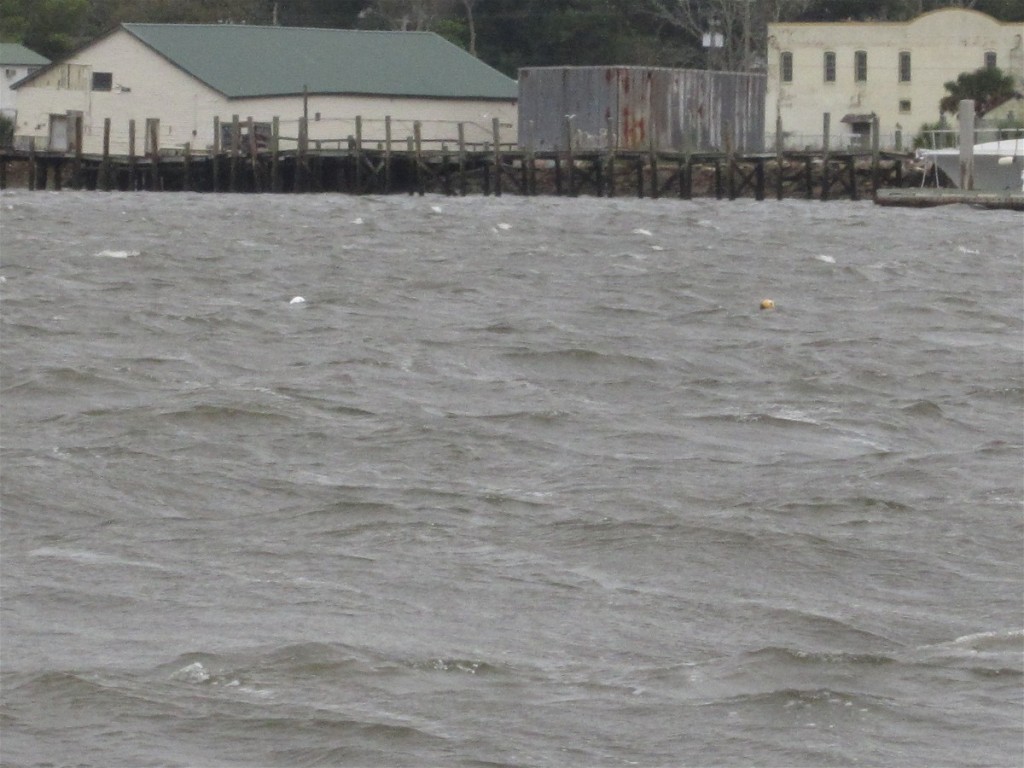 Slack water is at 4:11PM this afternoon- no current flow for maybe 30 minutes. We’ll use that slack water time to raise the dingy. That should give us the least bouncy water as we do the process of positioning the dinghy under the davit system and raising it up by the pair of pulleys.

Robert Lipkin (aka Bob Bitch’n) of Cruising Outpost magazine says, “the difference between and ordeal and an adventure is attitude”. Thank goodness Diann has a sweatshirt with that saying on it.