It rained and the winds were not friendly. But Chris, from the Boatyard, was able to work under a tarp (I had on board) and got us repaired so the marina fees could end. 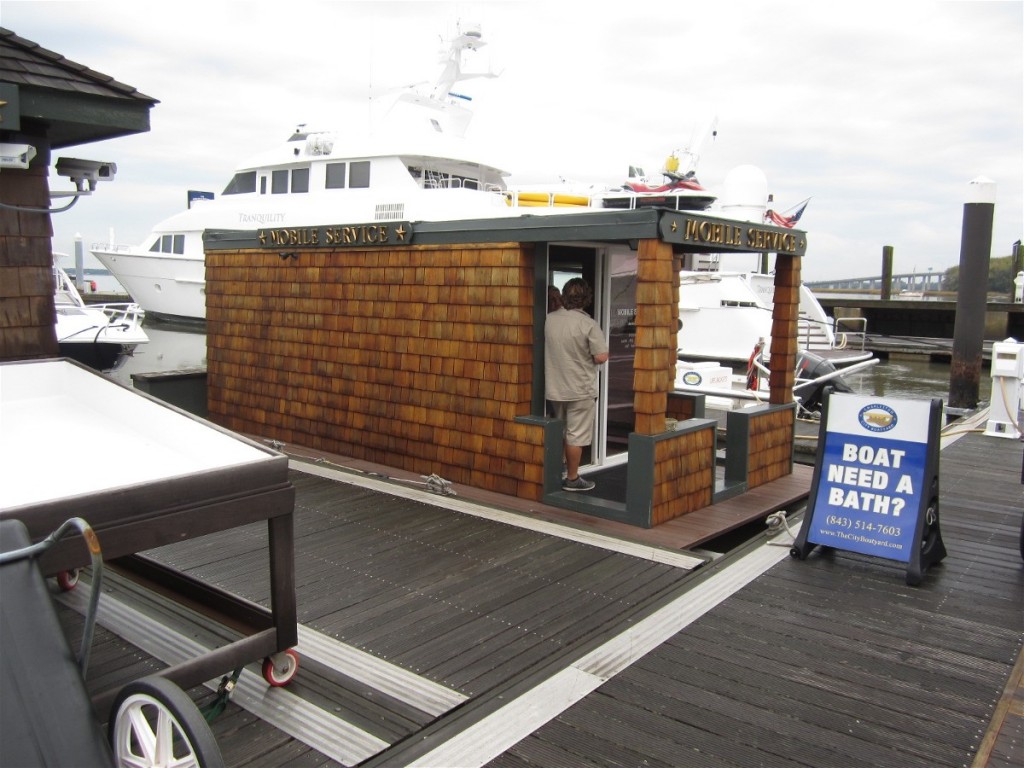 A larger company than the marina office reflects, The City Boatyard has a facility at the Charleston City Marina 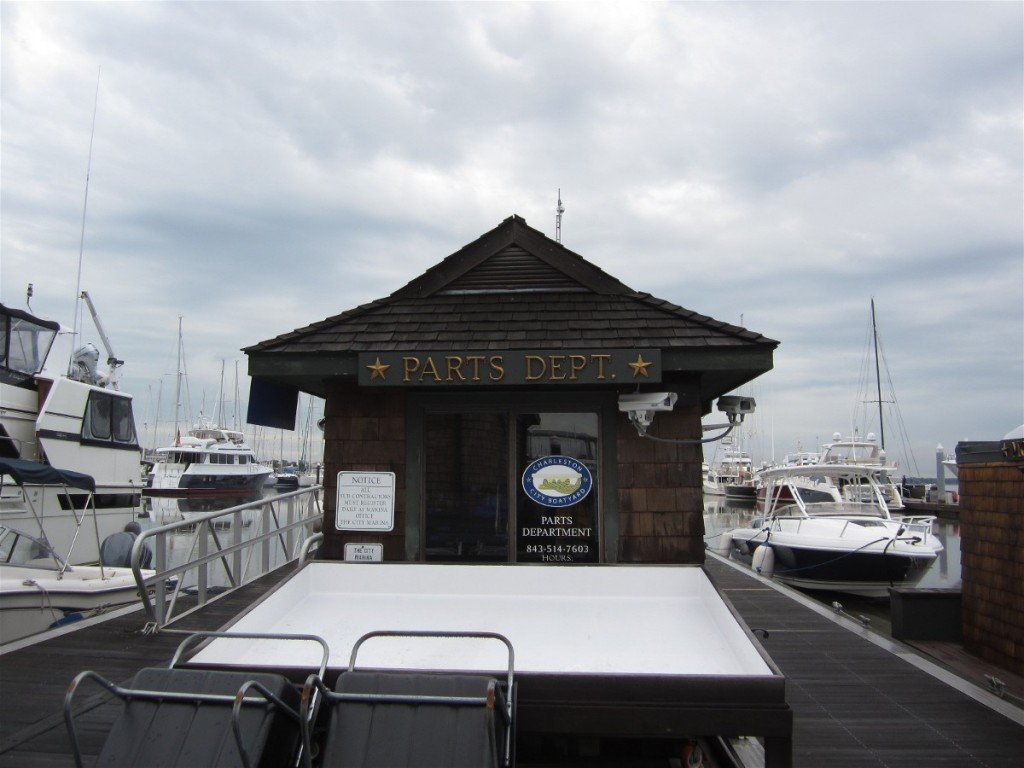 We were able to get off the dock Tuesday afternoon. That saved us $80. Our boat repair had been classic b-o-a-T. Bring out another Thousand. By the time we paid for four nights at the marina , $285 for parts, and a few hundred for labor- we were a tad over the Thousand mark. Those who don’t yet own a boat, need to plan for the events that happen as the vessel ages. Competitive auto repair, boats aren’t.

While walking to the showers we met a local who uses the Charleston City Marina dinghy dock for access to town. He told us the anchorage across the river would be quicker holding than the one he uses near the Coast Guard station. He indicated that most of the boats “over there” were permanent residents who use two anchors- and so watch our scope and resulting swing room.

Diann and I picked a spot between two sets of moored / anchored boats. We put out a six to one scope that would reduce to five to one as the tide came in. We backed the anchor down (but, as we learned, not hard enough).

The weather became awful. Winds picked up. Rains were almost torrential. The slap of wavelets from the flowing current were constant as they struck the Gemini 105M’s marriage of the sloping bridge deck to the port and starboard sides. Diann and I went to bed at 8PM. We slept well for most of the night. I got up regularly and checked my reference lights to see if we were dragging.

For almost the entire evening, the anchor held. But about 6:30AM it was obvious we had begun to drag down on another boat. Winds had begun to howl and the constant wave surge was too much for the amount of scope we had out.

How ‘bout them Heels? What else do you shout as you move about to fire up the engine to gain control of a moving boat. Crank engine. Head toward anchor. Retrieve anchor. Attempt to reset anchor.

Twice we picked the 35 pound anchor with 20 feet of 3/8 inch chain up and attempted to reset it. Four times we tried to pick it up but the current swept the boat over the rode in such a way as to make manual retrieval too much back-effort for me. The last time I just let the rode back out and declared breakfast time.

In the end, I had Diann make coffee and I had a Belvita soft baked bar for breakfast. Refreshed, I opted to try and pick up the anchor for reset- one more time. It was a bear. I got the anchor up. But, the effort was brutal.  And then inspiration struck.

The previous night, before the weather had turned to fecal matter, we had planned to catch the 9AM opening of the Wappoo bridge. It was 8:30AM. If we kept the anchor up and went on to the bridge, we could make the opening.

The first four hours of travel included rain. Enough rain that I couldn’t see ahead through the windshield. I could only see by sitting on the outer seat and steer with my left hand. Thank goodness for Gortex! And layers of under clothing . 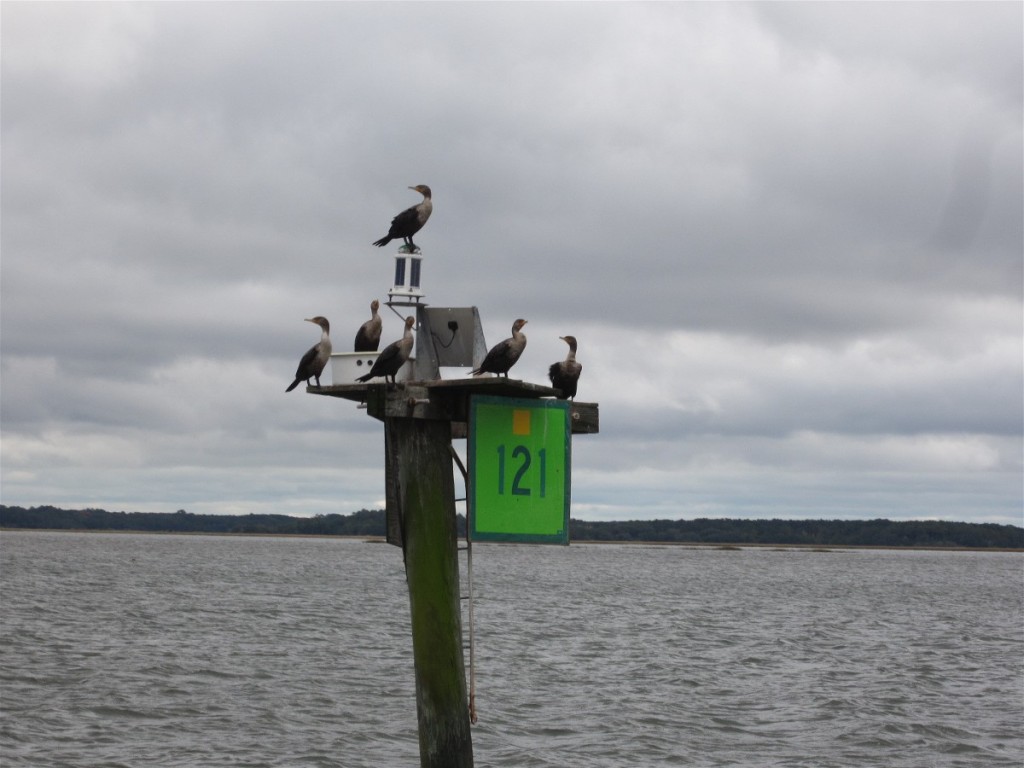 One of the scenes today

Later Diann made more coffee, then soup and sandwiches. Warm liquid and warm food were special today. And then the horizon became cloudy blue.

Tonight we are anchored about halfway from Charleston to Beaufort SC. The place is on the South Edisto at Alligator Creek.  I still don’t understand why the boat lies sideways to currents–

Tonight, I put out 200 feet of rode in 13 feet of water. The tide will go up about 6 feet. So, counting our deck height, call it 22 feet of vertical against 200 feet of rode and chain. Close enough to 10 to one scope. Reversing currents may cause problems- but I doubt it. In the morning though, I’ll know! 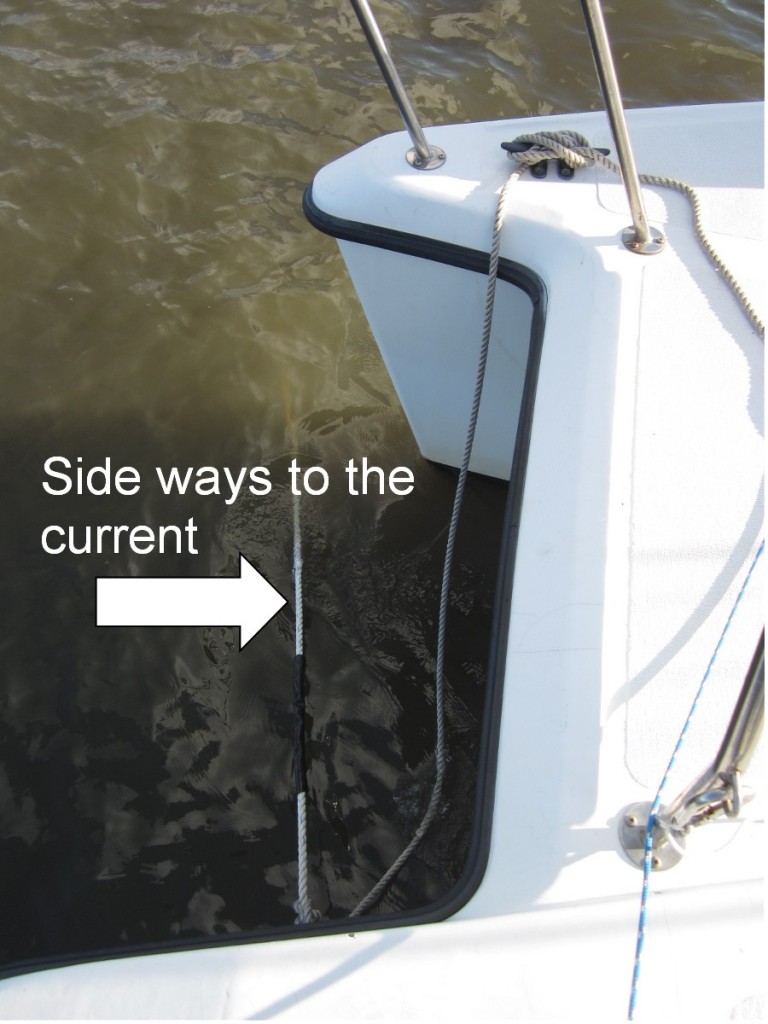 Anchor line runs out sideways to the current??? 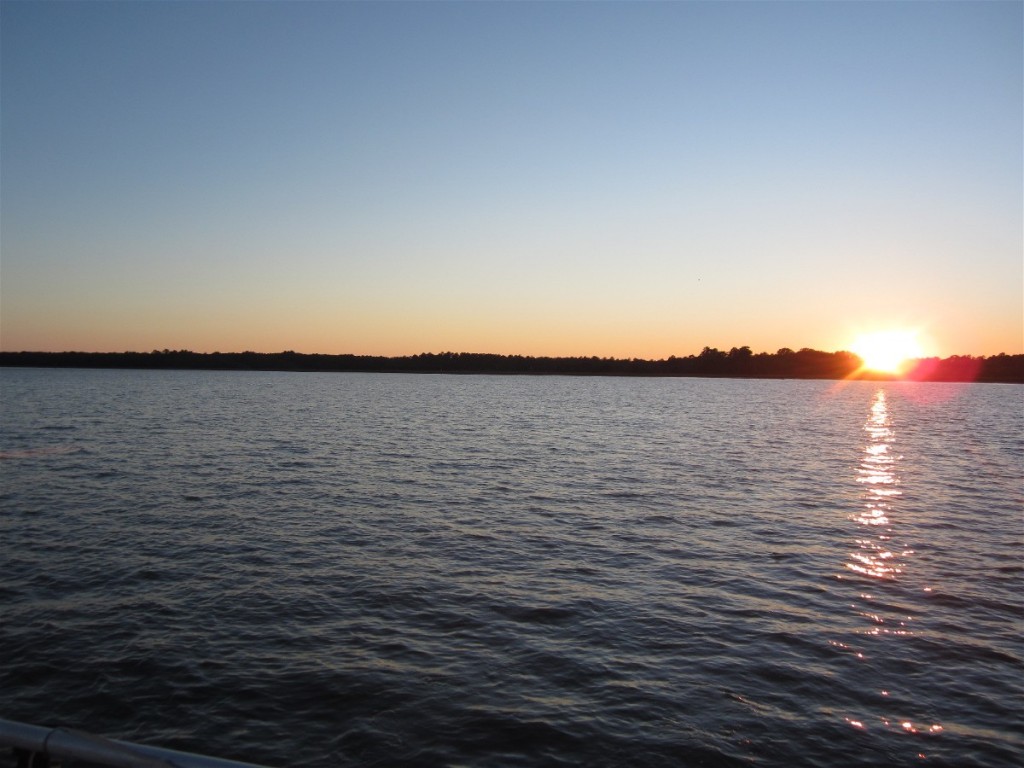 Sunset for Yacht A Fun

It’s left overs for dinner tonight. And a couple of stiff drinks!