Being “on the hard” not only means one’s boat is blocked on dry land, it also means you have to climb a ladder to get to the main deck. For us, it’s seven steps up. Then cross the deck to step down two 12” steps to the cockpit and saloon. So, every time you need to visit the boat’s interior- you get to exercise.

We started the morning by setting up a work table and set of saw horses at the stern of the Gemini catamaran. 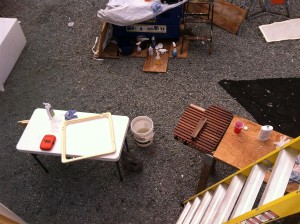 We set up early for our activity

As the morning continued, the metal industrial building on our starboard side provided no shade. A tarp was rigged to create shade. 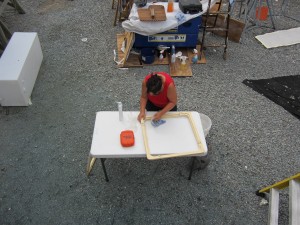 Her second task was to use a heat gun and scraper to remove the former boat name. The temperature got high today. Using the heat gun was taxing. 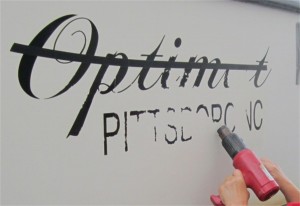 Our lunch time break was to make a run to Town and Country market for groceries, Walmart Express for 80 cent Power Aid, and over the bridge to a local seafood vendor who catches what he sells. (It’s shrimp tonight!)

After a bit more tasks, by 2:30 Diann was done.  She crashed out on the sofa area of the saloon.

My first task was to brush Teak Oil onto the shower floor grate. Two coats and I believe it is now rejuvenated. 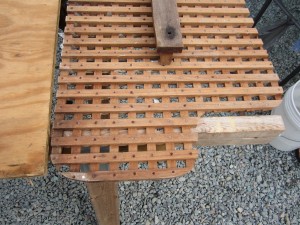 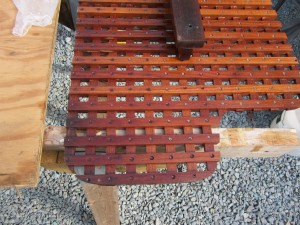 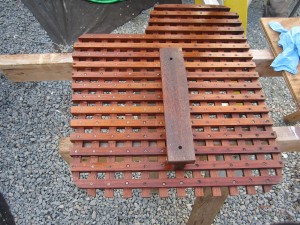 We’ll change the original toilet hoses when installing the Raritan Elegance water saving electric toilet. To change the hoses I’ll have to remove the holding tank. To see the task, I removed the inspection lid. A wood chisel cleared the caulk. A dental pick cleaned the buried screw heads. 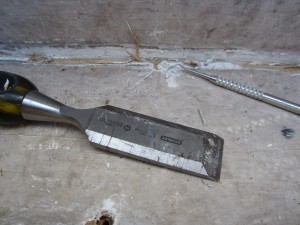 For my next project, I used Loctite PowerGrab adhesive to reinstall deck braces within the port side sail locker. I was not impressed. Grab and hold, it did not. Though I stood and held the 2x4s for five minutes each, the material failed to “grab and hold”. Using a large fender, I braced the 2x4s again. I won’t be surprised to have to chisel off the Loctite and buy something else. We’ll know by morning.

Though Derwood had scraped barnacles with the big scraper, and had pressure washed the hull- there were spots which the long handle had prevented access. I used a painter’s tool, and a Cutco Cutlery chef’s knife to access the trunk of the centerboards. Lots of growth was in there as can be seen from the debris. 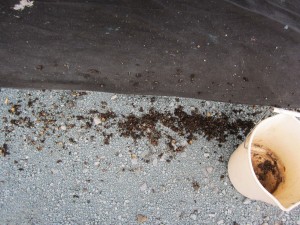 debris from scraping up into the centerboard cavity

The centerboards allow the boat to sail into the wind better than typical catamaran keels.  They also work well for slow speed maneuvering since the boards offer resistance to side wind pressure.  This image shows a board tucked into the hull. 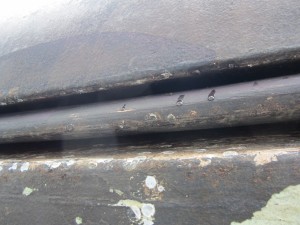 Geminni catamaran centerboard in up position

At four pm, I too was done. The shower sure was welcoming.

Around six thirty, I put the shrimp on the grill, after roasting two ears of corn. 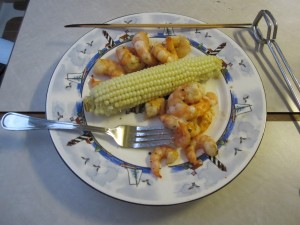