Tuesday, we left Jericho Creek and headed to Georgetown Landing Marina to hide out, not from the winds, but from the coming low 20 degree evening. 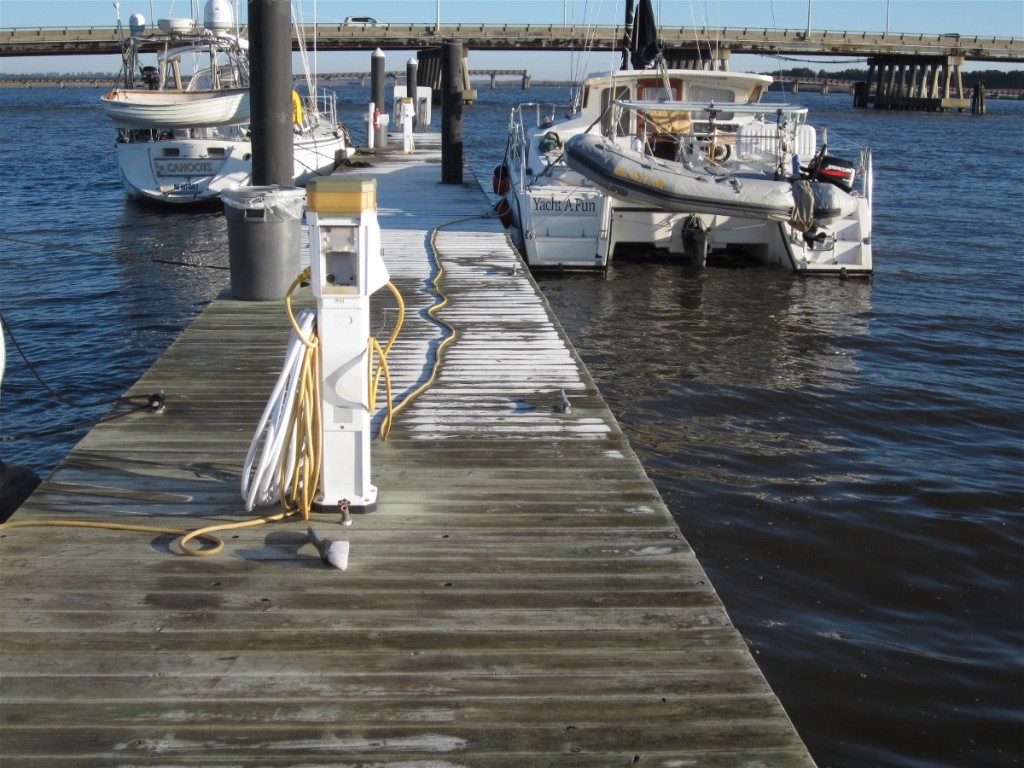 The ride on our Gemini catamaran was almost like being on a lake in that the water was basically smooth since we had the current with us and the wind blowing across the water not against the current.

It was amazing to know that twenty four hours earlier Yacht A Fun was at the same place in a serious blow.

Once tied up at the marina, Diann and I called Skyview Cab to arrange being taken to Walmart (for a space heater and food), to “the ice-house” (for a refill of our horizontal style 20 lb tank), and an unplanned stop by an ABC store for small bottles of celebration Scotch, Gin, and Drambuie.

The driver took Diann to Walmart, doubled back to the ice house, returned for Diann, waited for us to complete our store purchases, stopped by the ABC store, and returned us to the marina- for $25. His van was clean and he was very well known by the locals who waved to him from various cars as we made our rounds- a good experience.

Once on board, Diann gathered our laundry and walked back up to the facility.

Two hours later I dropped in to see her, at the laundry, after my shower and then I sat with the clothes while Diann showered. The Georgetown Marina showers are beyond warm without being too hot. The water flow is like a whirlpool bath. After a cold day, showers seem to be a boater’s best part of the evening. The restrooms and showers are clean.

Dinner was to be country styled steak. Before hand, I enjoyed a couple of Rusty Nails (Drambuie and Scotch). Diann joined in with Gin and Sierra Mist. 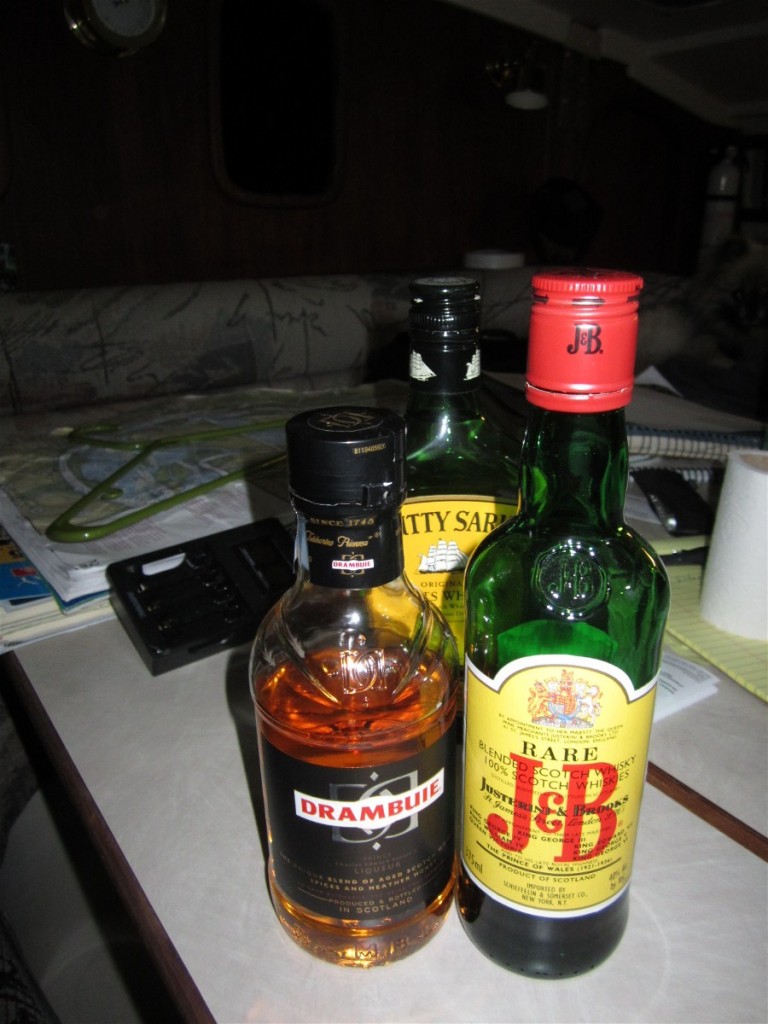 Note the heater on the galley floor! 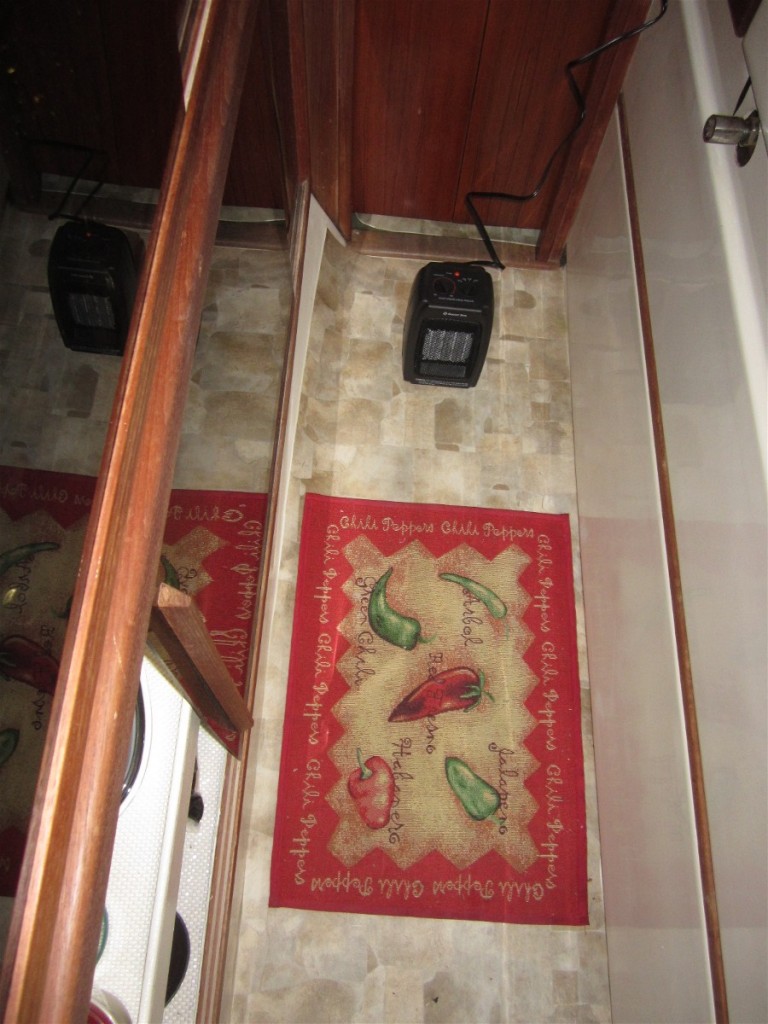 The meat was salted and peppered. Then the pieces were covered in flour. First sautéed in olive oil, the meat was removed from the wok and let stand. Two table spoons of butter were added to that pan and it was deglazed. All the extra flour, from the earlier preparation, was added to the wok and stirred in with the gravy prep. The meat was returned to the pan and water added to cover. Briskly stirred, then allowed to simmer, the concoction became country styled steak. 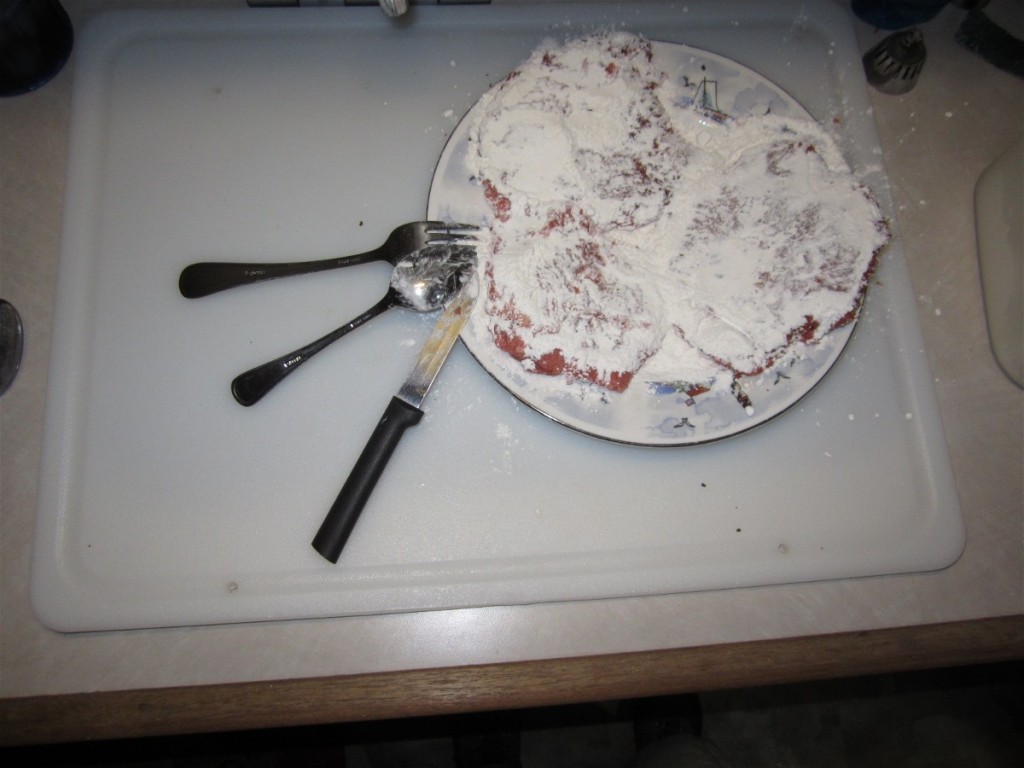 First cover the meat with flour 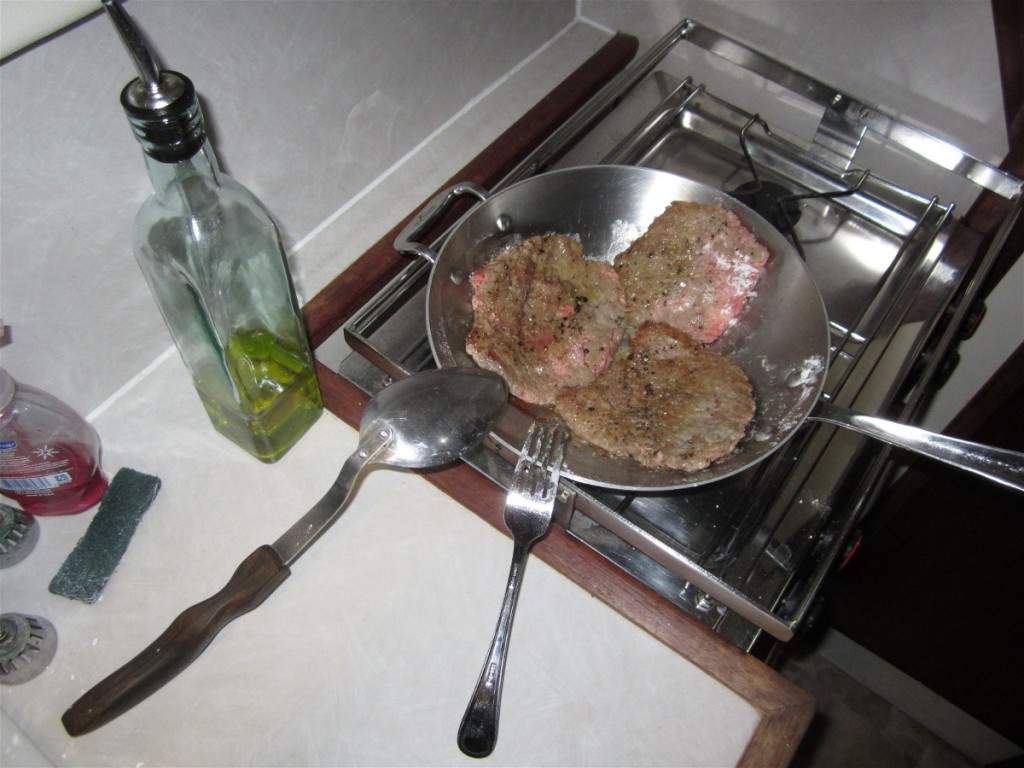 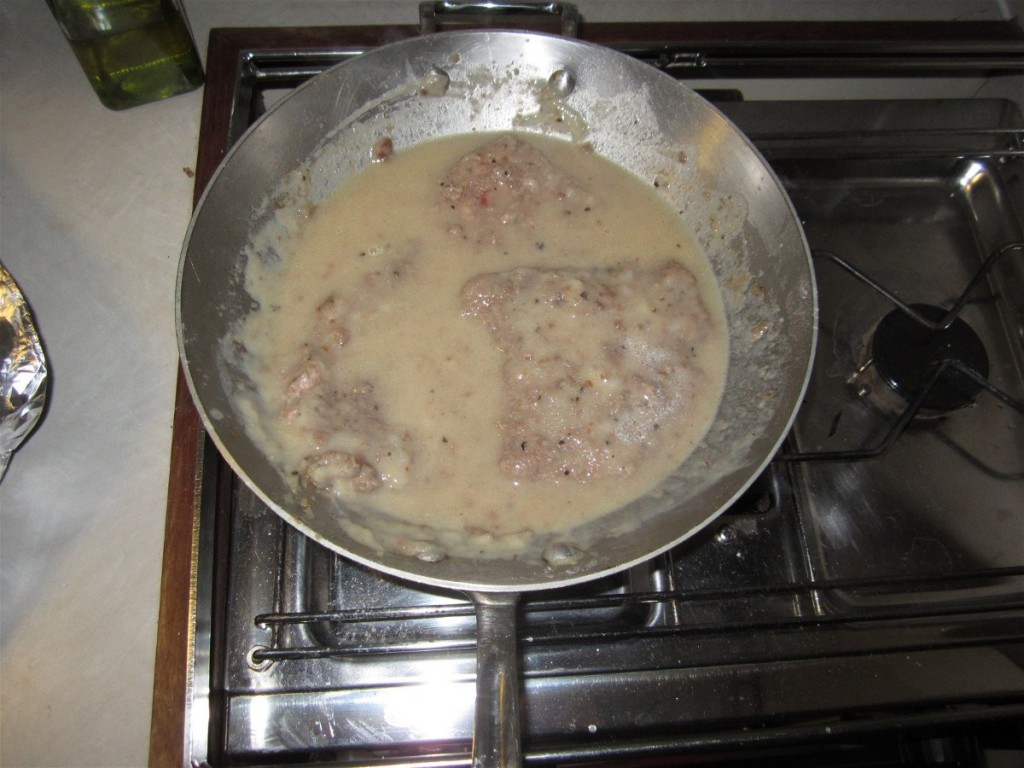 remove the meat; add milk, or butter; scrape the pan and add more flour and oil; then the cooked meat; add water; and simmer for a while

Diann made instant mashed potatoes using soy milk. Dinner was beyond good. By the way, I heated our plates in the oven to keep the prepared food warm while we ate. Heated plates and bowls don’t take much effort but the act sure makes even “maintenance feeding” more enjoyable.

Wednesday morning we slept-in a tad. After fueling up we departed around 10 AM and made our way passed McClellanville to Graham Creek anchorage near Awendaw, SC- a distance of 37 miles.

Grass lands along the ICW near McClellenville SC 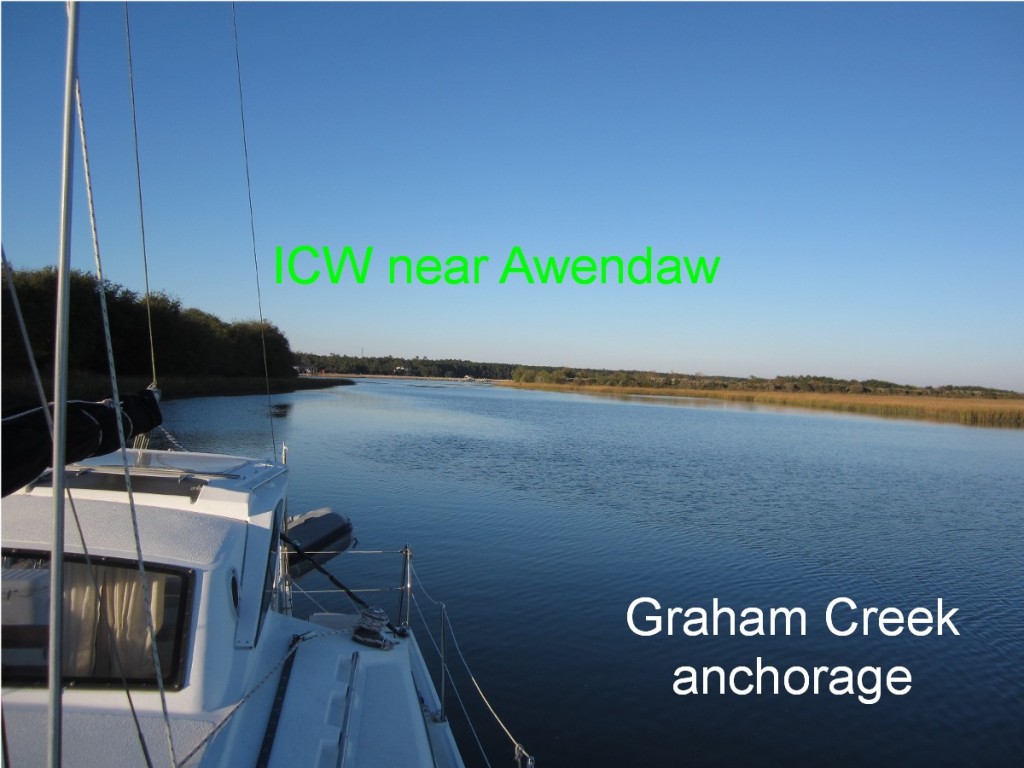 Tomorrow we plan to make it to Charleston and anchor across from City Marina, or next to the Coast Guard facility.