I found that working in the morning and doing errands in the afternoon is not the way to arrive back to the boat before dark.

So, on Saturday we ventured off the boat early. We also raised the dinghy up onto the davit system due to expected high winds and choppy Bay water.

Now, keep in mind that, we had Zoey with us so she could get off the boat, too. We included a bag (with a towel in the bottom) because the Metro rules state that, to be carried on a bus, a dog must be in a crate or similar containment system which can include a bag. We had no problems board the west bound #249 to arrive at Douglas Station. However, when we attempted to board bus 06370 for the East Bound trip back to Coconut Grove- we were denied because I wasn’t blind and so the dog wasn’t allowed. Rather than get into a full blown urination contest with the driver, I stepped back and we waited on another bus. 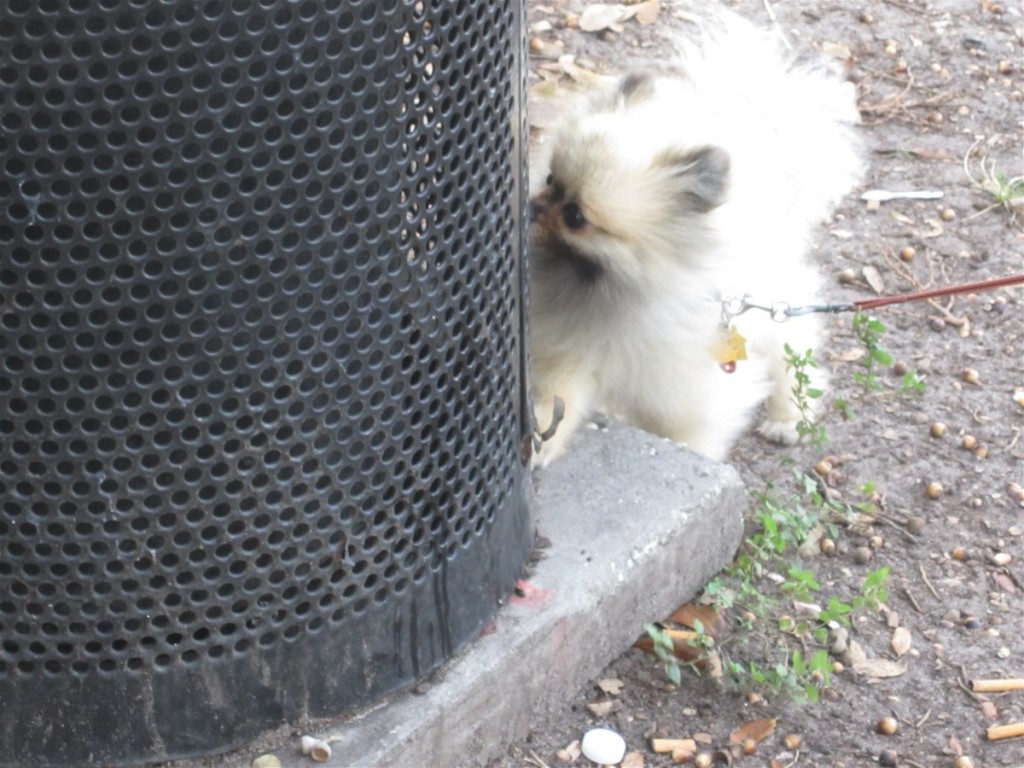 Zoey enjoys seeing / smelling the trail other dogs have left

Bus 06369 arrived at the station. The female driver was cordial, and confirmed that “dog in a bag” is proper. So, away we went to Coconut Grove.

It is troubling when the rule book gets so thick that employees get confused trying to do their jobs. The driver of the denial bus thought he was in the right. Thank goodness his was not the last #249 for Saturday!

Diann and I arrived back to the Dinner key water taxi and returned to Yacht A Fun- dropped off the dog, and the sports coat (which we had picked up when we had returned to Coconut Grove).

Hanging out at the water taxi / dinghy dock affords a view of some snazzy boats. This one was rigged for high speed and lounging once wherever it gets to where it’s going. 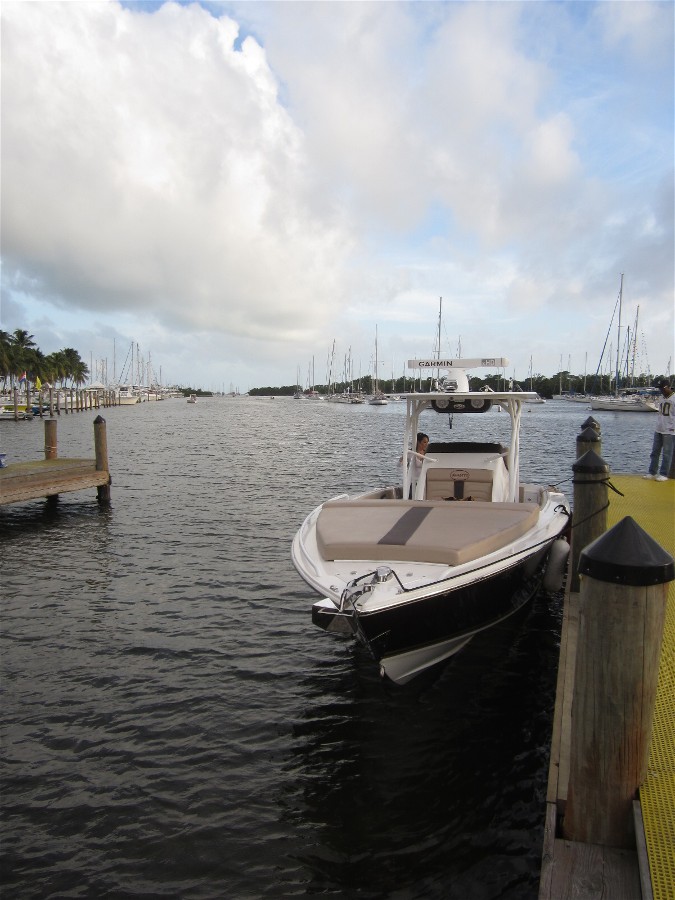 launched at the public dock

Note the seats to hold the passengers in place 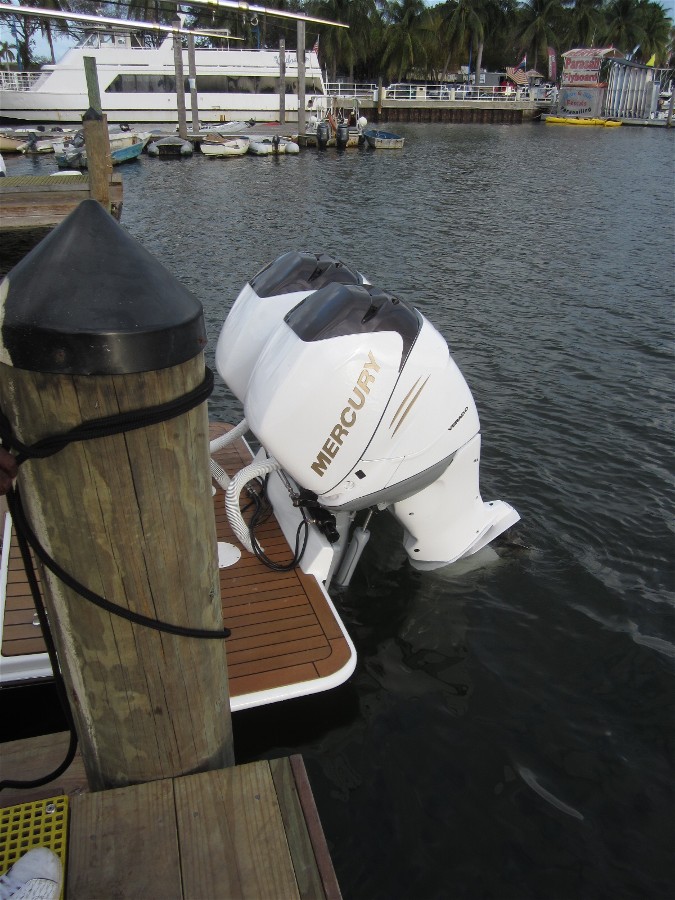 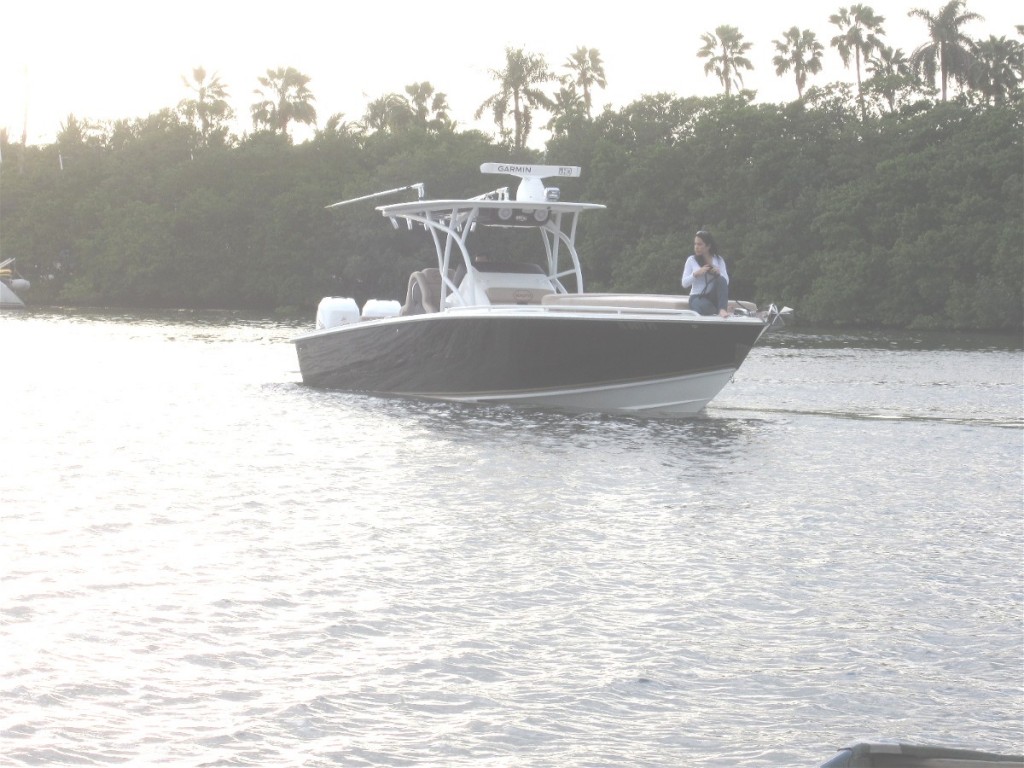 Ready to run for a sunset ride

Returning to the docks via the water taxi, we walked to Fresh Market grocery for pizza fixings. 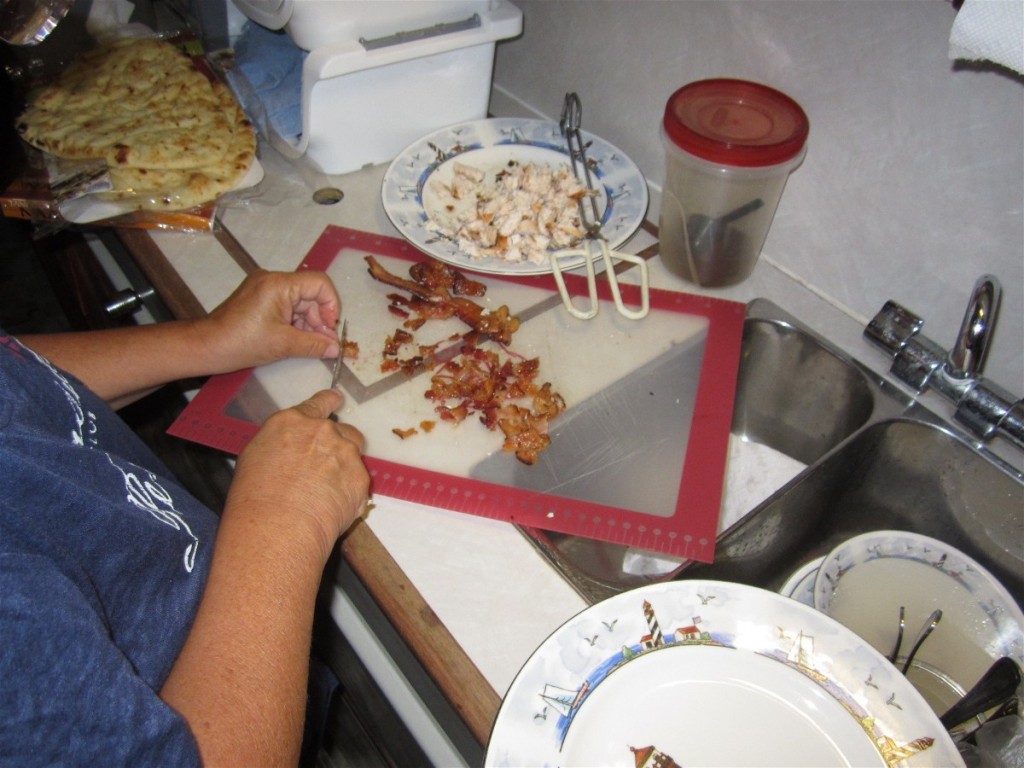 Grilled chicken and bacon for the pizza 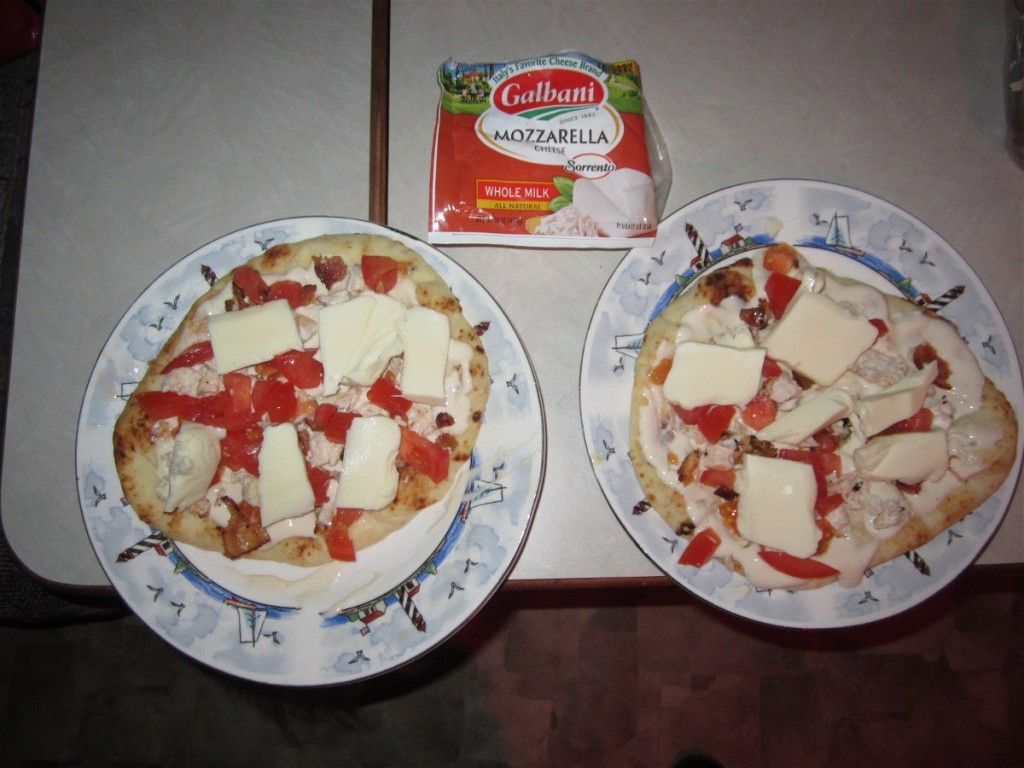 Ready to put on the grill 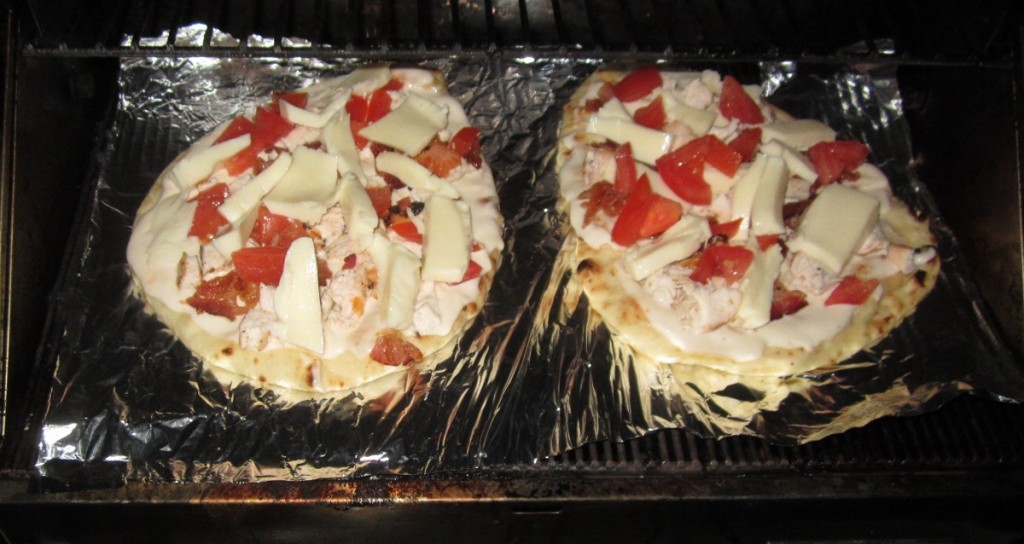 Son in law, Shawn, had taught us how to use Nann bread (which is already cooked) as a pizza crust. To that we added chopped grilled chicken, bacon, Alfredo sauce, mozzarella cheese, and fresh slices of tomato.  He likes Stone crabs, but not5 at these prices… 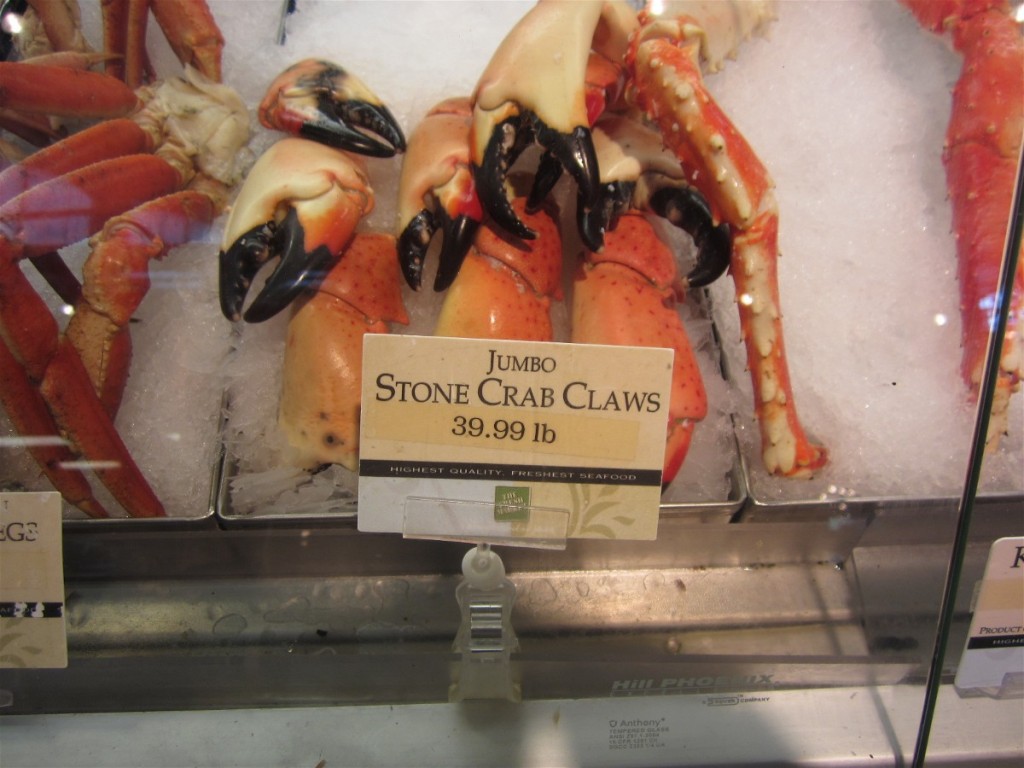 Grilled on low heat, the crusts don’t burn. The fixings don’t get as warm as if the pizzas had been cooked in our oven, though. But cooking on the grill keeps the oven’s heat from warming the boat interior.

And then the winds on Biscayne Bay picked back up. The boat bounced up and down. And we were glad we had put the dinghy on its davit system.